It Takes Two to Bring the Kingdom - Seedbed
close
Menu 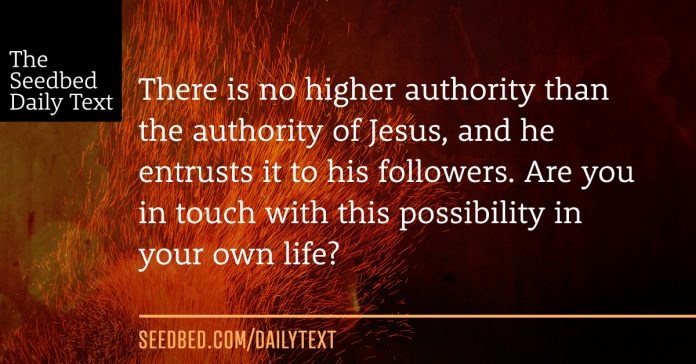 Then Jesus went around teaching from village to village. 7 Calling the Twelve to him, he began to send them out two by two and gave them authority over impure spirits.

8 These were his instructions: “Take nothing for the journey except a staff—no bread, no bag, no money in your belts. 9 Wear sandals but not an extra shirt. 10 Whenever you enter a house, stay there until you leave that town. 11 And if any place will not welcome you or listen to you, leave that place and shake the dust off your feet as a testimony against them.”

12 They went out and preached that people should repent. 13 They drove out many demons and anointed many sick people with oil and healed them.

74. Then Jesus went around teaching from village to village. Never underestimate the significance of the ministry of teaching. There is no substitute for it. Teaching paves the way for the in-breaking Kingdom of God. Preaching opens the door. Deliverance and healing demonstrate the Kingdom’s arrival.

75. Calling the Twelve to him, he began to send them out two by two. . . Why two by two? It seems like they could have covered twice as much ground if each had been sent to a different place? Remember, the Kingdom of God is not about the efficiency of labor but the extravagance of holy love. My theory on why he sent them two by two? The Holy Spirit prefers to work through relationships over individuals. Jesus taught on another occasion where two or three gather in his name he is there among them. He also told his disciples that people would know them as his followers by the way they loved each other. He sent them out two by two intentioning their relationships to be seedbeds; demonstration plots for the Kingdom of God. We tend to think God works primarily through individual people. I don’t think so. The Bible indicates God’s best work happens in and through relationships. Think about it this way. Nothing happens in the Kingdom of God apart from the interrelationships among the Father and the Son and the Holy Spirit. As it is in the Trinity, so it will be in the community of God’s people. On earth as it is in Heaven. . . . right?

Think through how the various relationships and small communities across your own life’s landscape can become consecrated to God for his purposes in the world. Ask God to demonstrate his Kingdom in and through your relationships.

76. and gave them authority over impure spirits. This is a far larger miracle in and of itself than we can imagine. A mere fallen human being is capable of carrying the authority of Jesus, the one in whom the Spirit dwells beyond measure, the Son of God, the second person of the Trinity. Jesus’s authority can be transferred. This is astonishing. There is no higher authority than the authority of Jesus, and he entrusts it to his followers. Are you in touch with this possibility in your own life? Isn’t this the whole point of discipleship; to learn from Jesus how to live under and through his authority, which is to live in the fullness of his Spirit for the sake of blessing others?

77. Take nothing for the journey. This kind of flies in the face of the good old boy scout motto doesn’t it? “Be prepared.” Or what if Jesus is merely changing the nature of what it means to be prepared. What if being prepared does not mean trying to anticipate every possible scenario that could happen? What if being prepared means to live in complete trust and dependence on the presence, power and provision of God? That sounds about right to me. It doesn’t seem reasonable or practical. While I think this is the ideal of the Kingdom life, I don’t think it is the non negotiable requirement. Life in the Kingdom of God strikes me as a risk-reward scenario. The greater the risk we are willing to take, the greater the reward. After all, after Jesus, only Peter can claim to have walked on water.

What if that’s also part of the two by two dynamic? Learning interdependence. It’s a massive challenge in the land of independent, rugged individualism.

Today’s text gives us a clear window into the unconventionality of Jesus’ teaching. It seems unreasonable. But what if our idea of reasonable is unreasonable? Could that be possible? Let’s wrestle with that.

Spirit of the Living God, fall afresh on me. Lord Jesus, I want to learn trust, trust in you but also trust in other people. I want to learn how you work through relationships. I confess, my tendency is to think of how you want to work through individuals. Open me up to a bigger understanding. For the glory of your name, Jesus. Amen.

“Take nothing for the journey.” How do you relate to that kind of instruction from Jesus? Are you a “be uber-prepared” kind of person? How might Jesus want to change our idea of what being prepared means?