Are You Taking People "Along for the Journey" with You? - Seedbed
close
Menu 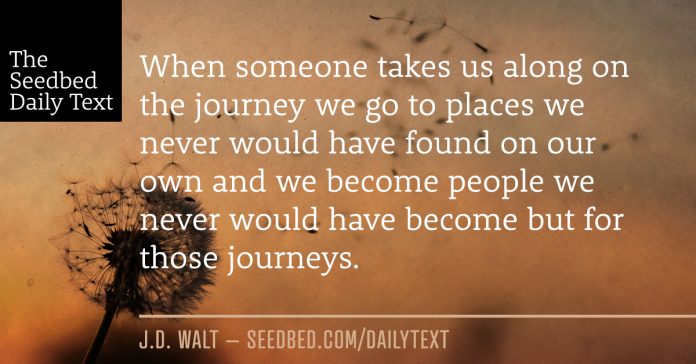 Paul came to Derbe and then to Lystra, where a disciple named Timothy lived, whose mother was Jewish and a believer but whose father was a Greek. The believers at Lystra and Iconium spoke well of him. Paul wanted to take him along on the journey, so he circumcised him because of the Jews who lived in that area, for they all knew that his father was a Greek. As they traveled from town to town, they delivered the decisions reached by the apostles and elders in Jerusalem for the people to obey. So the churches were strengthened in the faith and grew daily in numbers.

Though I didn’t realize it at the time, those were some of the most important learning moments of my life. I could scarcely articulate what I learned on those journeys. I could only teach it to someone by taking them along on the journey.

One of my closest friends today is a man by the name of Mark Benjamin. I mentored Mark for several years through his time in seminary and beyond. I suppose I still mentor him now, yet at many points I find he also mentors me (that’s how the journey works).

It gave me great joy a few years back when Mark invited our oldest son, David, (14 at the time) to go along on the journey with him and another leader on a mission to Haiti later. Missing a week of school paled in comparison to what was learned along the way on that journey.

Isn’t that what Jesus did? He took twelve along for the journey. Isn’t that what discipleship really is? The relationship between Paul and Timothy still teaches us after two thousand years. Their seemingly ordinary relationship made history. These kinds of relationships always do, whether the history gets recorded or not.

© Seedbed 2021
Are You Taking People "Along for the Journey" with You?
MORE STORIES