Taking a Selfie of Your Soul - Seedbed
close
Menu 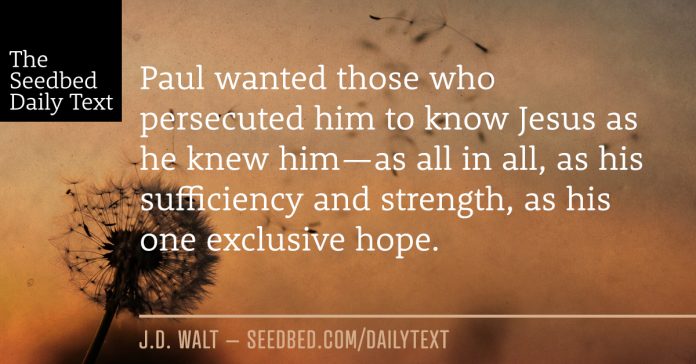 “When I returned to Jerusalem and was praying at the temple, I fell into a trance and saw the Lord speaking to me. ‘Quick!’ he said. ‘Leave Jerusalem immediately, because the people here will not accept your testimony about me.’“‘Lord,’ I replied, ‘these people know that I went from one synagogue to another to imprison and beat those who believe in you. And when the blood of your martyr Stephen was shed, I stood there giving my approval and guarding the clothes of those who were killing him.’“Then the Lord said to me, ‘Go; I will send you far away to the Gentiles.’ ”The crowd listened to Paul until he said this. Then they raised their voices and shouted, “Rid the earth of him! He’s not fit to live!”

As I have read through Acts these last months a new and yet obvious insight has come to me. While Paul was traveling and preaching and getting beaten to within an inch of his life, and making tents and all the other stuff that was his apostolic life, he was also writing letters. While it’s difficult to know exactly what he wrote to who and precisely when and where he might have been along the journey at the time of the writing, it’s interesting to think back through his letters juxtaposed against his day to day life.

In some ways Paul’s letters to various churches and Christians provide us a sense of his “journal.”

For instance, as we’ve been working our way through this riot in Jerusalem and Paul’s ensuing address to the angry mob of Jewish men who would formerly have been his compatriots, I have not been able to get out of my mind this bit from his letter to the Philippians:

If someone else thinks they have reasons to put confidence in the flesh, I have more: circumcised on the eighth day, of the people of Israel, of the tribe of Benjamin, a Hebrew of Hebrews; in regard to the law, a Pharisee; as for zeal, persecuting the church; as for righteousness based on the law, faultless.

But whatever were gains to me I now consider loss for the sake of Christ. What is more, I consider everything a loss because of the surpassing worth of knowing Christ Jesus my Lord, for whose sake I have lost all things. I consider them garbage, that I may gain Christ and be found in him, not having a righteousness of my own that comes from the law, but that which is through faith in Christ—the righteousness that comes from God on the basis of faith. I want to know Christ—yes, to know the power of his resurrection and participation in his sufferings, becoming like him in his death, and so, somehow, attaining to the resurrection from the dead. (Philippians 3:4-11)

This is a snapshot of Paul’s developing soul. In the deepest place of his soul, Paul shredded his religious resume. Please read the passage above through slowly. I think this is what drove Paul to return to Jerusalem despite all the warnings against it. I believe Paul longed to share this kind of testimony with the Jewish believers. “Whatever were gains to me I now consider loss for the sake of Christ.” Even though Paul may not have been teaching Jews to set aside the Mosaic law and its customs, (as he did teach the Gentiles), he had clearly left it all behind himself.

Paul loved these people who had so vilified and persecuted him. He wanted them to know Jesus as he knew him—as all in all, as his sufficiency and strength, as his one exclusive hope.

I wonder what a snapshot of my developing soul would look like? What about yours?

I wish I could take a selfie of my soul.

How might you go about getting a snapshot, a selfie if you will, of your soul? What’s going on in there?

© Seedbed 2021
Taking a Selfie of Your Soul
MORE STORIES