Then I Remembered What the Lord Had Said - Seedbed
close
Menu 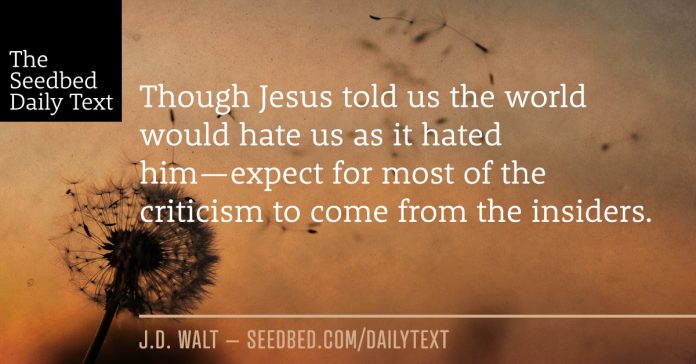 The apostles and the believers throughout Judea heard that the Gentiles also had received the word of God. So when Peter went up to Jerusalem, the circumcised believers criticized him and said, “You went into the house of uncircumcised men and ate with them.”Starting from the beginning, Peter told them the whole story: “I was in the city of Joppa praying, and in a trance I saw a vision. I saw something like a large sheet being let down from heaven by its four corners, and it came down to where I was. I looked into it and saw four-footed animals of the earth, wild beasts, reptiles and birds. Then I heard a voice telling me, ‘Get up, Peter. Kill and eat.’“I replied, ‘Surely not, Lord! Nothing impure or unclean has ever entered my mouth.’“The voice spoke from heaven a second time, ‘Do not call anything impure that God has made clean.’This happened three times, and then it was all pulled up to heaven again.“Right then three men who had been sent to me from Caesarea stopped at the house where I was staying. The Spirit told me to have no hesitation about going with them. These six brothers also went with me, and we entered the man’s house. He told us how he had seen an angel appear in his house and say, ‘Send to Joppa for Simon who is called Peter. He will bring you a message through which you and all your household will be saved.’“As I began to speak, the Holy Spirit came on them as he had come on us at the beginning. Then I remembered what the Lord had said: ‘John baptized with water, but you will be baptized with the Holy Spirit.’ So if God gave them the same gift he gave us who believed in the Lord Jesus Christ, who was I to think that I could stand in God’s way?”When they heard this, they had no further objections and praised God, saying, “So then, even to Gentiles God has granted repentance that leads to life.”

With such a long text for today’s reading I will keep the reflection short. I know you have a lot going on, and I highly value your time and commitment to join me here each day. Two observations, both from the bolded texts above.

Bottom Line: If you are going to get involved in the mission of God in the world, expect to be criticized. And though Jesus told us the world would hate us as it hated him—expect for most of the criticism to come from the insiders. Criticism is inevitable. Always remember: It was the insiders who killed Jesus. Love them anyway.

That’s the kind of thing I’d like to hear you and me say all the time, “Then I remembered what the Lord had said . . .”

Here’s an example of what I’m talking about:

As I read this passage today, then I remembered what the Lord said . . . “But the Advocate, the Holy Spirit, whom the Father will send in my name, will teach you all things and will remind you of everything I have said to you.” (John 14:26)

Boom goes the dynamite! That’s just what the Holy Spirit does isn’t it?! He reminds us of everything the Lord said. It’s like the Holy Spirit looks for those moments in our lives and at just the right time whispers, “That’s what He said!” Call me a master of the obvious, but we must have something somewhere in our memory, though, in order to be reminded of it. Need I say more on that?

May this glorious phrase become common in our every day parlance. “Then I remembered what the Lord had said . . . (insert what he said here)” Translation: This is the kind of storytelling the Body of Christ must recover.

Be watching for an opportunity today. Email me if it comes. I’d love to hear about it.

When is the last time you remembered (a.k.a. the Holy Spirit reminded you) something Jesus said? What was it?