The Battle for Our Whole Hearts - Seedbed
close
Menu 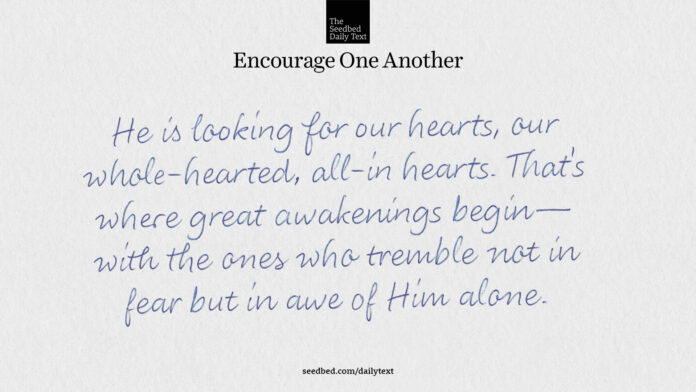 Early in the morning, Jerub-Baal (that is, Gideon) and all his men camped at the spring of Harod. The camp of Midian was north of them in the valley near the hill of Moreh. 2 The Lord said to Gideon, “You have too many men. I cannot deliver Midian into their hands, or Israel would boast against me, ‘My own strength has saved me.’ 3 Now announce to the army, ‘Anyone who trembles with fear may turn back and leave Mount Gilead.’” So twenty-two thousand men left, while ten thousand remained.

Finally sufficiently confident in God’s direction and favor, Gideon blew the trumpet, put out the call for freedom fighters and look what happened. 32,000 men reported for duty. Surely Gideon must have thought to himself, “Look what God did! Isn’t God amazing!” Or maybe he thought, “Well, that’s a good start against an army three times our size but not nearly enough!” Pay very close attention to what God says here:

“You have too many men. I cannot deliver Midian into their hands, or Israel would boast against me, ‘My own strength has saved me.’

“You have too many men. I cannot deliver Midian into their hands, or Israel would boast against me, ‘My own strength has saved me.’

Imagine God saying to you after your massive multi-year capital campaign, “You have too much money. Give 2/3 of it back.” And according to the story as it will unfold, we would only just be getting started.

This is why God chooses a kid with a slingshot and no armor to take on the giant Goliath. This is why God picks a teenage girl in a nowhere town to carry his Son to term. This is why he calls a super talented leader like Paul and teaches him all his qualifications are as worthless to God as doggy doo. Get a load of this:

This is why the Cross is foolishness to those who are perishing but to us who are being saved it is the power of God.

I think God would rather receive a dollar from a million poor people who couldn’t afford even that than to get a million dollars from a super wealthy person who would never even miss it. Why? Because God doesn’t need our power or our money or our talent. He wants our hearts. That’s the encouragement today. Give him your whole heart.

It’s why God’s first altar call of the morning was done in reverse:

Now announce to the army, ‘Anyone who trembles with fear may turn back and leave Mount Gilead.’” So twenty-two thousand men left, while ten thousand remained.

He is looking for our hearts, our whole-hearted, all-in hearts. That’s where great awakenings begin—with the ones who tremble not in fear but in awe of Him alone.

Father, I want you to have my heart. Yet I realize I need you to give me more access to my own heart that I might grant that access back to you. Open the eyes of my heart, Lord, to behold you, to fathom you, to be able to imagine just how good you are and loving and powerful and merciful and and and. . . Come Holy Spirit, awaken my heart to the pure unadulterated reality of you that my life might become an unfolding extravagant response to all that you are. In Jesus’ name, amen.

How are you trusting God in a real way these days? With no backup plan? Where in your life do you fail if God does not intervene?

I’m in Waco, Texas, today preaching at the First Methodist Church and with their staff on Monday and preaching at Truett Seminary on Tuesday on the campus of Baylor University. Please pray for a demonstration of the Spirit’s power in our midst. Thank you.

© Seedbed 2021
The Battle for Our Whole Hearts
MORE STORIES