The Biblical Journey of Peter to Pan - Seedbed
close
Menu

13 When Jesus came to the region of Caesarea Philippi, he asked his disciples, “Who do people say the Son of Man is?”

14 They replied, “Some say John the Baptist; others say Elijah; and still others, Jeremiah or one of the prophets.”

16 Simon Peter answered, “You are the Messiah, the Son of the living God.”

17 Jesus replied, “Blessed are you, Simon son of Jonah, for this was not revealed to you by flesh and blood, but by my Father in heaven. 18 And I tell you that you are Peter, and on this rock I will build my church, and the gates of Hades will not overcome it. 19 I will give you the keys of the kingdom of heaven; whatever you bind on earth will be bound in heaven, and whatever you loose on earth will be loosed in heaven.” 20 Then he ordered his disciples not to tell anyone that he was the Messiah.

I will always remember my visit to Caesarea Philippi. We got off the bus and began walking toward the site of this most famous occurrence when I noticed a curious sign. The sign said sasomething along the lines of “Welcome to Pan.” What? This was supposed to be Caesarea Philippi of Matthew 16 fame. I inquired only to learn that the place had been named Pan after the Greek god Paneas and served as a shrine of worship to this god. Panels, a half goat half human creature was the god of “desolate places” whom the Greeks believed could cause panic to their enemy in battle. Paneas was also a god of fertility and the shrine was a place where all sorts of perverted sexual acts would take place.

Our guide led us down a rocky path to a very cave like entrance into the side of a cliff. The opening to the cave from whence came a spring of water was known as the “gates of hell,” for ancients believed the god Baal would enter and exit the underworld from this location.

It gets better. Remember Philip the tetrarch. A few weeks back we identified him as a ruler of a fourth of the land. In other words he had a little fiefdom. Fourteen years after the death and resurrection of Jesus, Philip built a city there and named the place Caesarea Philippi in tribute to Caesar Augustus and to himself. A few decades later, after the death of Philip, King Agrippa II renamed the place Neronias Irenapolis, after the Emperor Nero. Seven years later Nero committed suicide and the city was renamed yet again. Fittingly, the word “pan” means “many.” Pan was a place of many gods. And a place of many gods, far from being a holy place, served as a den of paganism.

Jesus had taken his disciples some twenty-five miles well off the usual path to come to this place. Suffice it to say it was not an ancient holy land tour stop. Many Jews would have thought it anathema to go near it. Take the more prurient elements of Las Vegas and multiply it times ten and you get Pan.  Remember the very first commandment of the big ten? I’ll summarize it with three words: “No other gods.” Jesus, the master disciple maker, had set up an inescapable confrontation, a conflict of cosmic proportions, a location laden with layered significance, to ask the second most pressing question in the Kingdom:

When Jesus came to the region of Caesarea Philippi, he asked his disciples, “Who do people say the Son of Man is?”

And then he asked the most pressing question in the cosmos:

That’s where I want to leave it today. We will get to Peter’s answer tomorrow. For now, like a good tour guide who has given some information about the site, I want to let you walk around a bit and explore the place. In light of this informational content, I want you to ponder the transformational context of such a place. Why there? And can we be honest? Doesn’t there increasingly look like here where we live? What about that?

Lord Jesus, I feel as though I have learned and am coming to know a lot about you yet I know that is not enough. You want to reveal yourself to me such that my knowledge about you can be transformed into actually knowing you. Open my eyes to this place called Pan and help me grasp the sobering reality of the stakes of following you more truly. Come Holy Spirit and reveal to me the deeper realities of life in Jesus name, in which we pray. Amen. 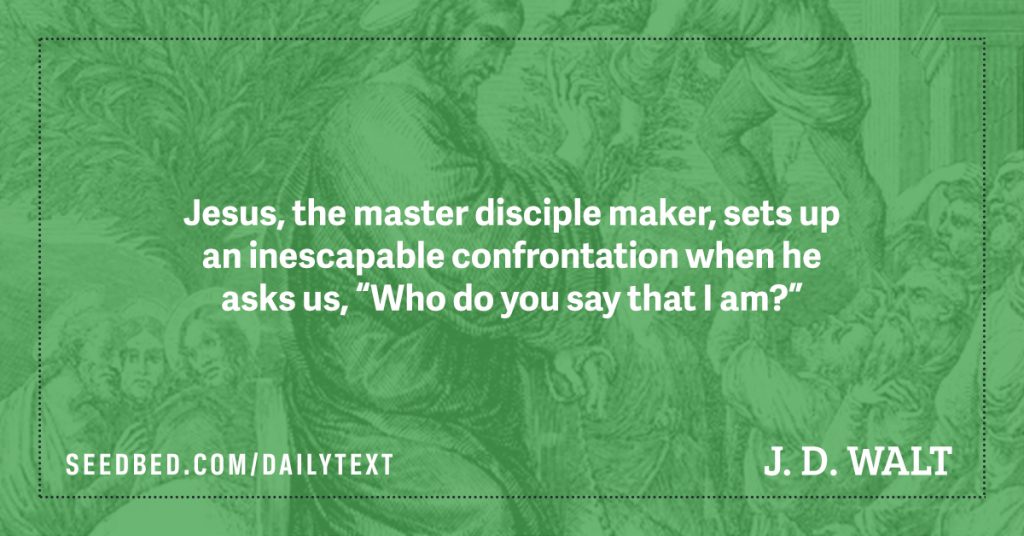 1. How are you understanding “Pan” as the gates of hell? How does that ancient place speak to our twenty-first century lives? Is it a mere metaphor? Or is it real?

2. Think through all the confusion in this place known as “Pan.” How does life in “Pan” break people, destroy lives, deceive and rob life? What are the implications of the church Jesus builds in a place like this?

3. Consider Jesus choice of location to talk about building his church and how he would build it. How do you see the church today following Jesus into the “Pan” of our times where he will build his church? What about those gates of hell?