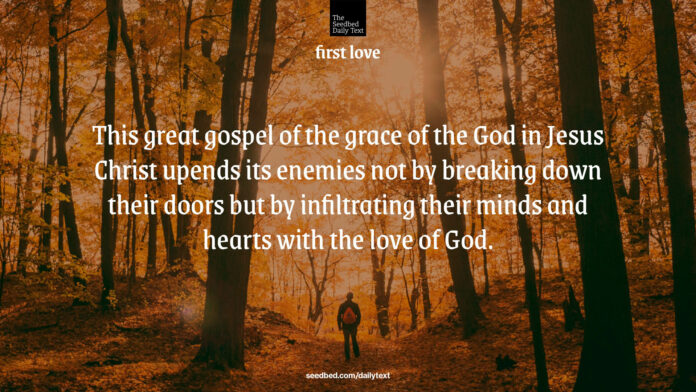 To our God and Father be glory for ever and ever. Amen.

Greet all God’s people in Christ Jesus. The brothers and sisters who are with me send greetings. All God’s people here send you greetings, especially those who belong to Caesar’s household.

Steve Jobs, the late founder and genius behind Apple and its remarkable run, patented a standard and yet always surprising way of closing out his keynote addresses. After giving updates on the stunning growth of the company, introducing a bevy of new products and software updates, and just when you thought it was all coming to a close, he would pause and with dramatic effect say, “But there is one more thing.” After all the wowing updates and impressive new products, he always somehow managed to save the best for last, and we always loved it.

Paul runs this play in his closing to the letter to the Philippians. In the midst of standard sorts of closing words of greetings, he slips in something of an atomic bomb. It would not have been lost on the Philippians. After the updates on Epaphroditus’s healing and his own soul’s flourishing under the worst conditions, after giving them nugget after nugget of gospel gold, he almost nonchalantly delivers his “one more thing.”

All God’s people here send you greetings, especially those who belong to Caesar’s household.

Hang on! Did Paul just say some of the villainous Emperor Nero’s staff had become followers of Jesus Messiah! Yep, that’s what he said. In the inner courts of the inner circle of the lordship of Caesar, there were brothers and sisters who staked their faith on the clarion creed, “Jesus is Lord!” Wow! Talk about palace intrigue.

Paul, the prisoner, making disciples of everyone from the peasant servants to the Praetorian Guard. Paul, citizen of Rome, hidden away in a Roman jail where he would be sidelined—a threat to no one but perhaps a forgotten cellmate—infiltrates the emperor’s household. How’s that for a well-played “one more thing”? This is not the persuasion of Paul but the power of the gospel. Talk about an apostolic, epistolary mic drop! This is it!

It reminds me of the story of Karol Wojtyla, a young Polish priest in the Roman Catholic Church in Krakow. In 1958 he served in a place called Nowa Huta, a new model Marxist city in Communist-occupied Poland. There was  no church there. It was not allowed. Year after year after year, on Christmas Eve, he would lead the faithful out to an open field where they would secretly yet publicly celebrate the Mass, staking the cross of Christ in the ground of this bastion of godless Communism. Despite the short life expectancy of a priest in those days and times, he never flinched.

Twenty years later, in one of the stunning surprises of church history, against every expectation and defying all odds, the Polish priest Karol Wojtyla would be elected as the first Polish Pope of the Roman Catholic Church. You know his papal name as Pope John Paul II. And just over a decade later, the Iron Curtain of Communism came crashing down.

This great gospel of the grace of God in Jesus Christ upends its enemies not by breaking down their doors but by infiltrating their minds and hearts with the love of God. There is no barrier that can ultimately withstand this gospel. On a certain unknown date in the future, either willingly or not, from Caesar’s household to Caesar himself,  every knee will bow and every tongue confess “that Jesus Christ is Lord, to the glory of God the Father” (Phil. 2:10-11)!

Abba Father, we thank you for your Son, Jesus, who overcomes through bowing down, who wins through losing, who is risen from the dead and who lives and reigns forevermore. So many speak of being on the right side of history. We want to be on the right side of the gospel. Come, Holy Spirit, and fill us with the mind of Christ and the very fullness of God. We pray in Jesus’ name, amen.

P.S. We close out Philippians this Saturday. I’d love it if you grabbed a book to commemorate the journey—maybe share one with a friend. See the link in the footer. My friend and fellow Farm Team Sower, Dan Wilt, is going to lead us in a series beginning on the Day of Pentecost called “Receive the Holy Spirit.” I can’t wait! I’ll tell you more about Dan soon.