The Difference Between a Kingdom and a Fiefdom - Seedbed
close
Menu

At that time Herod the tetrarch heard the reports about Jesus, 2 and he said to his attendants, “This is John the Baptist; he has risen from the dead! That is why miraculous powers are at work in him.”

3 Now Herod had arrested John and bound him and put him in prison because of Herodias, his brother Philip’s wife, 4 for John had been saying to him: “It is not lawful for you to have her.” 5 Herod wanted to kill John, but he was afraid of the people, because they considered John a prophet.

6 On Herod’s birthday the daughter of Herodias danced for the guests and pleased Herod so much 7 that he promised with an oath to give her whatever she asked. 8 Prompted by her mother, she said, “Give me here on a platter the head of John the Baptist.” 9 The king was distressed, but because of his oaths and his dinner guests, he ordered that her request be granted 10 and had John beheaded in the prison. 11 His head was brought in on a platter and given to the girl, who carried it to her mother. 12 John’s disciples came and took his body and buried it. Then they went and told Jesus.

Immediately following our lesson on the way and means of the Kingdom of God, on Earth as it is in Heaven, we find ourselves in conflict with another kingdom—the Kingdom of the World, also known in this case as the Kingdom of Herod. But let’s be clear. There is no monolithic Kingdom of the World. Ancient Israel gives us a good picture of how the Kingdom of the World works. Do you now what Tetrarch means? It means “Ruler of a fourth.” Israel was ruled by Rome and had been divided into fourths and assigned to four people. Because I don’t have time to articulate the complexities of it, let me put it like this. Take the state of New Jersey which is roughly about the size of Israel and divide it into four states with four governors and you get an idea of whats going on here.

In other words, the Kingdom of the World is not actually a Kingdom as much as it is a million fiefdoms in perennial conflict, constantly changing hands (or Herods). It ‘s Constantinople one day and Istanbul the next. (And as an aside, we are fools if we believe our United States is somehow immune from such machinations. “One nation, under God, indivisible, with liberty and justice for all,” has been a brilliant experiment but for it to work as envisioned requires a different kind of populace than the one we have devolved into.

So where am I going with all this and what does this have to do with Jesus, John the Baptist, Herod and his belly dancing daughter-in-law? Remember, this is a night and day contrast of kingdoms. In the red corner we have a king whose sexual indiscretions have landed him an an ungodly marriage. When John, the greatest Prophet in the history of prophets, confronted Herod with this inconvenient truth he was summarily arrested and imprisoned. Today’s text gives us a scene that feels like it came right out of the torrid script of Game of Thrones. Herod, the unapologetic scum that he was, has just enjoyed the equivalent of a strip-tease from his step-daughter and in his undoubtedly inebriated state offered her a blank check in exchange. Her wicked mother, Herodias, the co-defendent in John’s prosecution, promptly wrote in the amount blank of the check, “The head of John the Baptist” in the amount blank on the check.

In the midst of all this, I wanted us to notice the subtle contours of today’s text.

Herod wanted to kill John, but he was afraid of the people,

The king was distressed, but because of his oaths and his dinner guests, he ordered that her request be granted 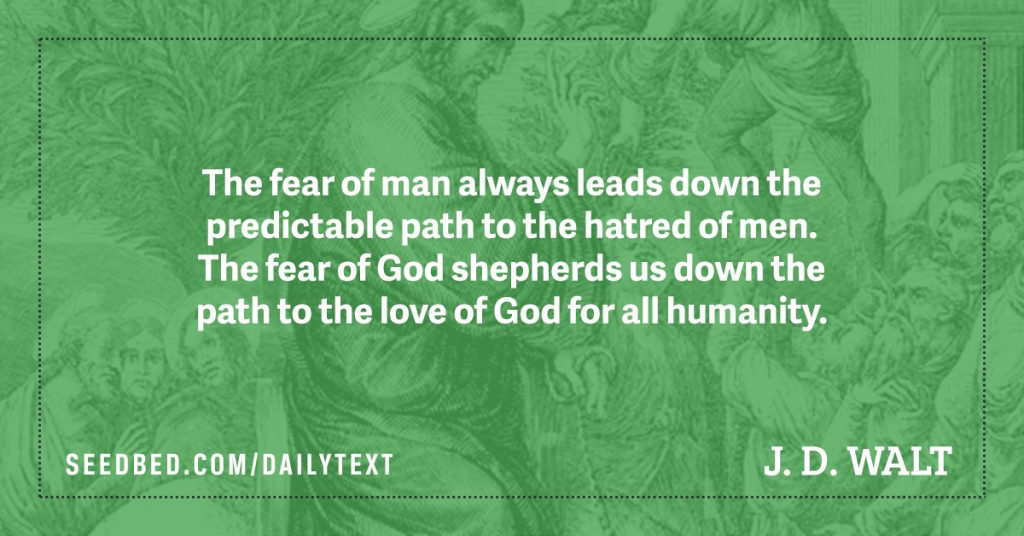 1. Why is it that often people in positions of power tend to be insecure?