The Difference between a Retreat and Retreating - Seedbed
close
Menu 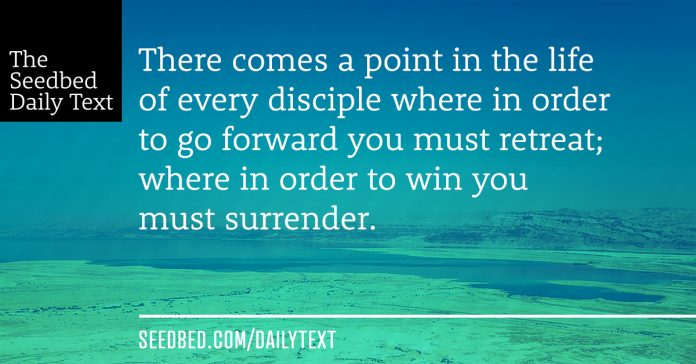 Again his Jewish opponents picked up stones to stone him, but Jesus said to them, “I have shown you many good works from the Father. For which of these do you stone me?”

“We are not stoning you for any good work,” they replied, “but for blasphemy, because you, a mere man, claim to be God.”

Jesus answered them, “Is it not written in your Law, ‘I have said you are “gods”’? If he called them ‘gods,’ to whom the word of God came—and Scripture cannot be set aside—what about the one whom the Father set apart as his very own and sent into the world? Why then do you accuse me of blasphemy because I said, ‘I am God’s Son’? Do not believe me unless I do the works of my Father. But if I do them, even though you do not believe me, believe the works, that you may know and understand that the Father is in me, and I in the Father.” Again they tried to seize him, but he escaped their grasp.

Then Jesus went back across the Jordan to the place where John had been baptizing in the early days. There he stayed, and many people came to him. They said, “Though John never performed a sign, all that John said about this man was true.” And in that place many believed in Jesus.

Then Jesus went back across the Jordan to the place where John had been baptizing in the early days. There he stayed,

He was now in full retreat. He went back to the Jordan River, where it all got started, where the prophetic voice cried out in the wilderness, “Prepare the way of the Lord.” Something tells me he longed for those earlier days, when life was simpler and the future flashed bright on the horizon. Even so, this place must have stirred enormous grief in him as he remembered John’s incredible beginning and tragic end.

It’s one thing to know you will ultimately win. That does not change the reality of experiencing real losses.

Here he was, the Son of God, the Word made Flesh, the Light of the World, the Bread of Life, the Good Shepherd, the Gate to the Kingdom, and at the same time the most despised and rejected man in the land. He’d healed the sick, driven out demons, and was on the eve of raising the dead. Still, they (and I should say we) wanted him dead. In exchange for his unwavering love, he received unmitigated hate. “He came to his own and his own received him not. But to all who did receive him he gave the right to become the children of God” (John 1:11-12).

And many were taking him up on the offer.

. . . and many people came to him. They said, “Though John never performed a sign, all that John said about this man was true.” And in that place many believed in Jesus.

All of this has me rethinking the whole idea of what “retreat” means. To date the word, “retreat” calls to mind the idea of going away for the weekend with a church group and doing spiritual things—sort of like a spa for the soul. The connection of the word “retreat” with the idea of running from a fight when you are losing occurs to me now. It’s the pathway to surrender. What if retreating were no longer thought of as an optional excursion? What if we began to see retreating as essential for our survival?

Abba Father, we thank you for your Son, Jesus, who though being God, retreats in the face of impending loss. Give us the grace to follow him in this unconventional way. Teach us that retreat is the pathway to surrender and surrender is the path to glory. We pray in Jesus’ name, amen.

1. Why do you think Jesus retreated to the Jordan River?

2. In a world that teaches us to never back down, how can we learn the way of retreating?