The Difference between Respectable and Respect - Seedbed
close
Menu 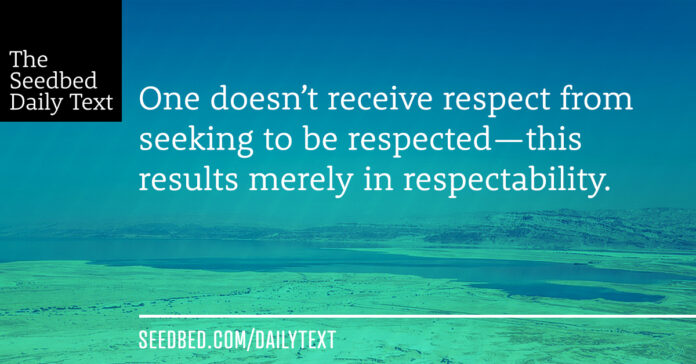 Later, Joseph of Arimathea asked Pilate for the body of Jesus. Now Joseph was a disciple of Jesus, but secretly because he feared the Jewish leaders. With Pilate’s permission, he came and took the body away. He was accompanied by Nicodemus, the man who earlier had visited Jesus at night. Nicodemus brought a mixture of myrrh and aloes, about seventy-five pounds. Taking Jesus’ body, the two of them wrapped it, with the spices, in strips of linen. This was in accordance with Jewish burial customs. At the place where Jesus was crucified, there was a garden, and in the garden a new tomb, in which no one had ever been laid. Because it was the Jewish day of Preparation and since the tomb was nearby,they laid Jesus there.

We don’t know a lot about Joseph of Arimathea, but we tend to like him. I wonder, though, would we like him if he hadn’t shown up at the cross and taken care of the body of Jesus?

Now Joseph was a disciple of Jesus, but secretly because he feared the Jewish leaders.

It’s interesting how living in fear of other people creates this condition. We conform to the expectations of others in order to maintain our respectability with them. We don’t respect them. We fear them. And the truth is, they don’t respect us either. Meanwhile, we live in the shared self-deception of respectability. One doesn’t receive respect from working to be respected. They get respectability.

Truth be told, we don’t really know too many Peter, James, and John characters. We know tons of Joseph and Nicodemus types. They run our towns, our local governments, and our civic organizations. They usher at church, teach Sunday school, and generally do what is expected of them. We are good, God-fearing, respectable people. Our respectability gives us access to both the chief priest and the chief justice. We are as at home in the chamber of commerce as we are in the church. And all of this can be quite good.

Let’s be clear. I’m not intending to indict 90 percent of the people who read the Daily Text. I’m just trying to get at a critical distinction between crowd-level churchmanship and courage-based discipleship. The difference is respectability versus real respect. We will never stop talking about Joseph of Arimathea and Nicodemus—not because of their high standing in the community, but because they stepped out of the shadows of their secret discipleship and comfortable reputations and did something courageous.

This was not a self-interested act of community service. They had no notion of any impending resurrection. Because they broke ranks with respectable religion and associated themselves with a crucified Messiah, they will live in the eternal respect of the risen Lord (and ours).

Abba Father, we thank you for your Son, Jesus, who walked into the world of respectable religion and called us to follow him into courageous discipleship. Awaken us to this opportunity and let us never look back. We pray in Jesus’ name, amen.

1. Why is respectability so seductive?

2. What is the difference between wearing one’s religion on one’s sleeve and being publicly associated with Jesus?

3. What do you think of this distinction between respectability and respect? What are we afraid of?

Today, and every Wednesday at noon central time, we gather on a global Zoom call to sow together for a great awakening in prayer. It is powerful. Would you join us today? ZOOM LINK HERE.

P.S. Will you join me for the Advent journey this year? It will be like none other– morning readings, weekly luncheons, advent candle lightings, even a sunrise service. COME ON! JOURNEY STARTS HERE.

© Seedbed 2021
The Difference between Respectable and Respect
MORE STORIES