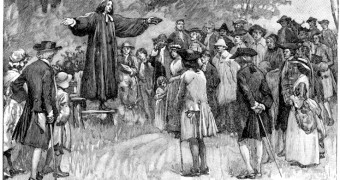 The class meeting was started in 1742 when a group of Methodists were trying to figure out how to pay off a building debt in Bristol, England. Captain Foy (who is otherwise unknown to historians) suggested that the Bristol society be divided up into groups of twelve people. One person in each group would be designated the leader and would be responsible for visiting everyone in the group every week in order to collect one penny from each of them. By this means, Foy believed the building debt could be retired. Someone raised a concern that this would prevent the poorest Methodists from being involved. Captain Foy responded by volunteering to take the eleven poorest members of the Bristol society into his group. He said that he would visit them each week and ask them if they could contribute. If they were unable, he would pay their pennies on their behalf. Then, he challenged the other people at the meeting to do the same thing.

As this plan was put into practice, it became apparent that many Methodists were not keeping the “General Rules,” which every Methodist was expected to keep. The General Rules were: do no harm, do good, and attend upon the ordinances of God. While the first two are fairly straightforward, “attend upon the ordinances of God” referred to basic Christian practices or disciplines. Wesley explicitly mentioned public worship, ministry of the Word, the Lord’s Supper, family and private prayer, searching the Scriptures, and fasting or abstinence (for more on this, see my Blueprint for Discipleship). Almost immediately, Wesley realized that the class leaders (the ones who had originally committed to make the weekly collection) were ideally situated to address the lack of discipline in keeping the General Rules among Methodists.

In the General Rules, Wesley described the duty of the class leader as follows:

That it may the more easily be discerned whether they are indeed working out their own salvation, each Society is divided into smaller companies, called Classes, according to their respective places of abode. There are about twelve persons in every class, one of whom is styled the Leader. It is his business:

(1.) To see each person in his class once a week at least; in order to receive what they are willing to give toward the relief of the poor; To inquire how their souls prosper; To advise, reprove, comfort, or exhort, as occasion may require.

(2.) To meet the Minister and the stewards of the Society once a week, in order: To pay in to the stewards what they have received of their several classes in the week preceding; To show their account of what each person has contributed; and To inform the Minister of any that are sick, or of any that walk disorderly and will not be reproved. (John Wesley, “General Rules,” in The Works of John Wesley, ed. Thomas Jackson)

Initially, the class leader met each person at his or her own house. However, it was quickly decided that it would be more practical for the entire class to meet together once a week. Wesley reported that at the class meeting, “advice or reproof was given as need required, quarrels made up, misunderstandings removed. And after an hour or two spent in this labour of love, they concluded with prayer and thanksgiving.” (John Wesley, “A Plain Account of People Called Methodists”) Wesley further reported on what he believed were the fruits of the class meeting: It can scarce be conceived what advantages have been reaped from this little prudential regulation. Many now happily experienced that Christian fellowship of which they had not so much as an idea before. They began to “bear one another’s burdens,” and “naturally” to “care for each other.” As they had daily a more intimate acquaintance with, so they had a more endeared affection for each other.

And “speaking the truth in love, they grew up into Him in all things which is the head, even Christ; from whom the whole body, fitly joined together, and compacted by that which every joint supplied, according to the effectual working in the measure of every part, increased unto the
edifying itself in love.” (John Wesley, “A Plain Account of People Called Methodists”)

The class meeting, then, quickly developed into much more than a capital campaign. It became a crucial tool for enabling Methodists to “watch over one another in love,” to support and encourage one another in their lives with God. In fact, John Wesley thought the oversight and support that the class meeting provided was so important that it became a requirement for membership in a Methodist society. To be a Methodist meant that you were involved in a weekly class meeting. So what happened in these weekly meetings? Classes were intended to have between seven and twelve members in them. Women and men often, though not always, met together in the same class. The groups were also led by both women and men. Classes were divided primarily by geographical location.

In other words, you would have attended a class meeting with the Methodists in your neighborhood. As far as the content or organization of the weekly meetings, the class meeting seems to have focused on three things. First, it held people accountable to keeping the General Rules. Second, the class meeting was a place where Methodists were encouraged to give weekly to the relief of the poor. Third, and most central to the time spent in the weekly meeting, it was a place where every Methodist answered the question, “How is it with your soul?” (Methodist historian Scott Kisker has recently rephrased this question as “How is your life with God?” See Elaine A. Heath and Scott T. Kisker, Longing for Spring: A New Vision for Wesleyan Community)

Did you notice what did not happen in the early Methodist class meeting? These groups were not Bible studies. People did not study a book in these meetings. Among the purposes or goals of the class meeting, Wesley did not list the transfer of information from a perceived expert to a largely passive and ignorant audience. In other words, the class meeting was a very different kind of small group than the typical Sunday school class. Rather than being focused on transferring information or ideas about Christianity, the early Methodist class meeting was focused on helping people come to know Jesus Christ and learn how to give every part of their lives to loving and serving Christ.

The phrase that best captures what the Methodists believed was so important about the class meeting was “watching over one another in love.” Early Methodists were asked to invite others into their lives and to be willing to enter deeply into the lives of other people so that together they would grow in grace. They were committed to the idea that the Christian life is a journey of growth in grace, or sanctification. And they believed that they needed one another in order to persevere on this journey. And so, in the early Methodist class meeting, people would gather together, someone would open the meeting with prayer, the group would often sing a song or two, and then the class leader would start by answering the question, “How does your soul prosper?” After participants answered the question, the leader would turn to someone else in the group and ask that individual the same question. The class leader or someone else might occasionally respond to the person’s answer by asking another question, offering encouragement, and sometimes giving advice.

The basic pattern of the meeting was that simple. People were essentially giving testimony to their experience of God over the past week. And God seems to have used this, as the testimony of others was frequently contagious. People often experienced conversion simply through participating in a class meeting! Wesley felt that the class meeting was so important that he believed that its decline would weaken Methodism itself. He wrote, “Never omit meeting your Class or Band; never absent yourself from any public meeting. These are the very sinews of our Society; and whatever weakens, or tends to weaken, our regard for these, or our exactness in attending them, strikes at the very root of our community.” The class meeting was one of two forms of small groups that held Methodism together, just as sinews connect muscle to bone, making it possible for arms and legs to move and function. In case this strong image was overlooked, Wesley continued by saying that if the class meeting was threatened, then the “very root” of Methodism itself was in danger.

Enjoy this entry? Get Kevin Watson’s, The Class Meeting: Reclaiming a Forgotten and Essential Small Group Experience from our store.