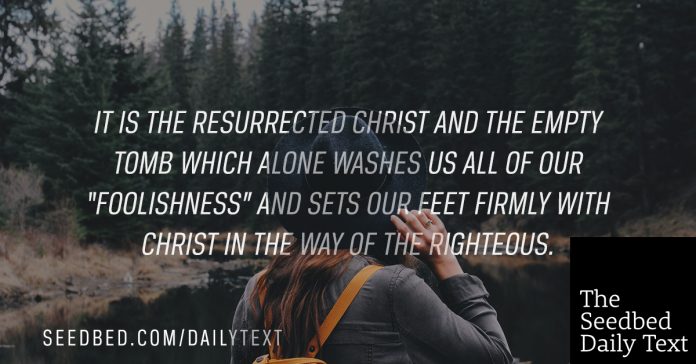 The fool says in his heart,
“There is no God.”
They are corrupt, their deeds are vile;
there is no one who does good.

The LORD looks down from heaven
on all mankind
to see if there are any who understand,
any who seek God.
All have turned away, all have become corrupt;
there is no one who does good,
not even one.

Do all these evildoers know nothing?

They devour my people as though eating bread;
they never call on the LORD.
But there they are, overwhelmed with dread,
for God is present in the company of the righteous.
You evildoers frustrate the plans of the poor,
but the LORD is their refuge.

Oh, that salvation for Israel would come out of Zion!
When the LORD restores his people,
let Jacob rejoice and Israel be glad!

Psalm 14 is the only psalm that appears twice in the psalter, as it appears in almost identical form in Psalm 53. The reason for this is not entirely certain, but we do know (as noted in the introduction) that the psalms were compiled into five separate books or collections, just as the law comes to us in five separate books (Genesis-Deuteronomy). This is why, as we noted in Psalm 1, the psalms are sometimes known as the Sung Torah. Thus, this psalm may have been used in separate books reflecting different liturgical purposes. Psalm 53 appears in the midst of a series of psalms reflecting David’s wilderness wanderings and betrayal at the hands of Saul’s men. Perhaps the final editors of the psalms, under the inspiration of the Holy Spirit, did not want to lose the message of this psalm as it sustained David in the midst of that particular dark period in his life.

It is in Psalm 14 that we first encounter the biblical definition of a fool. A fool is someone who says in his heart, “There is no God” (vs. 1). This psalm reminds us that, at its root, atheism is not merely an intellectual problem as is commonly thought in our day. Rather, the folly of atheism is rooted in a determined trajectory of autonomy that seeks to live life on our own terms and to resist the self-revelation of God’s presence and character in the world.

Atheism is, in short, not so much an intellectual choice, as it is a moral choice. In a larger sense, we are all biblical fools, even though we have not publicly aligned ourselves with the atheist. We are “fools” when we live and act as if there is no God. We live as functional atheists when we fail to seek God and to live righteously. But this psalm calls us back afresh to the company of the righteous and back to the great moral framework of the universe. Only in this company will salvation and joy be finally ours. It is the resurrected Christ and the empty tomb, which alone, washes us all of our “foolishness” and sets our feet firmly with Christ in the way of the righteous.