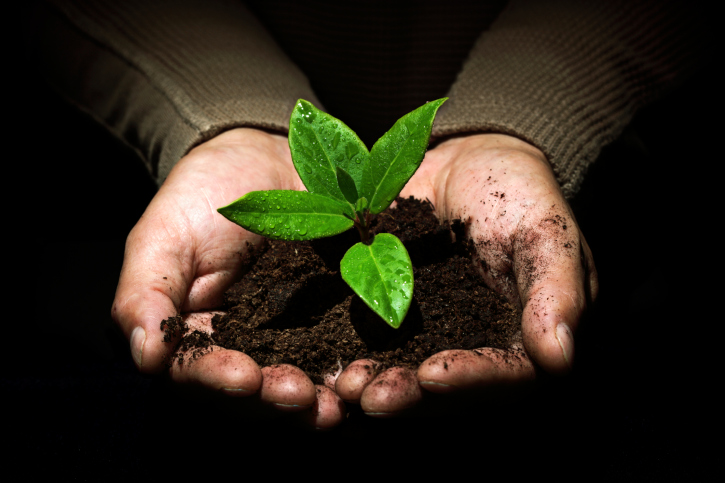 As Seedbed celebrates its first birthday I am reminded of our humble launch back on January 6, 2012, the Day of Epiphany. On that day, as a sign and symbol of our start, we gathered a small group and planted forty apple trees. Knowing of the challenge of growing a tree from a seed, we considered this gesture both humble and bold.

A week or so after the sowing ceremony, fragile sprouts began popping their heads out of the small pots. Some seemed to rush out of the ground only to soon topple over and wither. Others, for whatever reason, seemed to stall in their growth and eventually fall back to the soil. And to our disappointment, at least a third of the seeds never demonstrated any signs of life. ( And I should add that most of the pots had multiple seeds sown into them).

Then there was that one pot. Yes, it all came down to one tiny pot seeming to overflow with life. Five seeds sprouted from this soil. They flourished. Today, on the one year anniversary of Seedbed, we are pleased to have five trees, growing together in a close knit grove. They are small but established, fragile yet full of possibility.

Over the past year, as we watched the outcome of this sowing, epiphanies have abounded. Chief among them is how our sowing story mirrors the parable of the sower in Scripture. Though we don’t apply the following insight with scientific or statistical rigor, we do think we’re onto something the Spirit has sown into the soil of this text. Here follows what I’m calling, “The Four Laws of Extravagant Sowing.”

1. Three of every four seeds we sow will amount to nothing.  That’s a 75% fail rate.

2. Of those three, two will germinate and sprout up and seem to grow successfully for a while only to soon wither and die.

3. Only one of every four seeds will mature into a fruit bearing plant. That’s a 25% success rate, which looks like a failure…. until you do the math.

Consider the mathematics in the framework of money. Let’s say I gave you one million dollars. According to our rough formula, you will lose $250,000 right off the top. Within a short time, another $500,000 will disappear, leaving you with only 25% of the original gift, or $250,000. Feeling like a loser yet?

4. But that one seed will do something extraordinary. It will yield a return of 30, 60 or 90 times itself.

And so it is with the Kingdom of God. It only takes a seed to get this Kingdom going. Sow a million seeds. Reap fifteen million souls. Now that’s the kind of prosperity Gospel we could go for. When this begins to happen it won’t be long until we have a great awakening on our hands. It probably will not happen like we think it will or on our timetable, but we can be sure it will happen.

The Meaning of “Sow Extravagantly”

Approaching our calling in this fashion empowers us with a humble boldness. We can be humble because we know this kind of outcome does not come from our skillful sowing. In fact, the sloppier the better. Our aim is to get seed literally everywhere. This is not sowing with efficiency but sowing with extravagance. We can be bold because we are not charged with the outcome, only the obedience. The harvest belongs to God. In this way we can be humble without self deprecation and bold without grandiosity.

This is what we mean by Sowing Extravagantly for a Great Awakening.

As a wise African proverb says, “Anyone can tell you how many seeds are in an apple, but only God knows how many apples are in a seed.”