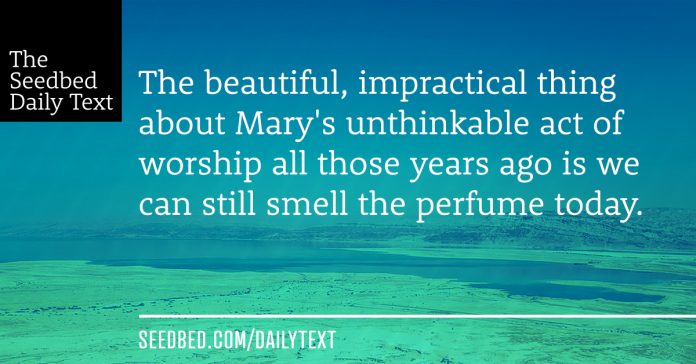 Six days before the Passover, Jesus came to Bethany, where Lazarus lived, whom Jesus had raised from the dead. Here a dinner was given in Jesus’ honor. Martha served, while Lazarus was among those reclining at the table with him. Then Mary took about a pint of pure nard, an expensive perfume; she poured it on Jesus’ feet and wiped his feet with her hair. And the house was filled with the fragrance of the perfume.

But one of his disciples, Judas Iscariot, who was later to betray him, objected, “Why wasn’t this perfume sold and the money given to the poor? It was worth a year’s wages.” He did not say this because he cared about the poor but because he was a thief; as keeper of the money bag, he used to help himself to what was put into it.

“Leave her alone,” Jesus replied. “It was intended that she should save this perfume for the day of my burial. You will always have the poor among you, but you will not always have me.”

Meanwhile a large crowd of Jews found out that Jesus was there and came, not only because of him but also to see Lazarus, whom he had raised from the dead. So the chief priests made plans to kill Lazarus as well, for on account of him many of the Jews were going over to Jesus and believing in him.

THE WORD OF THE LORD!

There’s so much that could be said about today’s text with Mary and the perfume. Think about the amount of money you made last year. Go to the bank and withdraw it in cash. Now go out into your backyard and make a fire. Is it burning? Take one bill at a time and throw this money into the fire as an act of sacrificial worship to Jesus–a burnt offering if you will. It’s not exactly analogous but you get the point.

That would be insane, wouldn’t it? I mean why wouldn’t you just give that money to people who needed it, right? Disingenuous or not, Judas did make a valid point even if only a pragmatic one. There’s a problem, though, with this kind of thinking. Worship is not practical.

Mary’s act of worship cannot live in a category anywhere remotely near to helping the poor. Mary was not pouring out her perfume. She was pouring out herself. This was neither calculated nor strategic. Mary was singing the song Isaac Watts would write almost two millennia later, “Were the whole realm of nature mine, that were an offering far too small. Love so amazing, so divine, demands my soul, my life, my all.”

Someone is sure to say, “But Jesus said as we did it unto the least of these we would be doing it to him. That makes helping the poor an act of worship to Jesus.” To that I would say, “That’s a good point. However, in this case, it misses the point entirely.”

One more point. There’s something to be said for doing extravagant things for the people we love while they are still alive.

“Leave her alone,” Jesus replied. “It was intended that she should save this perfume for the day of my burial.”

It seems to have pleased Jesus that Mary did this for him on that day rather than saving it until his burial. It’s probably not a legitimate take away from today’s text, but I think it is wisdom nonetheless—don’t wait to pour out love on people after they die. Do it now.

Finally, the beautiful, impractical thing about Mary’s unthinkable act of worship all those years ago is that we can still smell the perfume today.

Abba Father, we thank you for your Son, Jesus, who alone is worthy of our most extraordinary, extravagant, impractical, and even nonsensical acts of worship. Save us from our calculators when it comes to pouring out our gifts on him. Come, Holy Spirit, and lead us in the way of the cross, pouring out our whole lives for Jesus. We pray in his name, amen.

1. How did you react to the opening example of getting the equivalent of your income last year in cash and burning it as an offering to Jesus?

3. So where do you fall on the extravagantly wasteful versus practical giving continuum? Judas or Mary?