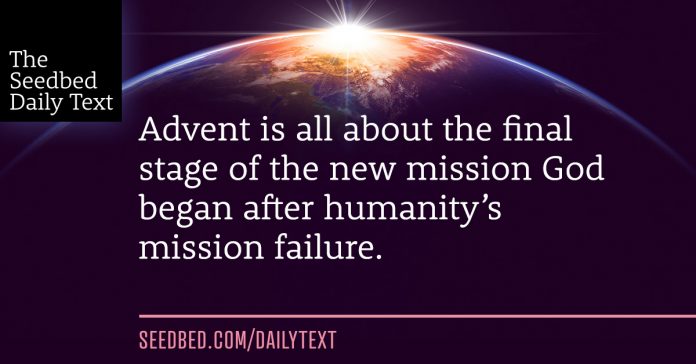 1 In the beginning God created the heavens and the earth. 2 The earth was formless and empty, and darkness covered the deep waters. And the Spirit of God was hovering over the surface of the waters.

3 Then God said, “Let there be light,” and there was light. 4 And God saw that the light was good. Then he separated the light from the darkness. 5 God called the light “day” and the darkness “night.”And evening passed and morning came, marking the first day.

9 Then God said, “Let the waters beneath the sky flow together into one place, so dry ground may appear.” And that is what happened. 10 God called the dry ground “land” and the waters “seas.” And God saw that it was good.

On Christmas Eve, 1968, the crew of Apollo 8 became the first humans to orbit the moon. That evening, during the most watched television event at the time, they sent back the first live images of the Earth. At the end of the broadcast the three astronauts took turns reading today’s text from Genesis, and ended with, “And from the crew of Apollo 8, we close with good night, good luck, a Merry Christmas—and God bless all of you, all of you on the good Earth.”

It was an appropriate text for the first glimpse of our planet from the heavens, and the image was aptly titled, “Earth-rise.”

But we know what happened next in the Genesis story: Mission failure.

God created humanity in his image, but we turned away in fear and rebellion, and all of creation still suffers. When we look at the world today, we see this isn’t the way it was supposed to be: Floods. Cancer. Mass shootings. Sexual assault. Terrorism. War. Hunger. Anxiety. Depression. And on an on.

But remember, in the beginning it was the good Earth, and that’s what Advent is about: the final stage of the new mission God began after humanity fell. We get that Jesus was born, crucified, and is risen… but we often loose sight that he’s also enthroned in heaven, interceding for the world, and will one day return to make all things new again.

Advent helps us see his mission and get in on it.

One of the Apollo 8 astronauts, Bill Anders, said they had prepared to explore the moon, but ended up discovering Earth. That’s what’s needed here: a new way to see the Earth. Theologically speaking, we need the “Google Earth” view if you will. In our day-to-day lives we spend most of our time on Google “Street View,” seeing only what’s right in front of us. Our day to day view tends to be more oriented by the darkness of the world around us than by God’s love for it.

Part of the reason we may not be ready for the return of Jesus is because we’ve not yet fully embraced the view of “for God so loved the world that he sent his only Son;” where Jesus is ahead of us, present now through the Holy Spirit, working out the restoration of the whole world.

10 For your unfailing love is as high as the heavens.
Your faithfulness reaches to the clouds.
11 Be exalted, O God, above the highest heavens.
May your glory shine over all the earth.

So then, Advent is a reorientation that refuses to only look at the street view, but is first pulling back to see all that God is doing to redeem all people’s stories into his great divine story through Jesus Christ. It gives us the opportunity to pause and take inventory… to start with the end in mind and see if our lives look like our beliefs and prayers… so that Jesus’s Kingdom can come on Earth as it is in Heaven.

Heavenly Father, you created us in your image—male and female—and breathed into us the breath of life. But we believed the big lie, became afraid, and turned away. And because of our rebellion, all of your creation has suffered. But you loved us so much that you sent your only Son into the world. By the power of your Holy Spirit, help us see the world as you do, and then engage their stories in love, so that we can see your Kingdom on Earth as it is in Heaven. In Jesus name. Amen.

1) When you look at the world, what is it that you see?
2) What primarily orients your day-to-day view? Is it the darkness in the world, or God’s love for the world?