The Gospel of John in a Sentence - Seedbed
close
Menu 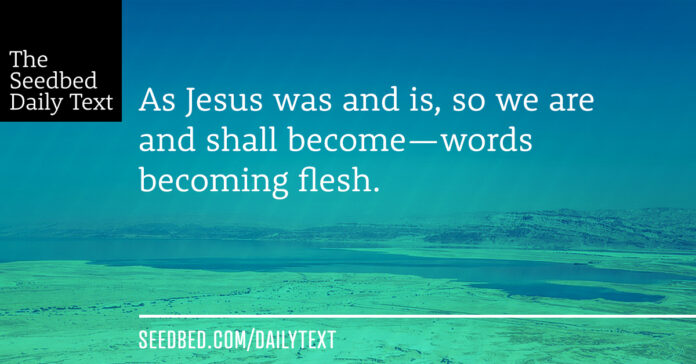 24 This is the disciple who testifies to these things and who wrote them down. We know that his testimony is true.

25 Jesus did many other things as well. If every one of them were written down, I suppose that even the whole world would not have room for the books that would be written.

Shallow enough for child’s play yet deep enough to drown an elephant. That’s where we began in our contemplation of the words that comprise the fourth Gospel.

Today we come to the end and we are still talking about words.

Jesus did many other things as well. If every one of them were written down, I suppose that even the whole world would not have room for the books that would be written.

Don’t hear me wrong. I do not meant to diminish John’s magisterial 21 chapters, 879 verses, and 15,635 words by suggesting they are mere words. And yet, if we are honest, that is what they are—words.

Then there are my words about John’s words. Just shy of one hundred thousand words through one hundred and eighteen entries; over seventeen weeks; spanning nearly four months. And of course, my words bear no comparison to John’s words, and apart from John’s words they have no meaning or even intrinsic worth. The point is to say that all these days, weeks, and months later we are still where we started—words.

The greatest peril of the whole project is that we somehow allow the Word to remain at the level of words. If you ask me to land on one verse in the whole Gospel—indeed the whole Bible—that held the greatest importance I think I could do it. I’ll take it a step further and narrow it down to one sentence. You are probably thinking I’m going to land on John 3:16. Nope. Here’s my choice:

The Word became flesh and made his dwelling among us. (John 1:14a)

This is the great point of God’s whole project. When the Bible says this:

As the rain and the snow
come down from heaven,
and do not return to it
without watering the earth
and making it bud and flourish,
so that it yields seed for the sower and bread for the eater,
11 so is my word that goes out from my mouth:
It will not return to me empty,
but will accomplish what I desire
and achieve the purpose for which I sent it. Isaiah 55:10-11

The Word became flesh and made his dwelling among us. John 1:14a

And I think you see where this is heading. As Jesus was and is, so we are and shall become—words becoming flesh. That’s why we are doing this every single day, Seed Nation, not to learn more words but so that the Word might become flesh in us—in me and in you. All that said, which is still just more words, the most challenging word from today’s text for me is this one:

Jesus did many other things as well.

We get the feeling John has only given us a sample. My kids were talking among themselves the other day about how they respond to people when asked about what their dad does for a living. One of them said, “I say, my dad writes devotions.” I found it mildly hilarious, and yet it kind of haunts me if I’m honest.

So here’s to the Word becoming flesh in our lives—to doing the Jesus stuff together.

Abba Father, we thank you for your Son, Jesus, who is forever and always the Word made flesh. Thank you that he makes his dwelling not only among us but within us. Thank you for John and his faithfulness to receive these revealed words and to write them down. Thank you especially for Jesus. Come Holy Spirit and cause the Word to become flesh in my life and in our lives together. We want to do the stuff Jesus did and does. Let it be said of us, “They did it!” We pray in Jesus’ name, amen.

1. So how is the Word becoming flesh in your life? Where are the developing edges of his work in and through your hours, days and weeks in this season?

2. How has this journey through John helped you to know Jesus better? To know yourself better?

3. What are your top take-aways from these past 118 days together in the Gospel?

P.S. PRE-ORDER BEHOLD THE MAN, THE DAILY TEXT JOHN SERIES HERE. 50% OFF FOR A LIMITED TIME.