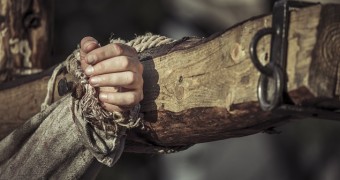 Jesus grieved. He cried out over Jerusalem. He mourned the spiritual blindness of His own people. He wept over a friend’s needless death. He bitterly opposed the casual attitude of comfort without care in the ministries of the temple. He grieved over people without direction, and He felt great compassion toward people oppressed by demons. His heart broke over hard-heartedness. Yes, Jesus grieved.

He was in the temple the day the priests were talking about Him and even plotting to kill Him. He was the one whom people whipped and tortured and cursed, people who never saw the other dimension of Him. He was there with Pilate the day he missed the fact he was in the presence of Truth Himself. Jesus said nothing, because He knew that unless a person’s heart is open, there’s really nothing to say.

This is the willing grief of our Father. It was His choice to be there when we did the things we are ashamed of and when we fell short of our best and outright failed. He was there. The name of God that speaks to this part of His nature is Immanuel—God with us. Immanuel doesn’t come to cleaned-up people. He was with Mary Magdalene when she still had those demons, not only watching but redeeming, reframing. Isaiah says He took up our pain and bore our suffering, was pierced for our transgressions and crushed for our iniquities.

By His wounds, we are healed. He willingly took on our limitations so He could understand our pain and be unafraid of it. He came to be with us as we walk through our worst, to grieve our limits and weaknesses with us so He can redeem even the worst suffering and make it into something beautiful.

Suffering is part of God’s heart. Our Father doesn’t shy away from our suffering but instead redeems it. He often uses it to shape character and mold hearts. God even uses our suffering to bring about our salvation. The fact is, God can redeem anything, even the worst that happens to us.

Consider your own life. What negative or difficult experiences have you had, of which you can now say, “But God!”—because of how He has used them in your life? Maybe you have a history of addiction, which you now use in your sobriety to encourage others? Maybe you have been through divorce and can pray for and counsel hope for those who struggle in their marriages.

What has the world meant for evil that God has turned to good in your life? In prayer ask, What are my wounds? In my people? My family? Myself? Then, using your journal, take some time now to name moments of redemptive suffering in your life. Consider how those wounds have healed, and how the Father has redeemed them. Use this as an opportunity to rest in the goodness and grace of our Father, thanking Him that nothing is beyond His redemptive power.

Enjoy this entry? Get Carolyn C. Moore’s book study and video, Encounter the Father in our store.