The "Insiders" and the "Outsiders" - Seedbed
close
Menu 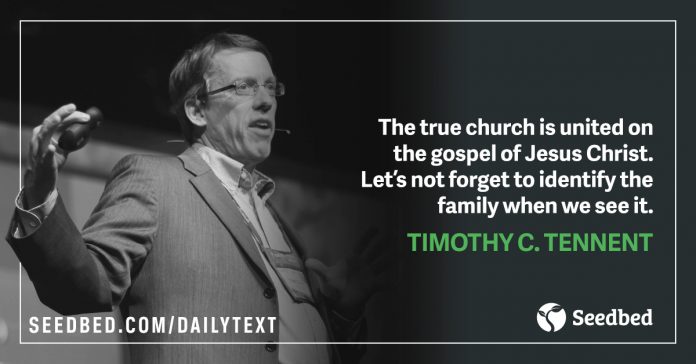 “Teacher,” said John, “we saw someone driving out demons in your name and we told him to stop, because he was not one of us.”

“Do not stop him,” Jesus said. “For no one who does a miracle in my name can in the next moment say anything bad about me, for whoever is not against us is for us. Truly I tell you, anyone who gives you a cup of water in my name because you belong to the Messiah will certainly not lose their reward.

Today, we read the account of when the disciples found a man driving out demons in the name of Jesus. The disciples told him to stop for the reason found in verse 38: “He was not one of us.” Oh, how familiar this is to us! The church has not even officially been started yet, and the disciples are already dividing and arguing. That parochial, partisan spirit is already raising its ugly head in the church. This is like the first denominational distinction. There is the church of those who actually personally knew Jesus and the church of those who didn’t personally know Jesus. We stopped them, because they were not “one of us.”

Brothers and sisters, never forget that you are first and foremost a Christian—a Jesus follower. That is what marks you out. Only secondarily are you a Methodist Christian, a Baptist, a Pentecostal or whatever other label which marks your church affiliation. We often struggle against sectarianism. This manifests itself in all the ways we do not feel a kinship with those who belong to the wider church, if they don’t belong to our particular group.

When I first went to northern India, there was, on average, only one church for every three thousand villages. That means that the chances of you being born in northern India in a city or village with a church in it was roughly one in three thousand. Christians in the north had precious little margins to squabble about the proper mode of baptism because they were surrounded by millions of Hindus. But, once the church began to take root in northern India, all the sectarianism which so often comes with it began to rise.

We must recapture Wesley’s catholic spirit. Wesley was, to use his words, as “fixed as the sun” on the great fundamentals of the gospel. Wesley was not even remotely inclined to embrace doctrinal deviations (what he called latitudinarianism). Wesley fiercely opposed those who would seek to destroy the gospel: “If anyone preaches a gospel other than the one you received, let him be accursed.” It is very typical today to hear people use Wesley’s call to a “catholic spirit” as a license to forfeit historic Christian orthodoxy. But, that is not what I am talking about in this meditation. I am referring to the importance of our embracing true Christians all over the world who love Jesus Christ and love His word, but may disagree with us on various points. We need to all be “catholic” Christians; not as in Roman Catholic, but “catholic” meaning “universal” Christians. We embrace fellow Christians wherever we find them!

1. Do you have good Christian friends who do not belong to the same denomination as you? Do you reach out to them?
2. Do you sense that you are able to discern the difference between being “fixed as the sun” on Christian doctrines and yet “open hearted” towards fellow Christians around the world?