Jesus denounced entire towns. Imagine that. It’s not something we think much about. Imagine if Jesus came to your town and denounced it and began pronouncing “woes” and impending doom. What if he compared your town with Sodom and you came out on the wrong end of the comparison; if there is a right end on that one? Note, he’s not addressing particular people or groups of people but entire towns. Jesus, the meek and mild Messiah is basically judging towns as fit for hell.

It harkens back to the epic negotiation between God and Abraham over the city of Sodom back in Genesis 18. God was preparing to destroy Sodom as a consequence of the wickedness and lack of repentance there. Abraham brought this pleading:

The Lord agreed. Then Abraham hedged down to saving the city if 45 righteous people could be found. This went all the way down to ten people. Ultimately they could not be found and the city was destroyed.

Maybe there’s a word tucked in here for the church today. What if ten righteous people in a city or town could make the difference? What if one Christian family in a neighborhood could make the difference for the whole neighborhood? What if our influence could spread like microscopically invisible leaven spreads through large amounts of flour with a profoundly inordinate impact? It’s so easy to think our small part will not be missed; that it doesn’t really matter. What if it could mean the difference between the town being sacked or spared?

Are you ready to start the negotiations? 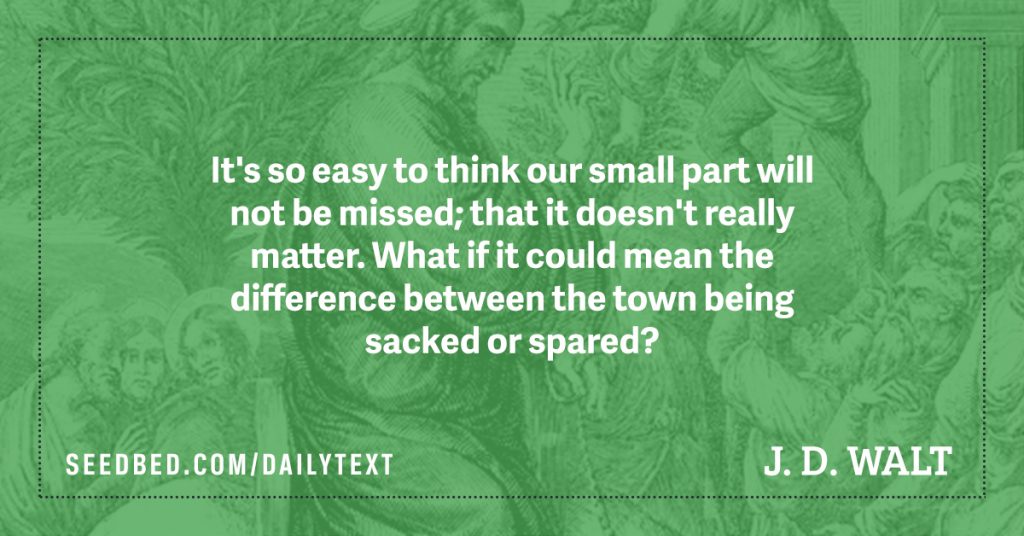 1. So what does repentance (realignment with the mission of Jesus and the Kingdom of God) look like for you today?

2. Have you ever considered that so much could be riding on your life and faith in Jesus?

3. What might it look like for you and your church community to take ownership of your town for the sake of the Gospel? How might that impact your ongoing prayer life and relationship with God. Ready to start the bidding? ;0)