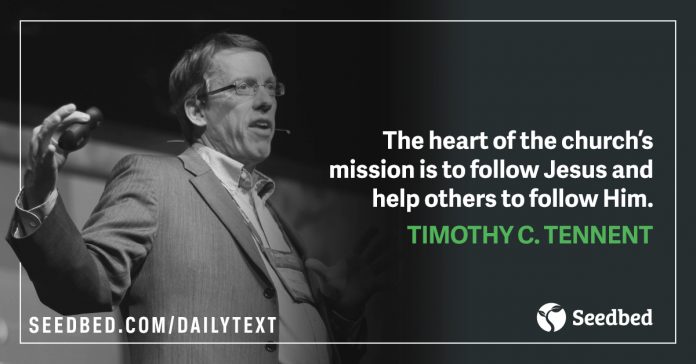 Then they came to Jericho. As Jesus and his disciples, together with a large crowd, were leaving the city, a blind man, Bartimaeus (which means “son of Timaeus”), was sitting by the roadside begging. When he heard that it was Jesus of Nazareth, he began to shout, “Jesus, Son of David, have mercy on me!”

Many rebuked him and told him to be quiet, but he shouted all the more, “Son of David, have mercy on me!”

Jesus stopped and said, “Call him.”

So they called to the blind man, “Cheer up! On your feet! He’s calling you.” Throwing his cloak aside, he jumped to his feet and came to Jesus.

“What do you want me to do for you?” Jesus asked him.

“Go,” said Jesus, “your faith has healed you.” Immediately he received his sight and followed Jesus along the road.

Our text opens in verse 46 with Jesus leaving Jericho with a large crowd following him. The momentum is building, and we are a long way from Galilee. This is the final day’s journey to Jerusalem, and the Passover Pilgrims are in full force, with a lot of buzz going on about this man named Jesus. Jesus desires urgently to get on to Jerusalem. The timing is crucial; the Passover is at hand. The climax of the gospel is in sight. So, it is a bit surprising that this account brings the whole entourage to a full stop. Jesus is stopped by a voice crying out, “Jesus, Son of David, have mercy on me! Jesus, Son of David, have mercy on me!” The call is coming from a blind man named Bartimaeus. There are three things I want you to take note of right here at the outset.

First, notice in verse 46, that he is named Bartimaeus. Do you realize that of all the miracles we have seen in Mark’s gospel—one after the other—this is the first one in which we are given the name of the person receiving the miracle? He is obviously personally known by the early church, or at least by Mark, testifying that this man becomes a disciple and follower of Jesus just as the last verse in the passage implies.

Second, note in verse 47, the title in Bartimaeus’ call: Jesus, Son of David. This is, of course, the premier messianic title, Son of David. You will recall that when Peter first declared, “You are the Messiah/Christ,” Jesus instructed them in chapter 8, verse 30 to not tell anyone. So, here for the first time, His messianic identity is being publically proclaimed. We are no longer in the secluded calm of the inner group of disciples at Caesarea Philippi. We are now in the throngs of pilgrims within a day’s walk of Jerusalem.

Third, notice in verse 48 how he is discouraged and rebuked for calling out to Jesus. This is one of the great themes found not only in Mark, but in all the gospels. We call it the Great Reversal. The first become last; the last become first. Remember the passage we have examined during the last two weeks on the Rich Young Ruler. That man went away sad because of the hidden idol of riches in his life. Contrast that with Bartimaeus, who is a social outcast. He doesn’t need to sell anything because he doesn’t have anything to sell. He’s a nobody in that world.

In verse 49, we finally meet with the words of Jesus. We have, up to this point, heard from everyone else except Jesus. Here Jesus speaks two words: “call him.” This is one of the great early precursors to the Great Commission. Call him. He’s the least; call him. He’s a despised outcast; call him. He’s blind, which means he’s probably under some kind of curse. Call him. Who are the peoples in this world whom everyone has forgotten? Who are deemed refuse? Who are outcasts? These are they who have never even heard the name of Jesus. The whole world wide mission of the church is present in seed form in those two words, “call him.” The whole world is looking the other way, and the church is mostly looking along the lines of the world. Brothers and sisters, we must hear the call of Jesus over the din of the world and remember what it is to be a missional church. Jesus heals Bartimaeus, but the power of this passage is found in the last line of the text in verse 52: “He followed Jesus along the road.” This is our call. Follow Jesus and help others to follow Him. This lies at the heart of the mission of the church for all time.

1. Can you think of people the church has forgotten and neglected? How can you be the voice of Jesus in calling them to follow Jesus as Lord and Savior?

2. Have you heard the call of Jesus in a fresh way in your own life? What does His call mean to you?