The Many Layered Mysteries of Miracles - Seedbed
close
Menu

29 Jesus left there and went along the Sea of Galilee. Then he went up on a mountainside and sat down. 30 Great crowds came to him, bringing the lame, the blind, the crippled, the mute and many others, and laid them at his feet; and he healed them. 31 The people were amazed when they saw the mute speaking, the crippled made well, the lame walking and the blind seeing. And they praised the God of Israel.

Why did Jesus do miracles? For the longest time I had a pretty simplistic black and white answer. I used to think Jesus performed miracles to prove he was God. I think different now. Now I’m coming to understand that miracles are many layered mysteries, opening up eternal windows into the unfathomable mercy of God.

Now I believe Jesus performed miracles because of his great compassion for the people made in his image. Jesus performed miracles to demonstrate that the great reversal of the Kingdom of on-Earth-as-it-is-in-Heaven was now present. The fruit of the fall of the human race littered the landscape. Jesus intentionally chose to go to the people who had been dismissed by the society as un-helpable. He chose the most broken scenarios as the places where he would demonstrate the break-through possibilities of his Kingdom. I am becoming convinced that the dearth of miracles in our day (at least where I live) is a direct consequence of the dearth of real love in our day. It’s not that we don’t believe enough. It’s that we don’t love enough.

I find the eternal window opened up by this miracle is becoming something of a mirror in which I can examine myself. This has me asking myself who I may have deemed “un-helpable” and given up on. Further I ask myself, “What would it mean for me, like them, to lay the people I have given up on “at his feet” as they did?” It must mean more than “saying a prayer,” though if I’m honest I have probably given up on that in many cases. Suffice it to say, I’m personally challenged here.

Summarizing—as I peer through this eternal window into the miraculous mercy of God, “seeing” more than before into those first century days of Kingdom come, the window turns into a mirror giving me the grace to see more into my own heart where I can become honest about the gap between who I am and who Jesus is calling me to become. The mirror gives way to a window again, only in the twenty-first century. Maybe I am gaining “eyes to see” the un-helpable ones in a new way—as people with possibilities and not as problems.

Finally, it occurs to me that I am looking at a two way window, one that has mirrors on both sides yet can also be seen through from both sides. Stretch with me to understand this. There’s a way of trying to help the un-helpable in which I see their form through the window but only as a needy person. When I try to help them in some token way the window becomes a mirror on their side in which they see themselves as the sum total of their needs. If I can somehow look through the eternal window of God’s mercy and “see” the person on the other side as an image bearer of God I will finally have the possibility of reaching to them in a way that opens the window for them to see God and in seeing God to be reminded of his possibilities for themselves as his image bearers.

I realize that last paragraph may feel like a hall of mirrors. I fear I may have wandered so deep into this mystery today that we may all be a bit disoriented. If so, I won’t apologize, because sometimes that’s just what we need. Sometimes it takes looking “at” something in a different way to bring us to a place of looking “in” to something in a different way. Ultimately, we want to come to the place where we move beyond looking at or into something and onto looking through it to behold God in a new way and so see the world in a true-er way. 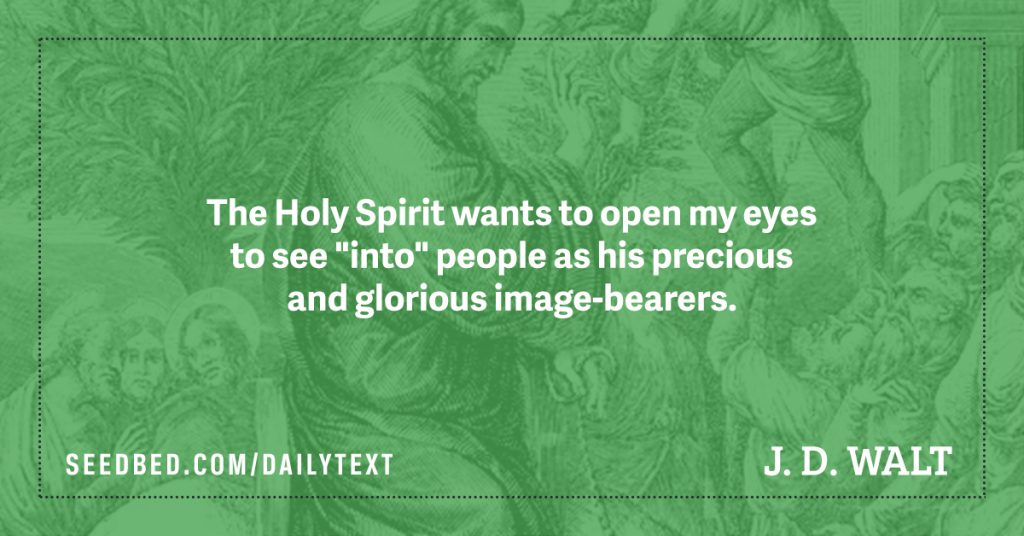 Merciful God, I confess that so often I look “at” people according to what they may need from me or what I may need from them. Come Holy Spirit and open my eyes to see “into” people as your precious and glorious image-bearers. And by a miracle of your mercy, open my heart to see “through” people and behold you in them. All of this for the glory of your name, Jesus, Amen.

1. Who are the people in your life you may have deemed “un-helpable?”

2. What if the problem is not in them as much as it is in the way you “see” them?

3. How might the disorientation of today’s reading lead to a fuller and richer orientation to the Love of God for people?