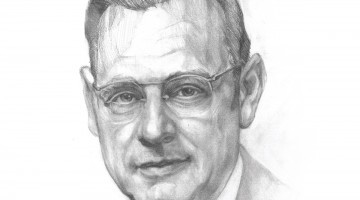 Harold John Ockenga may not be a household name today, but he was a key player in the mid-twentieth century neo-evangelical movement most famously personified by his friend Billy Graham. Ockenga was an instrumental force behind the founding of the National Association of Evangelicals (NAE), Fuller Theological Seminary, and Gordon-Conwell Theological Seminary—serving as the first president of all three—and he also had a hand in starting Christianity Today. For this and more, Ockenga rightly earned the nickname “Mr. Evangelical.” An admiring Graham called the longtime pastor of Boston’s historic Park Street Church “the evangelical intellectual leader, not only in New England but also in the United States.” Dr. Ockenga, who began his ministry in the Methodist Episcopal Church and hung a portrait of John Wesley over the desk in his home throughout his career, also stands as something of a “what if?” for the Wesleyan movement.

A young Harold John was born and raised in Chicago and his spiritual development owes much to his mother Angie Ockenga, whom biographer Garth Rosell compares to Susanna Wesley. At age 11, Ockenga traveled with his Sunday school class in 1916 to “an old-fashioned Methodist camp meeting” and there tearfully accepted salvation from his sins at the altar. In The Surprising Work of God: Harold John Ockenga, Billy Graham, and the Rebirth of Evangelicalism which serves as the primary source for this piece, Rosell provides the long list of activities into which Ockenga dove while a youth at Olivet Methodist Episcopal Church: “the class meeting, Sunday school, worship, the Junior Epworth League, a Bible study, and Young People’s Society.”

A few years later, another powerful encounter came among fellow Methodists under the guidance of a church youth worker. During a prayer meeting at a hotel where the group from Austin Methodist Episcopal Church was staying while attending a conference, a 17 year old Ockenga received a “second blessing,” feeling a firm assurance of salvation and covenanting to preach the gospel. After seeming to hedge his bets by keeping the decision secret for some time, he joyfully broke the news to the same influential figure, Alice Pfafman, who had encouraged him to go to the event in the first place and had subsequently had told Harold that she believed he was called to the ministry.

The Wesleyan path continued, also at the urging of Mrs. Pfafman, to Taylor University. There, “Ocky” fed his yearning desire to preach and honed his noted oratory skills by joining a school sponsored evangelistic team whose posters promised “A Full Gospel Fearlessly Declared.” Next up was seminary at Princeton, during which time Ockenga served his first pastorate, First Methodist of Avalon, New Jersey. His success there had several much larger Methodist churches wooing him to come their way upon his graduation.

The modernist-fundamentalist battles were in full swing while Ockenga was a seminarian and on these rocks his journey down the Methodist highway crashed to a halt. First, his ordination was in doubt. Before what would have been his final year at Princeton, Ockenga joined the conservative faculty and students that left to form Westminster Seminary in 1929. The move cost him the prestige of a Princeton degree and a European fellowship, but he was resolute in “taking a stand for Christ.” His Methodist conference did not see it so clearly, however. The first class of Westminster graduates faced strong liberal opposition before eventually being ordained a deacon by a bishop that Ockenga greatly admired. The bishop, however, would not override a district superintendent who steadfastly blocked multiple requests from churches with up to 600 members that the clearly gifted Ockenga take charge of their pulpit. The new seminary graduate was sent instead to “one of the hardest fields in the conference,” a deeply indebted Atlantic City church that had well under a hundred in the pews. There was some early progress, but Ockenga soon had in his lap a personal request from Frank Stevenson, Westminster’s chairman of the board. The seminary needed to fill an assistant pastor position at First Presbyterian, Pittsburgh, but as Stevenson noted in his correspondence, “You would have to become a Presbyterian.”

Ockenga had once written to a confidant of getting things “stirred up” in his Princeton Homiletics class by preaching “some good old Methodist doctrine to the Presbyterians. Ha! Ha!” During the midst of his struggles with the district superintendent, though, Ockenga had told the same friend that if he did not get assigned to one of the wooing congregations he would go to Europe to study and “when I come back I’ll be a Presbyterian.”

Despite his bluster, when denied his preferred Methodist positions, Ockenga first took it as “Providential” and returned to his New Jersey Methodist congregation, but when the Pittsburgh offer later came, he accepted. After just a year in the Steel City, it was on to a church of a thousand for six successful years before answering the call of Park Street at age 31. He would stay for 32 years and anchor a worldwide ministry before closing his professional life with a decade at the helm of Gordon-Conwell.

Of his decision to leave the denomination in which he had found salvation in Christ and his call to the ministry, Rosell surmises that “Ockenga had little quarrel with the theology of John Wesley but harbored a growing concern about the creeping modernism within the denomination and had some serious problems with its ecclesiastical polity.” By stepping away from his Wesleyan roots, Ockenga embarked on a career that likely would have not been possible within the bureaucratic confines of modern Methodism.

Ockenga the evangelical organizer tried to carve a path away from the separatism of contemporary fundamentalists, many of whom started as allies but later pilloried him for actions such as meeting with the Pope and cooperating with orthodox believers who, as he did, still maintained ties to mainline denominations. Given its eventual numeric triumph over both rigid fundamentalism and spineless liberalism, it is easy to forget that the early neo-evangelical trailblazers faced strong opposition along the way.

For example, Carl McIntire, a leading fundamentalist leader of the era who headed the American Council of Christian Churches (ACCC), was a seminary classmate and a close enough friend to have served in Ockenga’s wedding party. Years later, after a bizarre spat where McIntire thought the NAE, now seen by the ACCC as a rival, had invited faculty from his Faith Seminary to an academic conference, McIntire wrote to Ockenga noting two lovely book ends long present on his desk. Of these thank you gifts from the Ockenga nuptials, McIntire said, “They have been a constant reminder to me of you, and especially of our friendship. I am removing them now.”

Despite such private and public slights, Ockenga helped to build the institutional pillars of a new evangelicalism. These now hold up a movement that exists primarily outside denominational walls, but that was not always the plan. At the opening of Fuller Theological Seminary, Ockenga directly repudiated a “come-outist movement” that “brands all Denominations as apostate.” Their new seminary would be trans-denominational but was designed “to infuse evangelical conviction and life and to strengthen the church that is.” The hope was to re-infiltrate the once orthodox structures that the modernists had themselves successfully infiltrated and taken over.

Unfortunately, the neo-evangelical movement proved to be a victim of its own success. For many, the evangelical congregations, colleges, and parachurch organizations that were founded with the goal of re-infiltrating the broader institutions of religion, education, and public life have become too comfortable to leave. A subculture now suffices for a culture truly transformed.

What lessons, then, should Wesleyan evangelicals take from the story of Harold John Ockenga? On one hand, he is something of a forgotten feather in the cap.  Wesleyan influences are not always noted in the history of neo-evangelicalism, but here was a true giant of the movement whose most important and formative spiritual experiences all occurred within a Methodist framework. Yet, his greatest work for the Kingdom of God came outside of that structure. Ockenga thus also offers a cautionary tale about a politicized appointment system that, whatever its benefits, can potentially scare off or bury extraordinary leaders in the making. The rapid rise and long term stability that Ockenga benefited from in his ministry likely could not happen in the United Methodist system of today.

Finally, evangelicals who today have yet to “come out” of mainline denominations but instead are struggling to reinvigorate them often face a guilt-by-association that calls their own spiritual health into question: Can you even be a real Christian in that church? Such infiltrators should take heart, though. They are doing just what the original Mr. Evangelical had hoped they would do.