The Pain of Hosting a Party - Seedbed
close
Menu

Jesus spoke to them again in parables, saying: 2 “The kingdom of heaven is like a king who prepared a wedding banquet for his son. 3 He sent his servants to those who had been invited to the banquet to tell them to come, but they refused to come.

4 “Then he sent some more servants and said, ‘Tell those who have been invited that I have prepared my dinner: My oxen and fattened cattle have been butchered, and everything is ready. Come to the wedding banquet.’

5 “But they paid no attention and went off—one to his field, another to his business. 6 The rest seized his servants, mistreated them and killed them. 7 The king was enraged. He sent his army and destroyed those murderers and burned their city.

8 “Then he said to his servants, ‘The wedding banquet is ready, but those I invited did not deserve to come. 9 So go to the street corners and invite to the banquet anyone you find.’10 So the servants went out into the streets and gathered all the people they could find, the bad as well as the good, and the wedding hall was filled with guests.

11 “But when the king came in to see the guests, he noticed a man there who was not wearing wedding clothes. 12 He asked, ‘How did you get in here without wedding clothes, friend?’ The man was speechless.

13 “Then the king told the attendants, ‘Tie him hand and foot, and throw him outside, into the darkness, where there will be weeping and gnashing of teeth.’14 “For many are invited, but few are chosen.”

Anyone who has ever hosted anything of this significance (which is most people), knows what it feels like to be anxious over the question, “Will they come?” When we extend an invitation to join us for an important occasion we, in essence, are honoring those we invite. In doing that, we risk the vulnerability of our own honor. When we invite others to our party we risk the dishonor we might experience if they do not come. We invite and we then go to a lot of effort and expense to prepare for the party. Then there’s the RSVP. Why is it that invitees don’t give the courtesy of responding with their intentions? It is frustrating, but behind our frustration is felt dishonor. We are extending ourselves, going to great effort, trying our darnedest to bless others and they will not even RSVP. It’s maddening.

In today’s text we see such a scenario unfold. The invitations were sent. The guests had it on their calendars. They had RSVP’d. The event was on their calendars. Servants were sent out to remind them it was time. One by one, they start dropping like flies—one lame excuse after another—no-one was coming. This is another rejection parable, and rejection dishonors. The parable was designed to show the leaders of Israel what they had done.

It’s another massive surprise. The one’s invited to the wedding banquet of the King’s Son are no-shows so he invites another list. God’s chosen people refuse to respond. So God creates a new chosen people made up of whosoever will come. The gift of chosen-ness comes in the gift of the choice to anyone who will so choose to respond to the gracious invitation.

We get a glimpse at the stunning vulnerability of God. In sending his Son and inviting the world to receive him, God has opened himself up to the pain of our rejection. Anytime we invite another into our world we surrender our power to them. It’s why we don’t tend to do it. I don’t know about you, but what I tend to do is to invite and then preemptively reject in order to protect myself from the possibility of their rejection. If I reject them first then they can’t reject me, right? To truly invite means we preemptively embrace, regardless of the response. That’s what love looks like.

Father, thank you for giving us a look into your heart and the pain you bore and continue to bear from the way your only Son is rejected by those he came to save. You invite us into your Kingdom and we find so many excuses to pass on it. You prepare a celebration of unparalleled extravagance and somehow we find other more important obligations to attend to. Open our hearts to this reality in our lives, and make us into agents of your invitation. We open ourselves to experiencing the rejection you experience by becoming and embodying your invitation to the world. Help us with this. In Jesus name, Amen. 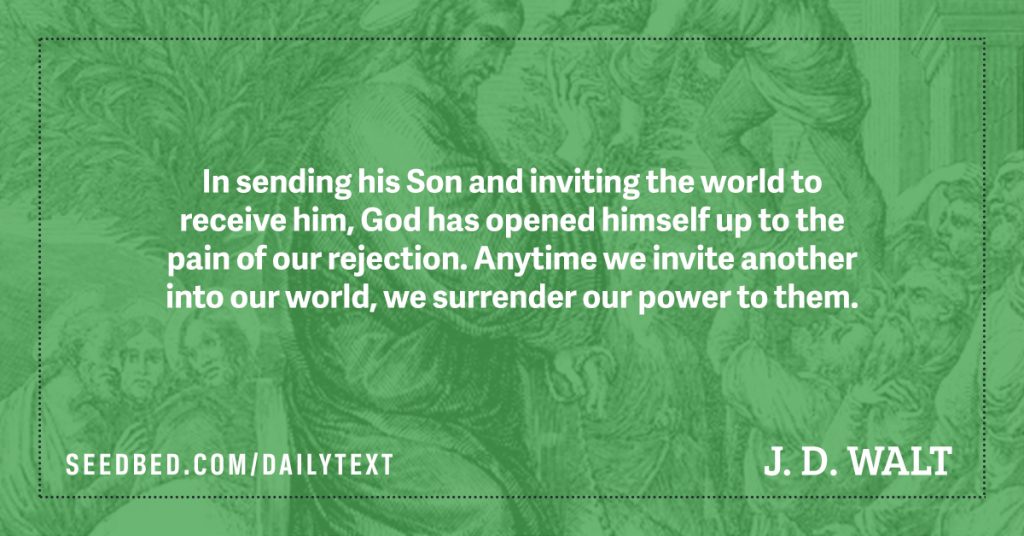 1.What are the range of emotions you feel when you extend an invitation and it is snubbed?

2. What might our Father feel from the flippant way his invitation to salvation is treated? What would it look like for us to share his vulnerability and heartache?

3. Are you a person who tends to preemptively reject others or preemptively accept them? What might change look like on that front in your life?

© Seedbed 2021
The Pain of Hosting a Party
MORE STORIES