The Power of a Well-Placed Comma - Seedbed
close
Menu 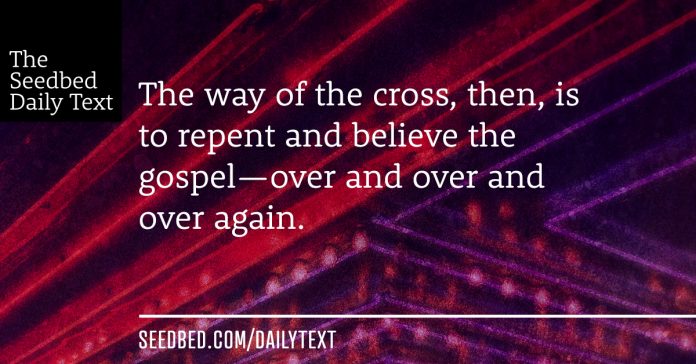 18 For the message of the cross is foolishness to those who are perishing, but to us who are being saved it is the power of God. 19 For it is written:

20 Where is the wise person? Where is the teacher of the law? Where is the philosopher of this age? Has not God made foolish the wisdom of the world? 21 For since in the wisdom of God the world through its wisdom did not know him, God was pleased through the foolishness of what was preached to save those who believe. 22 Jews demand signs and Greeks look for wisdom, 23 but we preach Christ crucified: a stumbling block to Jews and foolishness to Gentiles, 24 but to those whom God has called, both Jews and Greeks, Christ the power of God and the wisdom of God. 25 For the foolishness of God is wiser than human wisdom, and the weakness of God is stronger than human strength.

To those sanctified in Christ Jesus and called to be his holy people (i.e. “us”):

You know all too well the grammar joke about the panda who walks into a bar: He eats shoots and leaves. Now see how a well-placed comma completely changes the meaning: He eats, shoots, and leaves.

Where am I going with this? Thanks for asking. I remember years ago coming across an article written by Avery Cardinal Dulles in the esteemed journal, First Things. He recounted being in a church and seeing a banner with the following words:

God is other people.

He desperately wanted to get out a marker and place a comma after the word, “other,” such that it would read:

God is other, people.

We will do well to recall those words we rehearsed yesterday from the prophet Isaiah.

Until we can come to terms with this basic tenet we will have no hope of growing in the gospel. Today’s text further amplifies this theme:

God is other, people. Paul’s opening argument has everything to do with this comma. These Corinthian christians were drifting away from the true and living God and moving toward the seduction of putting people in the place of God. Their faith had less and less to do with God and more and more to do with people. They were all about the pride of the human race and its intelligence, philosophies, philosophers and teachers. It led to a situation antithetical to the gospel of Jesus Christ.

For the message of the cross is foolishness to those who are perishing, but to us who are being saved it is the power of God.

The confounding nature of the gospel is this: The God who is other became a person. This was and is pure foolishness in the eyes of the intelligentsia of every age. It is ridiculous, absurd and downright foolishness—that God would condescend to become an obscure Galilean peasant who would die the death of a heinous criminal and be resurrected from the dead?!

Paul is going to strip the gospel back to its pure essence; no adornments or flourishes: Christ crucified. The message of the Cross needs no help from people; only that they proclaim it. So what is the message of the Cross? It can be described in so many ways. We could track out the four spiritual laws or the Romans Road or powerful proof texts like God was in Christ reconciling the world to himself, not counting peoples’ sins against them. . . . all of which would be true and help us get at the truth, but how can we break it down into plain and simple language?

So what is the message of the Cross? From the Scriptures through the early church and the church fathers we see it expressed in a simplicity that is only exceeded by its profundity. It is this:

God is other, people. But because God became a person, people can become like God.

This is the message of the cross. The way of the cross, then, is to repent and believe the gospel—over and over and over again. The power of the cross is that human beings, created in the image of God and broken by sin, can be saved from the penalty of sin, delivered from the power of sin, restored from the effects of sin, infused with the life of God through the Person of the Holy Spirit and transformed from one degree of glory to the next. In short, people can actually become like God, who is Jesus. It all comes back to our core calling to become a distinctively amazing kind of person.

Father God, thank you for the cross. And thank you for the message of the cross. It is so confounding and so right all at once. I can hardly comprehend it and I suspect this is because it is revealed to the humble. I want to humble myself in your sight Lord. I ask you, by your Spirit, to reveal to my deepest mind and heart, the message of the cross. I renounce my foolishness. Count me in the number of those who are being saved. In Jesus’ name, Amen.

Wilderness: Global Pandemic Edition are starting to fly off the shelves (yes even before they exist). Secure your copy of this commemorative limited release edition today.

© Seedbed 2021
The Power of a Well-Placed Comma
MORE STORIES