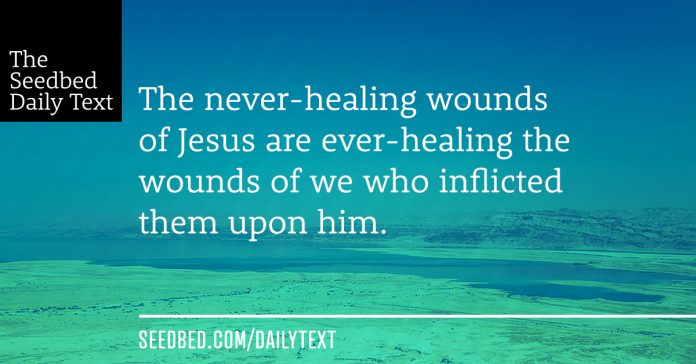 There was a man sent from God whose name was John. He came as a witness to testify concerning that light, so that through him all might believe. He himself was not the light; he came only as a witness to the light.

The true light that gives light to everyone was coming into the world. He was in the world, and though the world was made through him, the world did not recognize him. He came to that which was his own, but his own did not receive him. Yet to all who did receive him, to those who believed in his name, he gave the right to become children of God—children born not of natural descent, nor of human decision or a husband’s will, but born of God.

Surely these must be the saddest words in all of Scripture.

He was in the world, and though the world was made through him, the world did not recognize him. He came to that which was his own, but his own did not receive him.

To be at home and unrecognized is worse than being ignored.

To be at home and not be received is worse than rejection.

These are the wounds that never heal, for they are the deepest and most vexing wounds of the cross. The pain of crucifixion lasts but a day, but the suffering born of rejection lives eternally. The injury from nails and spears become scars. The wounds of rejection are forever open.

Herein lives the greatest mystery of the cross. These never-healing wounds of Jesus are ever healing the wounds of we who inflicted them upon him. Charles Wesley captured it with this turn of phrase, “Died he for me who caused his pain, for me who him to death pursued” (see “And Can It Be”).

The cross is not something that happens at the end of the gospel. The cross is the whole of the gospel from first to last. At the heart of all that ever has been and ever will be is a God who embraces those who reject him.

Yet to all who did receive him, to those who believed in his name, he gave the right to become children of God—

In fact, Jesus preemptively embraced us knowing that we would reject him. The power of the gospel is not that Jesus forgives our sin. It is that he decided to forgive our sin even before we sinned. If only we will receive it. He is the “Lamb slain from before the foundation of the world” (Rev. 13:8). And for all eternity, he is the slain one at the center of the throne of whom it will be sung for endless ages,

“Worthy is the Lamb, who was slain,
to receive power and wealth and wisdom and strength
and honor and glory and praise!” (Rev. 5:12)

Abba Father, forgive us for rejecting your Son and so rejecting you. We marvel at this unfathomable grace that in the face of our rejection you have embraced us anyway. Grant us the grace to receive your mercy and make us to be ambassadors of the same. We pray in Jesus’ name, amen.