55 Many women were there, watching from a distance. They had followed Jesus from Galilee to care for his needs. 56 Among them were Mary Magdalene, Mary the mother of James and Joseph, and the mother of Zebedee’s sons.
57 As evening approached, there came a rich man from Arimathea, named Joseph, who had himself become a disciple of Jesus. 58 Going to Pilate, he asked for Jesus’ body, and Pilate ordered that it be given to him. 59 Joseph took the body, wrapped it in a clean linen cloth, 60 and placed it in his own new tomb that he had cut out of the rock. He rolled a big stone in front of the entrance to the tomb and went away. 61 Mary Magdalene and the other Mary were sitting there opposite the tomb.

Many women were there. They had been there all along, every step of the way. As we search the horizon for “The Twelve” they are nowhere to be found, but Many women were there. This is not a battle of the genders point here and I would probably not raise it at all had so much of the church not relegated women to the background and back rooms of leadership in the church for so long. We will see in a couple of days that these women were also found fit to serve as the Apostles to the Disciples. SPOILER ALERT: The instructions given to the women by the angelic being: Then go quickly and tell his disciples: ‘He has risen from the dead and is going ahead of you into Galilee. 28:7.

They witnessed his suffering. They witnessed his death, and they would be the first witnesses to his resurrection. They had come to Jerusalem to do what they had been doing the whole way: to care for the needs of Jesus. Yes, the women were last at the Cross and first at the Tomb. Talk about shattering the highest glass ceiling—the last ones standing at the bloody cross and the first ones landing at the empty tomb. Where would we be without those women? For starters, would we even have a church? Certainly Jesus would have solved the dilemma; it’s just hard to see who those first witnesses would have been had it not been the women. Would he have had to dispatch the angels to Galilee?

So why, to this day, has it been so hard for so many women to rise above the ranks of childcare in our local churches. For starters, from a Kingdom of God perspective, teaching and caring for children is among the highest ranks of service. And to be sure, I’ve never heard much complaint from women about doing this work (or any other work for that matter). And none of this would be an issue at all had the church not reconstructed the low ceiling over womens’ work in the church.

Yes, I understand the assertion of biblical authority and the two rather pointed texts from Paul’s correspondence with the church at Corinth and with his young apprentice, Timothy.* It is unfortunate that conventional biblical scholarship has granted universal application to these very specific situations where Paul was working to solve very particular culturally bound problems. In the same way, centuries of bible scholars gave broad application to texts such as, “Slaves, obey your earthly masters with respect and fear, and with sincerity of heart, just as you would obey Christ.” (Ephesians 6:5)**

Bringing it back around: Many women were there. Take a look around your local church and you will see it’s still true. While you are at it, take a closer look and see what they are up to. Note where they are serving and where they seem to be precluded from serving. My point here is not about a woman’s right to do whatever they want to do wherever they want to do it (or a man’s for that matter). I’m just not sure individual rights are the best and highest framework for the Church. In my judgment, it comes back to the biblical concept of holy love, which at minimum means humility, respect, mutual submission, gifts, calling, the will of God, and the Kingdom of God.

More on Joseph of Arimathea tomorrow. ;0)

*For more on the issue of women in the New Testament check out our Seven Minute Seminary treatment from Dr. Ben Witherington III (part I & part II). Also check out New Testament scholar, Dr. Gary Hoag’s, take on the Timothy text. You can see the complete library of Seedbed’s resources here. For a riveting story on how one biblical scholar changed his position on these issues check out my new friend (and Daily Text Reader), Dr. Stan Gundry’s story, “From Bobbed Hair, Bossy Wives and Women Preachers to Women Be Free” here. (Stan is Sr. VP and Editor in Chief for Harper Collins: Zondervan.)

**Though beyond the scope of this post, it’s worthy of note that a number of modern biblical interpreters attempt to make the same “trajectory” case for the bible’s treatment of human sexuality. While it is a good faith effort, and one we must consider respectfully, it does not stand up to the rigorous requirements of the biblical trajectory test satisfied by slavery and women. For more on this consider Dr. Ben Witherington III’s treatment here.

Father, thank you that “many women were there.” Thank you for these courageous women, who probably weren’t thinking themselves courageous as they were just doing the next good thing courageous people do. We pray today for the women of your Church that you would all at once give them a tremendous sense of humble pride in the way they were “there” and for all the ways they are still there. And we pray particularly for the little girls and young women in our churches, that you would open their eyes to the limitless possibilities the have for service and leadership in the Church and in the Kingdom of God. Make us their champions, for Jesus’ sake and for all of our good. We pray in his name, Amen. 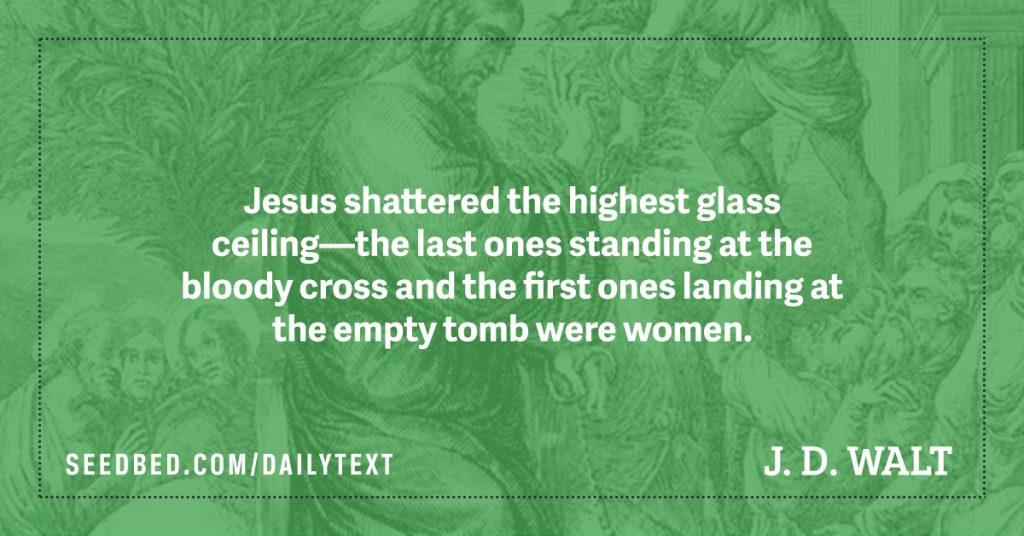 1. What would it mean for men to see women through the framework of, “She was there. I was not,” when it comes to raising the bar on respect?

2. Shouldn’t the church be leading the way in exemplifying the placement of women in all modes of servanthood and leadership according to their gifts, calling and the will of God?

3. How will you work to remove barriers for women to serve and lead in the church, the kingdom, and the world today? How will you champion our little girls and young women to soar in their God given giftings and callings?