24 When Pilate saw that he was getting nowhere, but that instead an uproar was starting, he took water and washed his hands in front of the crowd. “I am innocent of this man’s blood,” he said. “It is your responsibility!”

25 All the people answered, “His blood is on us and on our children!”

26 Then he released Barabbas to them. But he had Jesus flogged, and handed him over to be crucified.

Pilate made himself a surrogate of the people. He said to the crowd, in essence, “Your will be done.” He denied any personal responsibility in the matter. He literally washed his hands of responsibility. “I am innocent of this man’s blood,” he said. “It is your responsibility!”

On the other hand, look who willingly took responsibility—the crowd—who has no capacity for personal responsibility. All the people answered, “His blood is on us and on our children!”

The irony is thick. The one who has the power to release Jesus and the clear duty, delegates justice to the angry crowd. Barabbas, the convicted criminal, gets a pardon while the innocent accused gets the death penalty.

None of them knew his death would atone for their sins, yet it was already happening. Pontius Pilate, in attempting to deny responsibility would be forever named as the responsible party under whom Jesus suffered. Still the blood of Jesus would atone for the blood stains Pilate could never get off his hands. The crowd who said his blood would be on their heads and their children had no notion of the unfathomable truth of their statement. His blood would be on them and their children,  not as a curse, but for their atonement, if only they would receive it. Barabbas, who sat in prison awaiting his own death would be set free because the Son of God was imprisoned. He would live because Jesus died.

The layers of this ancient plot are all at once completely logical and totally incomprehensible. And all of this without Jesus saying two words. And the crazy part is no-one had any idea of any of this at the time it was happening.

Notice too, not one of his twelve disciples are anywhere to be found. You will find them on practically every page of Matthew’s Gospel, but in these final pages they are decidedly AWOL. That’s the problem with us disciples. We think we are all in until something shows us we aren’t really in at all.

So what of us? It’s so easy to pull back, fade into inattentiveness and think we’ve seen all this before—that we get it. If we have any hope of becoming humble, we must more deeply behold his humiliation on our behalf. It’s time to wake ourselves up. We cannot be distant observers. We must become eye witnesses. We can go there … if we will.

Where are we? That’s the question.

Father, I come to this scene and those to come as though they are somehow familiar to me. It’s a sign that I don’t really understand them at all. I’m asking you to awaken me to the suffering humiliation of the Son of God that I might learn to humble myself in a whole new way. I’m asking you to reveal to me the meaning of atonement in a way my rational mind could never grasp. I want to walk this last mile with Jesus as though I have never walked it before, because the truth is, I’m not sure I really have. I release all my assumptions and renounce all presumption. I present myself to you afresh, in Jesus name. Amen. 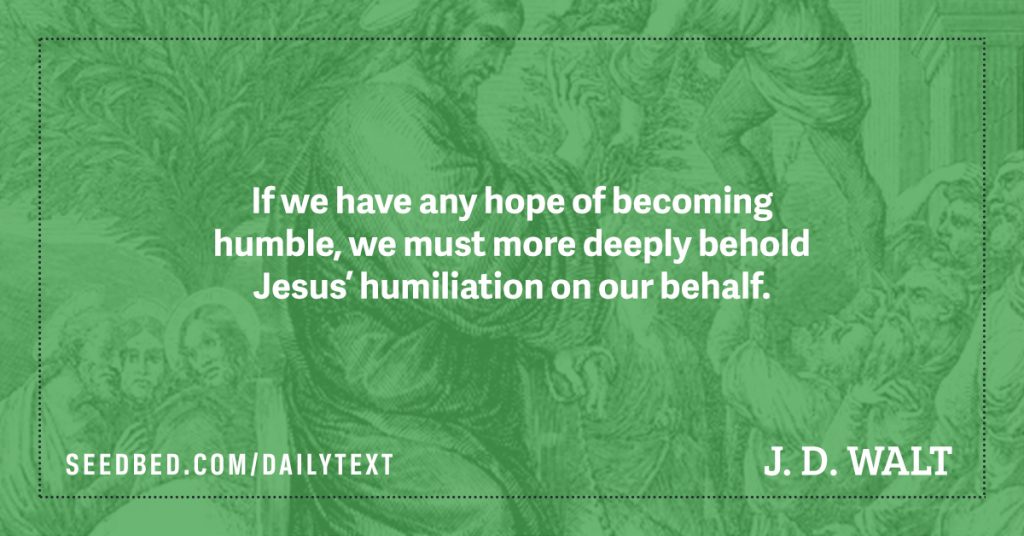 1. How can you wake yourself up from the sleep of familiarity? It’s impossible to see anything new if we think we’ve already seen it all.

2. What do you think of the incredible irony at work in today’s text?

3. What do you think it would have been like to be Barabbas?