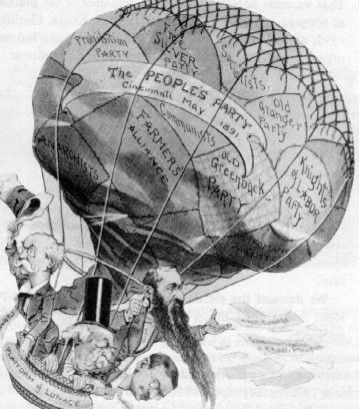 Let’s ponder the promise and peril of populism. Or maybe the triumph and terror of populism.

Follow the news for a random hour, and you’ll probably hear the words populism and populist. “Populist revolt.” “populist anger.” Populist challenges to “elites.” Anger toward “the establishment” or “those in power,” and so forth.

We hear of “a rising tide of populism” in Europe and the United States; political and social revolution. Case in point: a December 10 article in The Economist referenced Italy’s “populist Five Star Movement” and spoke of “yet another eruption of populism, after the Brexit vote and the election of Donald Trump.”

(Caution: When you hear such talk, consider the instructive exception of Canada. More on that later.)

As most often used in the media, populism is bad. It equals chaos, anti-intellectualism, head-in-the-sand ignorance, unreasoned passion, and often extreme nationalism, xenophobia, nativism (defined below), or other nasty things.
Is Donald Trump riding a populist revolt?

Words like populist and elites are media shorthand that obscure rather than clarify. Each generation produces a fresh crop of such misleading labels that polarize rather than inform.

Demagogues feast on such labels, turning them into fear-stoking propaganda. Wise and just leaders find ways to cut through the jargon and force people to think, to reconsider, to question themselves and the roots of their fears. This is much more difficult than appealing to anxiety and prejudice. And often quite unpopular.

In U.S. history, no one understood this or practiced wise leadership better than Abraham Lincoln, who resisted bad populism. That’s why today most Americans and historians reckon Lincoln our greatest President. But that is now; at the time Lincoln paid the ultimate price.

My point: the bastardization of the term and concept populism is wrong. If the United States, Western Europe, the Middle East, the Philippines, Korea (North and South), China, Central Africa, and other regions need anything, it is genuine populism!

The recent historic peace deal brokered in Colombia (a ray of sunlight through the clouds) is a great triumph of populism, because it puts the people first.

What Really is Populism?

Yes, today populism is mostly viewed negatively, linked with extremism, anti-intellectualism, nativism, even racism and anti-Semitism. Nativism, as a political term, means “the policy of protecting the interests of native-born or established inhabitants against those of immigrants.” The term can been used in other ways, but I use it here in this political sense.

So, is populism always bad? Well, people movements are only as good or bad as their ideals and goals, the character of their leaders, and the actions they promote or endorse. Both the gospel and U.S. democracy claim to be for the people—that is, all the people. Yet church and state often favor special interests and powerful people over “the general welfare” (Preamble, U.S. Constitution).

The essence of populism is that the people (all the people, fairly represented, and especially the common people, including the oppressed and marginalized) should control the government. The test of faithful, legitimate government is the people’s general welfare.

I deal with populism in my book Populist Saints: B. T. and Ellen Roberts and the First Free Methodists (Eerdmans, 2006). Especially in my case study of B. T. Roberts, the Farmers’ Alliance, and the rise of the People’s Party.

The secretary of the Texas Colored Farmers’ Alliance captured the essence of populism in 1890. The Farmers’ Alliance, he wrote, was “peculiarly a movement of the people, by the people and for the people.” This is nothing more than the ideal enshrined in America’s founding documents. Yet by the 1870s and 1880s, it sounded radical, even subversive!

The Farmers’ Alliance was a reform movement B. T. Roberts strategically helped birth. For this and other reasons, I argue in Populist Saints that Roberts was a true populist. The story of B. T. and Ellen Roberts is a case study in populist passion for all the people, not neglecting the poor. This passion blended the radical Jesus “for the poor” gospel with the radical ideals enshrined in the U.S. Constitution.

Clearly, there is good and bad populism. Today, both are loose in the land. By a razor-thin margin, one edged out the other in the recent U.S. Presidential election.

The Peril of Populism

The peril of populism is that it awakens people’s worst anxieties and fears, surfacing submerged prejudices. The issues raised may themselves be valid. But the appeal (often intentional) to prejudice and fear numbs the conscience; silences “the better angels of our nature” (Lincoln’s phrase).

This searing of the political conscience then lowers public resistance to unjust or repressive steps by the government. People may be a bit uneasy—they may question, privately—but they don’t get alarmed till walls begin closing in upon them.

Today the greatest threat to the United States is not terrorism. It is fascism in reaction to terrorism. Fearing chaos, people acquiesce to repressive steps against scapegoats—the other, the alien—until repression finally reaches them. Too late.

What is fascism? Extreme nationalism grounded in an acceptance of unquestioned authority. Fascism restricts civil rights. It fundamentally opposes democracy. Fascist governments are headed by authoritarian leaders who forcibly suppress criticism and opposition while invoking nationalism and ethnocentrism or racism. Italian Fascism under Mussolini is the prototype.

What is demagoguery? An appeal to people that plays on their emotions and prejudices rather than to reasoned thoughtfulness and informed discourse. It is a slogan-based manipulative approach feeding people’s worst instincts and numbing the concern for truth and verifiable information.

What is ideology? A system of ideas, beliefs, or theories that answers basic worldview questions, is accepted by faith, and discourages reflective analysis or open-minded consideration of other views. Ideologies often elicit a depth of conviction akin to religious faith. Communism, socialism, libertarianism, and capitalism (for example) are often called ideologies.

Ideology numbs the conscience and hardens the heart. Some versions of Christianity function as ideologies in the sense that, functionally, adherents’ allegiance is more to the system’s doctrines than it is to Jesus and his life and teachings.

The peril of populism is found here, in demagoguery and ideology. When populism turns bad and becomes nationalistic, xenophobic, nativistic, it imperils freedom and the acceptance of diversity.

How can bad populism possibly appeal to devout Jesus followers? By (1) arousing self-protective fear and (2) building an impenetrable wall between personal ethics and social/political ethics.

I know sincere, devout, loving Christians who show kindness, compassion, thoughtfulness, and hospitality in personal relationships and in their understanding of personal Christian witness—but not in politics! So rather than being advocates for and defenders of the poor, Christians unwittingly become oppressors through public policy. Personal compassion, but not policy compassion. Yet in the Bible, a key test of righteous government is defending the cause of the poor, rescuing the needy, welcoming the alien, and crushing the oppressor (for example, Psalm 72:4).

In the United States, the disease of bad populism has surfaced off and on in the past. Today it is on. Oppressive government is the potential terror of populism. If Christians are not immune, who will be?

The Promise of Populism

But there’s another side: the promise of populism. This we see in B. T. Roberts and in many progressive movements throughout history. Classic examples are abolitionism and women’s rights activism. Reforms that produced pure food and drug laws, workable labor conditions, greater transportation safety, environmental protection, safeguards against diseases, and limitations on business monopolies were all the fruit of populist impulses.

There’s a huge literature on this. One place to start is Tim Stafford, Shaking the System: What I Learned from the Great American Reform Movements (IVP, 2007). However the positive populist dynamic has been at work globally throughout history in varying contexts.

The promise of populism is that it can indeed arouse “the better angels of our nature.” It can birth social and thus political momentum for reforms that move a nation in the direction of really embodying its best ideals. In the case of the U.S., those are the ideals of the American Revolution. But not just political ideals. To a more limited degree, the very hope of the biblical kingdom of God.

It was just such populism that put Barack and Michelle Obama in the White House. It was the cultural, economic, political, and racist headwinds President Obama faced that undermined the populist appeal and welcomed its opposite.

One can easily sketch worst-case and best-case scenarios for the future, depending largely on where populism goes. To do this fully would require another blog. But in sum:

Best-Case Scenario. The new Administration succeeds in getting a major infrastructure reform bill through Congress with bipartisan support. This boosts the economy, increasing jobs and wages across the board. Meanwhile moderate Republicans in the U.S. Senate, such as Susan Collins and John McCain, working with sympathetic colleagues in both Houses, limit the worst initiatives of bad populism. Leaders such as Senators Bernie Sanders and Elizabeth Warren, with likeminded folk outside government, catalyze a broad-based “better angels” populist movement that shifts the balance of power in 2018. Growing grassroots activism by young folks across the nation increases the appeal. U.S. citizens take note of the positive impact of Canadian populism since 2015.

Through a series of political compromises, comprehensive universal healthcare is enacted. Environmental stewardship becomes a true national priority. Immigration laws are reformed; the U.S. learns to both welcome and integrate immigrants and refugees across a broad cultural and religious spectrum, beginning to catch up with what Canada, Germany, Holland, and other nations are already doing. Immigrants stimulate cultural vitality, innovation, and broad-scale employment, as has happened before in history. Globally, the United States works effectively and cooperatively to catalyze greater international community and understanding.

More and more Americans take pride in the energy, inclusiveness, and creativity of the nation. E pluribus unum is reaffirmed.

The government cracks down hard, pleading crisis and the need for extreme emergency measures. Congress passes laws restricting immigration and civil liberties. The Administration increasingly intimidates journalists and others who raise voices of protest.

Meanwhile millions of poorer folk are priced out of comprehensive health insurance.

Increased violence and nationalist reactions in other nations further destabilize international order. A new arms race between the U.S., Russia, China, and India is soon in full swing.

The Commander in Chief replaces democratically-committed generals with those who sympathize with repressive measures and long for spectacular military victories.

Announcing extreme national crisis, the President suspends habeas corpus and other constitutional liberties, as President Lincoln did temporarily in 1863 during the U.S. Civil War.

And so forth. You get the idea.

I suppose the worst-case scenario would involve nuclear war, but I won’t go there.

The End for Now

Notice that I have not mentioned Nazism. Readers who know twentieth-century history will already have made connections.