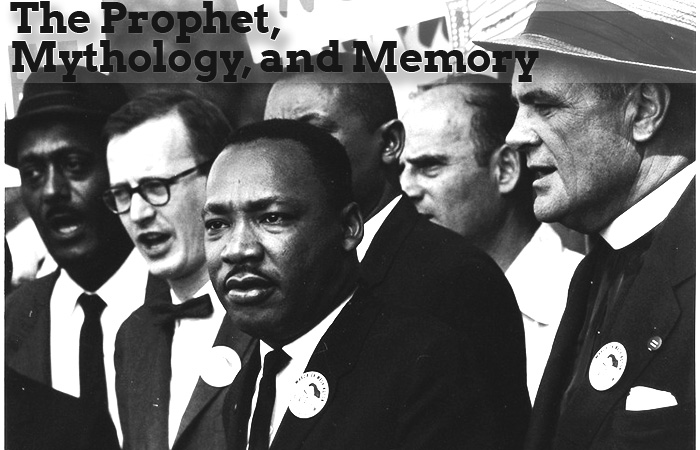 The prophetic community is positioned within a larger political economy and possesses its own distinctive memory—a memory which maneuvers its members into a recognized, mutual mythology,[1] effectively causing them to remember[2] the past and readily internalize its ideals. This mythology and its ideals are always at odds with the mythology propagated by the dominant culture.

Located within the larger, white landscape of American religious mythology, the black, Christian community possessed its own religious memory. This memory had no use for ideas such as Manifest Destiny, divinely sanctioned societal structures propagated by the powerful, or even the Enlightenment. Rather it knew its own religion had been used to dominate persons who stood in the way of Manifest Destiny. It knew those divinely sanctioned social structures were not objective realities, but rather tools of oppression and exclusion. And it knew the Enlightenment was only beneficial to people who were invited to participate. So due to their suffering and exclusion, the black tradition adopted its own mythology, one united with the biblical storyline in a way most whites had lost the ability to value.

Whereas the white, Christian tradition had long argued over the distance between the Bible and the modern reader, the black tradition knew nothing of the ugly wide ditch between faith and history. By rejecting Enlightenment ideologies (or being excluded from them) the black tradition escaped the shackles of the rationalistic, individualistic mythologies of white America. They were able, therefore, to cultivate a unique mythology where they could cast themselves as participants in the drama of Scripture and redemptive history.

While their white brothers and sisters had long since abandoned allegorical and typological methods of interpreting the Bible, the African American tradition clung to the, because they were the instrument through which they could identify themselves in biblical narrative. “The black church not only sought to locate truth in the Bible, in order to derive lessons from it, but also extended the Bible into its own worldly experience.”[3] Not a dead tome of a distant era, the Bible in the black tradition lives and breathes, and therefore assists in both survival and revolution.

King mainly relied on typology in his preaching because inherent therein lies the capacity of the congregation to re-live, in their own experience, the event of the text. The “types transcend distances of time and space and help create a sense of participation in a unified reality.”[4] Due to this participatory reality, typology “sustains the hearers at a deeper level” than historical-critical methodology.

One main example of King’s typological interpretations involves his employment of Exodus and Exile imagery. Though unique neither to King nor to the black tradition, Exodus and Exile imagery evoked a shared religious memory which allowed communal participation in the biblical narrative and the ability to see their current plight in light of a larger theological paradigm. “By implicitly comparing the liberation of American blacks to the struggle of the ancient Israelites to escape from the bondage of slavery in Egypt, the civil rights struggle is drawn into the divine economy and becomes an extension of it.”[5]

But King takes the typology even further. As Lischer notes, it would have been easy enough to see the black community as Israel and the white oppressors as Egypt. But King even sees similarities between African Americans who are satisfied with their current situations of subjugation and the Israelites who wished to stay in slavery:

When Moses led the children of Israel from the slavery of Egypt to the freedom of the Promised Land, he discovered that slaves do not always welcome their deliverers. They would rather bear those ills they have…But this is not the way out… My friends, we cannot win the respect of the white people of the South or elsewhere if we are willing to trade the future of our children for our personal safety and comfort. Moreover, we must learn that passively to accept an unjust system is to co-operate with that system, and thereby to become participants in its evil.[6]

In summation, in King’s prophetic ministry the Bible is not an artifact of the past ready and willing to be pillaged for proverbial quotations only possibly applicable to the present day interpreter. Rather, “it involves identification that collapses history, replacing chronological time with a form of sacred time that allows biblical characters to become peers and contemporaries.”[7]

[1] I use “mythology” here, not as equivalent to fiction, but as a formative narrative which has etiological value for the prophetic community. It often provides the symbols and metaphors which sustain and empower the community. The historicity of the story is irrelevant.

[2] Brueggemann uses the word “memory” here, but I prefer the word remembrance. Memory focuses on the individual’s past. But remembrance is more active, and focuses on remembering for the sake of the future. Remembrance is a verb, not a noun, and parallels with God’s remembrance which involves eschatological promise which demands response, as opposed to merely recollection of a past event which elicits little in the way of necessary response.