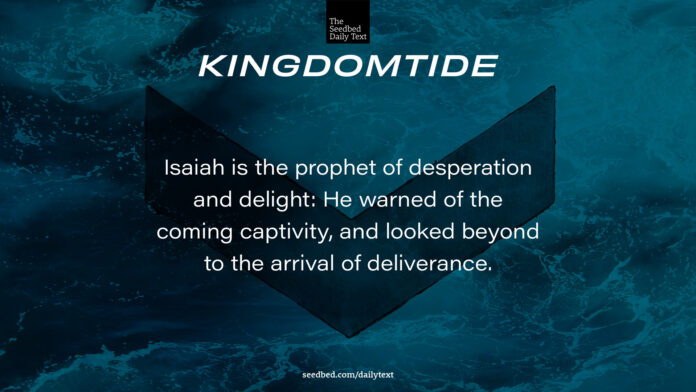 “Holy, holy, holy is the Lord Almighty; the whole earth is full of his glory.”

At the sound of their voices the doorposts and thresholds shook and the temple was filled with smoke.

Then one of the seraphim flew to me with a live coal in his hand, which he had taken with tongs from the altar. With it he touched my mouth and said, “See, this has touched your lips; your guilt is taken away and your sin atoned for.”

Then I heard the voice of the Lord saying, “Whom shall I send? And who will go for us?”

Vision is how we see the world. That’s not exactly a groundbreaking thought. But we often go about our day-to-day business giving no consideration at all to the lens through which we perceive. What is our vision of the world? What is our vision for the present and future? More than what we see, we should ask, how do we perceive?

Isaiah received a vision. And it transformed his ability to see. It radically reordered the ways he viewed the past, present, and future. For a brief, life-quaking moment, the curtain was pulled back and he was able to catch a glimpse of the baseline reality of this universe—Yahweh is enthroned as the one and only God, unrivaled in his reign.

It revealed two things that seem contradictory at first. It infused Isaiah with desperation and delight. Desperation over his own sin and the sin of his people in light of this all holy God. But it also generated delight because this all-holy God was cleansing them of that sin and clearly has the undisputed power to see them through anything they face as a people.

Isaiah is the prophet of desperation and delight. He warned of the coming captivity. And looked beyond to the arrival of deliverance. He proclaimed judgment for Israel’s rebellion and sin. And declared that the Messiah is coming, with rescue and redemption in his wake.

This vision gave him a way to perceive. And he was never able to see the world in the same way again.

Holy, holy, holy God, lifted high above all things, give us a vision of your glory by which we may see everything else. Amen.

What is your dominant vision of the world? How would you describe the view from where you stand?

For the Awakening,
Matt LeRoy