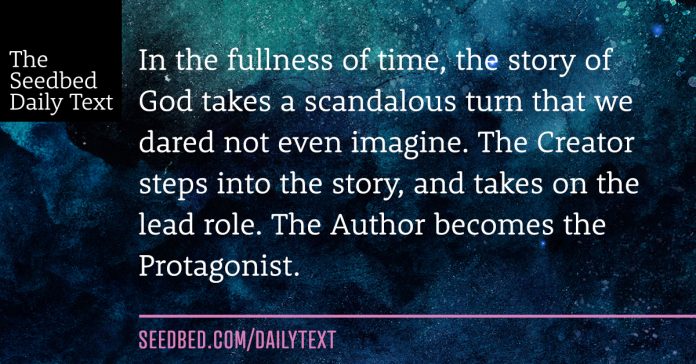 Dear Daily Text Community, I am pleased to introduce you to our Advent Daily Text leader, Matt LeRoy. Matt and his brother Josh will guide us through the weeks ahead. I have known Matt now for over a decade. He has been a believer and contributor to our work with Seedbed since day one. I’ll say more as we move along, but wanted to get in my welcome today!
J. D. Walt

14 The Word became flesh and made his dwelling among us. We have seen his glory, the glory of the one and only Son, who came from the Father, full of grace and truth.

15 (John testified concerning him. He cried out, saying, “This is the one I spoke about when I said, ‘He who comes after me has surpassed me because he was before me.’”) 16 Out of his fullness we have all received grace in place of grace already given. 17 For the law was given through Moses; grace and truth came through Jesus Christ. 18 No one has ever seen God, but the one and only Son, who is himself God and is in closest relationship with the Father, has made him known.

C.S. Lewis once made this observation, pointing out that William Shakespeare knew all there was to know about Hamlet, the character he invented. His motivations, his fears, his hopes. Shakespeare put the words in his mouth and the paths beneath his feet and the shape to his world. And the character could experience the creator through the echoes of his voice in every line of dialogue, his fingerprints on every detail of the setting. Yet the character could never break out of the play or move off of the page and into the world of the playwright. Hamlet could never meet Shakespeare.

Unless, of course, the author wrote himself into the story.

If the creator made himself one of the characters, if he scripted himself into the play, then he could make himself known to the cast. He could be heard, seen, touched by them. Then, and only then, could Hamlet meet Shakespeare.

Every analogy breaks down somewhere, and any analogy about God caves in at an accelerated pace. But this is a hint toward the mystery of the Incarnation. During this season of Advent, we long for the arrival of Jesus at Christmas. We wait with hopeful anticipation for him to step into the story. Bound by our sin and locked in our fallen world with no way to break ourselves out, reconciliation with God was an impossible dream. We could never get to him. Our only hope is that he comes to us. And in the fullness of time, the plot takes a scandalous turn, that we dared not even imagine.

The Creator steps into the story, and takes on the lead role.

The Author becomes the Protagonist.

“All the world’s a stage,” the bard once wrote.

And the One who built the theatre and crafted the script prepares to make His entrance.