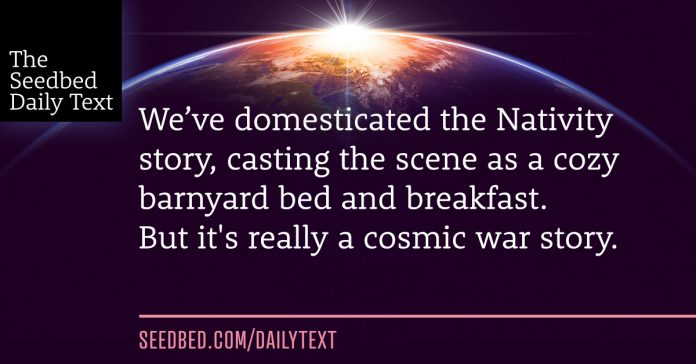 1 Then I witnessed in heaven an event of great significance. I saw a woman clothed with the sun, with the moon beneath her feet, and a crown of twelve stars on her head. 2 She was pregnant, and she cried out because of her labor pains and the agony of giving birth.

3 Then I witnessed in heaven another significant event. I saw a large red dragon with seven heads and ten horns, with seven crowns on his heads. 4 His tail swept away one-third of the stars in the sky, and he threw them to the earth. He stood in front of the woman as she was about to give birth, ready to devour her baby as soon as it was born.

5 She gave birth to a son who was to rule all nations with an iron rod. And her child was snatched away from the dragon and was caught up to God and to his throne.

A couple of years ago, my middle daughter (then five) had a foot-tall Darth Vader figure destroy Bethlehem in her Fisher-Price Nativity scene set. Then she surrounded Vader with the animals, shepherds, wise men, Mary and Joseph in front of the manger. I could almost hear him breathing, “Jesus, I am not your father.”

It was not your typical Nativity scene. Very violent and “dark side of the force,” like today’s text, were John describes the spiritual realm on Christmas morning.

In a sense, we’ve domesticate the Nativity story, casting the scene as a cozy barnyard bead & breakfast. But John’s vision shows the birth of Christ as a cosmic war story, with Satan going after Jesus at his birth.

Now Satan is someone we either pretend doesn’t exist, or blame for every bad thing that happens (#DevilMadeMeDoIt). Neither is helpful, and I don’t want to give the devil too much credit. But Scripture shows he is part of the story.

Later in Revelation 12 John writes: 7 Then there was war in heaven. Michael and his angels fought against the dragon and his angels. 8 And the dragon lost the battle, and he and his angels were forced out of heaven. 9 This great dragon—the ancient serpent called the devil, or Satan, the one deceiving the whole world—was thrown down to the earth with all his angels.

In Luke 10:18 Jesus said, “I saw Satan fall from heaven like lightening!”

1 Peter 5:8-9 says: 8 Stay alert! Watch out for your great enemy, the devil. He prowls around like a roaring lion, looking for someone to devour. 9 Stand firm against him, and be strong in your faith.

And Ephesians 6:11-12 reminds us: 11 Put on all of God’s armor so that you will be able to stand firm against all strategies of the devil. 12 For we are not fighting against flesh-and-blood enemies, but against evil rulers and authorities of the unseen world, against mighty powers in this dark world, and against evil spirits in the heavenly places.

Jesus in the manger is the light in the darkness. But when we see the darkness he’s coming in to, we have to recognize there is more going on behind the scenes. Pete Greig, in his book Dirty Glory, says:

“Satan’s not particularly interested in sin. His primary objective has never been to tempt you into violating a particular set of rules. His number-one aim is simply to divert your attention away from Jesus. He’ll use sin to do it, for sure. But he’s equally able to use busyness, or shame, or pain, or religion… or an obsessive relationship, or a golf handicap, or a pay raise, or an illness to distract you from the Lord. Satan hates the fact that when we fix our eyes on Jesus, broken relationships get fixed, and when we love him with all our lives… then death itself can lose its sting.”

This is the enemy who sold Adam and Eve the lie that led to humanity’s mission failure. And this is the enemy who was going after Jesus at his birth… the birth to redeem the lie we all suffer under. The enemy didn’t take it well then, and still doesn’t now. I believe that’s why Satan tries to distract us with smokescreens like the “Merry Christmas” verses “Happy Holidays” skirmish. It’s an intentional tactic to take our eyes off the real battle.

This week, as Advent turns to the stable, we must still remember the clouds. Jesus’s return is the final victory, but his birth is the transfer of power from darkness to light; to “on Earth as it is in heaven.” This is not the domesticated, warm-fuzzy, “live” Nativity scene version we’re used to telling. This is God loving the world so much that he would not only give, but risk, his Son being born. That’s why we take a season to get ready, because there really is a war on Christmas.

Jesus, you are our armor against the plans of the enemy. Help us to be alert and aware, trusting that the battle is yours. As we move through Advent, would your final victory bring us hope, and would your first arrival bring us joy. In your name we pray. Amen.