The Reason for the Season(s) - Seedbed
close
Menu 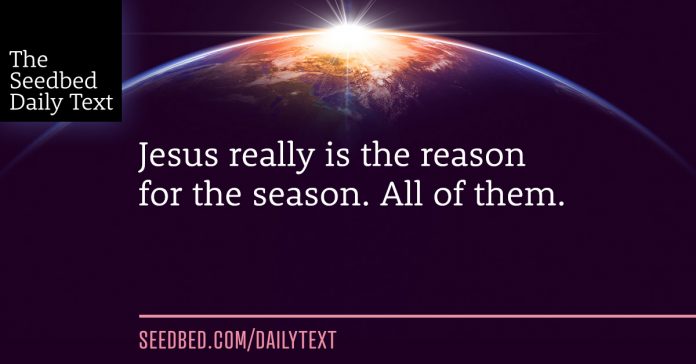 1 In the beginning the Word already existed.
The Word was with God,
and the Word was God.
2 He existed in the beginning with God.
3 God created everything through him,
and nothing was created except through him.
4 The Word gave life to everything that was created,
and his life brought light to everyone.
5 The light shines in the darkness,
and the darkness can never extinguish it.

Today I’d like to settle the “Jesus is the reason for the season” kerfuffle.

Yesterday, I shared the story of the Apollo 8 astronauts reading the creation story from Genesis 1 as they orbited the moon. They said they chose this text because it would be safe for all religions.

To be sure, “In the beginning God created the heavens and the earth,” is a statement most Jews, Christians, or Muslims would agree with. However, John’s telling of the creation story creates a conflict.

He makes it all about Jesus: “God created everything through him (Jesus), and nothing was created except through him.”

And the writer of Hebrews agrees when he writes, “. . . through the Son [God] made the universe and everything in it.”

The author Sally Lloyd-Jones says it poetically in her children’s book, The Jesus Storybook Bible, with the story of Jesus calming the storm over the Sea of Galilee: “The wind and the waves recognized Jesus’ voice. They had heard it before, of course—it was the same voice that made them in the very beginning.”

In other words, before time, before creation, before sin, there was Jesus. The apostle Paul echoes John in Colossians 1:15-17:

15 Christ is the visible image of the invisible God.
He existed before anything was created and is supreme over all creation,
16 for through him God created everything
in the heavenly realms and on earth.
He made the things we can see
and the things we can’t see—
such as thrones, kingdoms, rulers, and authorities in the unseen world.
Everything was created through him and for him.
17 He existed before anything else,
and he holds all creation together.

In the beginning, Jesus. In the end, Jesus. It’s why Advent is a season, not just a day.

Because seasons form us. They tell which stories have the power to control the trajectory of our desires, time, money, resources, and affections. We orient ourselves to seasons, and in turn they orient us.

Think about it. Football season; hunting season; the school calendar; the fiscal year; the sacred days like the Fourth of July and Super Bowl Sunday… these and others dominate the orbits of our lives.

It’s why the seasons of the Church calendar orbit around the life of Christ:

Remember, Advent is an opportunity to once again let the Church’s seasons, not the world’s, set the orbit of our lives—for the sake of the world God loves.

So it’s settled, then. Jesus really is the reason for the season.

Heavenly Father, we want the life of your Son to set the rhythm and trajectory of our desires, time, money, resources, and affections. By the power of your Holy Spirit, please orient our lives to Jesus, so that he can orient how we live our lives. In his name we pray. Amen.

1) What is your favorite non-church calendar season and why?
2) How much does it shape who you are and what you do?
3) What do you think of the idea of the life of Christ setting the orientation of your life?