The Role of Religion in Public Life - Seedbed
close
Menu

Recently, the Public Religion Research Institute (PRRI), a respected nonpartisan research organization dedicated to the intersection of religion, values, and public life, released the newest, and perhaps most nuanced, study on the rise of the religiously unaffiliated. The new study, “Exodus: Why Americans are Leaving Religion—and Why They’re Unlikely to Come Back,” makes its argument clearly: times are changing, and while the future of religious adherents and their institutions is not set, it will definitely not look like past. As people’s religious beliefs and practices change or decline, how will that affect politics, local communities, and civil society? 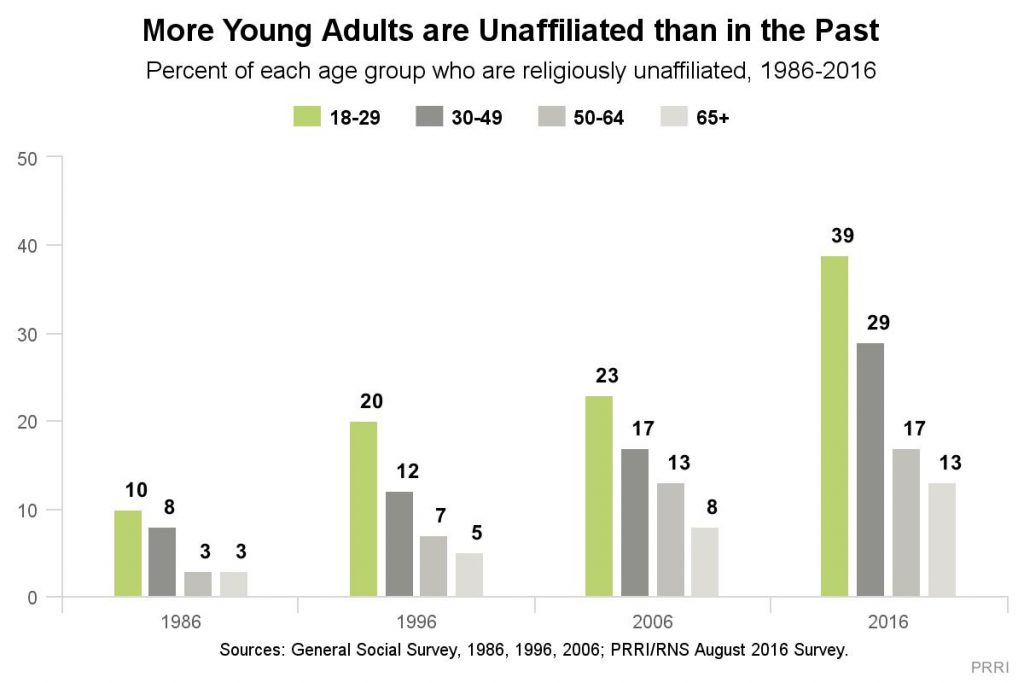 Professor of Religion in Public Life at Trinity College, Mark Silk, has anointed 2016 as “The Year of the None.” PRRI’s poll found that 25% of Americans now identify as religiously unaffiliated (doubling the 12% that would identify similarly just 20 years earlier in 1996). The number is even starker among millennials where 39% identity as “nones.” When comparing generational cohorts, we find tremendous differences between older and younger adults. As PRRI suggests, while there are “modest differences between middle-aged Americans (age 50 – 64) and seniors… there is a substantial gap between Americans over the age of 50 (15%) and those under the age of 50 (33%).” Baby boomers have more in common with their parents than they do their children when it comes to religious affiliation, and most of the research points to the fact that younger unaffiliated cohorts are not coming back to the religious institutions they left behind.

What are the reasons people are leaving their faith behind? One factor is certainly the shifting nature of institutions and the ways in which people find community. Fewer people attend civic organizations such as Rotary Clubs or weekly services at their local faith communities. But PRRI’s survey noted that it was more than just an institutional allergy that led people to disaffiliate. For a majority (60%) of the unaffiliated, it was more the fact that they no longer believed in the religion’s teaching over a response to political or cultural issues. Of course, family dynamics were also very important. Thirty-two percent of the unaffiliated named the low level of interest in religion they observed within their family of origin as a chief reason. This was particularly true among divorced families or religiously mixed households. While institutions matter, it appears that the beliefs and practices of individuals and households may matter even more.

Of course, all religiously unaffiliated Americans are not the same. One contribution the PRRI survey makes is parsing several types of unaffiliated:

Despite these diverse responses, still only a third of the unaffiliated would say they do not believe in a God. At the same time, they are not claiming to be “spiritual but not religious.” A clear majority would dismiss both terms. Few are actively looking to find a religious community, but they also do not seem to be replacing religious institutions with their own individual spirituality. 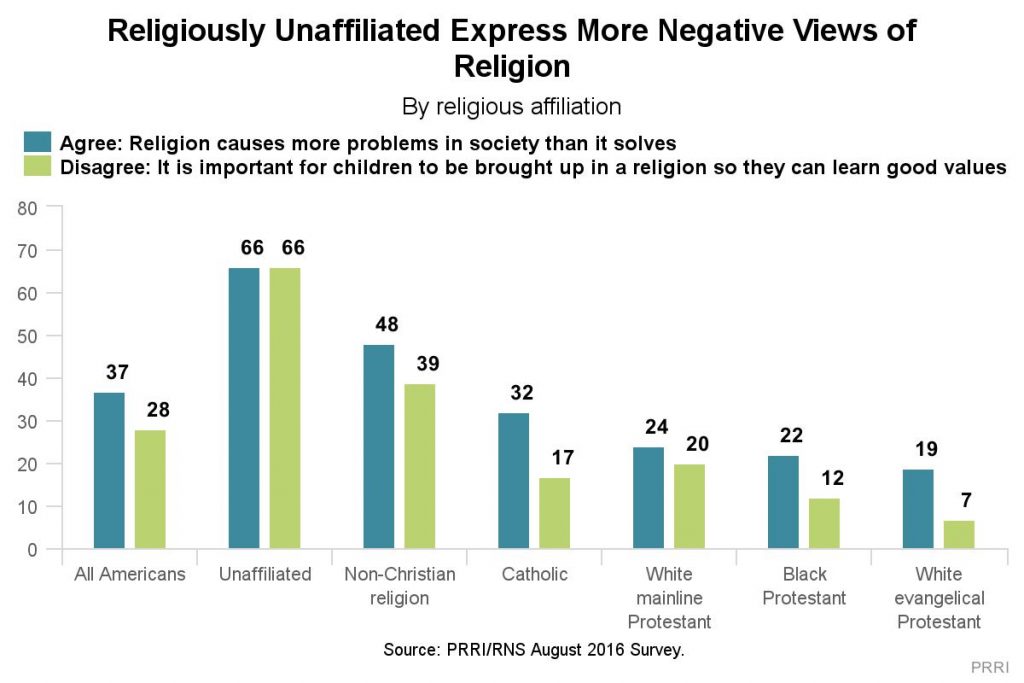 Beyond individual spirituality, however, is the question of religion’s role in society. A majority of the unaffiliated say that religion does more harm than good. When asked if belief in God is necessary in order to be moral and have good values or to instill values to children, the percentages agreeing were quite low, with the exception of the unattached believers who still found religion a major factor. What, then, does this have to say about religion’s role in society? One might argue that religion has often served as the glue binding cultures and communities together even if clearly, while, at other times, it has served to divide.

Faith is not disappearing – remember, 75% of Americans name a specific religious identity – but its public role is clearly changing. How will this lack of faith shape the unaffiliated? Current surveys point to the fact that they may be the fastest growing potential voting bloc, but they are less likely to vote than almost any other group. Does this predict a loss of community and civil society? If not, what new forms might take shape as people form relationships in new ways?

The rise of the religiously unaffiliated is clearly connected to trends we see in giving to and through faith-based organizations, but what specific takeaways might we offer? First, many of these trends apply to more than just the unaffiliated. Institutional allergies, changing attendance patterns, and religious switching between traditions run throughout the American context. For leaders tasked with raising funds within a faith community, we should no longer simply presume a trust or allegiance to our institutions. That is a luxury that we can no longer afford. Instead, we must make the case for why our institutions matter. We must be clear about our mission, vision, and values. We must be willing to partner with others when we share a common purpose.

If more and more Americans see religion as harmful over helpful to our society, faith communities must be intentional about sharing a counter-narrative, providing specific illustrations of working with others for change on the most pressing issues and needs in our society. A clarity of purpose and broad community interaction is much more important long term, over simply more effective fundraising techniques.

Finally, there is a paradigm shift away from institutions and towards individual donors. We must not only be clear about who we are and be able to tell our story, but we must also be ready and willing to listen. As the PRRI study makes plain, the religiously unaffiliated are not all the same. Again, we cannot presume to know someone’s story. Listening to the stories of the ways in which religious or spiritual motivations might affect the morals and values that individuals hold is essential. Attending to our own institutional assumptions, while avoiding presuming the motivations of others, might just allow us to elicit new languages for the ways in which a person’s faith or values empowers their way of living in the world. With these new approaches, we might rekindle a role for religion in public life – or at least present new opportunities to discuss the role of meaning and morality in the ways we live and in the ways we give.

© Seedbed 2021
The Role of Religion in Public Life
MORE STORIES