The Seductive Hell of a Predictable Situation - Seedbed
close
Menu 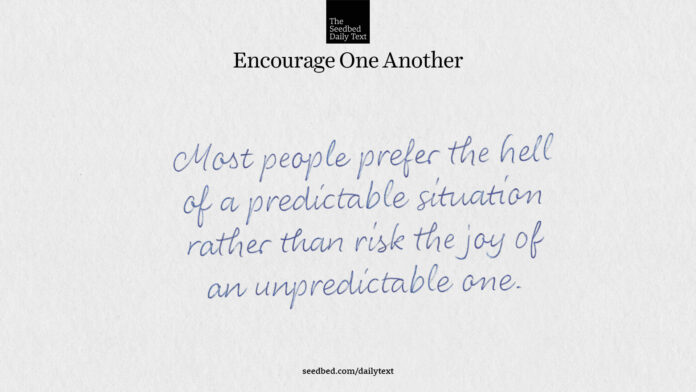 The Lord said to Moses, 2 “Send some men to explore the land of Canaan, which I am giving to the Israelites. From each ancestral tribe send one of its leaders.”

3 So at the Lord’s command Moses sent them out from the Desert of Paran . . .

When Moses sent them to explore Canaan, he said, “Go up through the Negev and on into the hill country. 18 See what the land is like and whether the people who live there are strong or weak, few or many. 19 What kind of land do they live in? Is it good or bad? What kind of towns do they live in? Are they unwalled or fortified? 20 How is the soil? Is it fertile or poor? Are there trees in it or not? Do your best to bring back some of the fruit of the land.” (It was the season for the first ripe grapes.)

Today we come to another text from which we can glean lessons on what it means to “Encourage one another daily, as long as it is called today.”

We come to the famed story of the twelve spies. I call it the Minority Report. Encouragement in the biblical sense of the term most often comes in the form of a minority report. The will, calling, and assignments of God are most often unconventional and occasionally downright outlandish. The math rarely adds up. It requires a suspension of rational judgment and an immersion into the imagination of Jesus and the Kingdom of Heaven. God fights swords with trumpets. Then he takes the swords and beats them into plowshares.

Setting the stage—the Israelites had journeyed out of Egypt, miraculously walked through the Red Sea on dry ground, been led by a pillar of cloud by day and a pillar of fire by night, fed manna every morning and quail in the evening, drank water from rocks and the list goes on. As they neared the promised land God led Moses to develop a reconnaissance mission with twelve spies to scout out the territory.

The wilderness had not been easy. It never is. This story will show us something deeply embedded in the human condition—how people will readily choose a known misery over an unknown possibility. There is something deep and dark about the law of sin and death that will lead even redeemed people to return to darkness and death, even slavery and abuse, rather than risk freedom, flourishing and joy by choosing an unknown possibility and an uncertain future. This is why encouragement is so critical for to both to give and receive. Maxie Dunnam puts it best: “Most people prefer the hell of a predictable situation rather than risk the joy of an unpredictable one.”

Many people we meet, every single day, are fighting a difficult battle, confronting hard circumstances, facing an uncertain future. It is why we must encourage one another daily, as long as it is called today so that we will not be hardened by the deceitfulness of sin.

Father, I get it. There is something about a predictable future, even if it is a hellish one, that can give us comfort. We get used to it. We lose sight of what once was or what could be. It is so darkly seductive to slowly acclimate to the ever dimming light. And the longer we live in this place, it can be so hard to even imagine what you can do. Come Holy Spirit and bring awakening. Teach us to encourage each other in ways that awaken us to your possibilities and stand on your promises. Turn our eyes upon Jesus. In his name we pray, amen.

Are you living in a predictably less than promising and hopeful situation right now? Know anyone who is? Are you open to deep encouragement in said situation? Are you ready to encourage others in truly empowered ways?