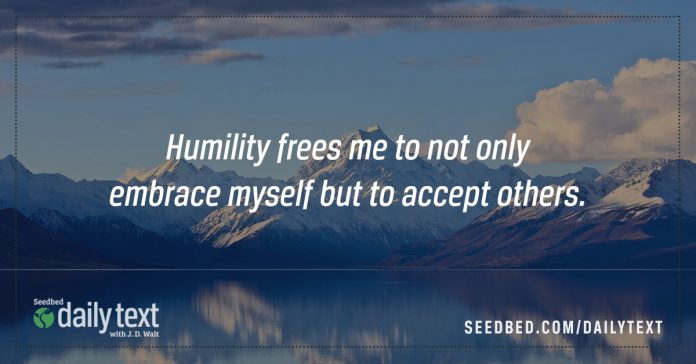 Humility is the fear of the Lord; its wages are riches and honor and life.

Sometimes it helps me to understand something when I reframe it according to it’s opposite meaning. For instance, todays text:

Humility is the fear of the Lord; its wages are riches and honor and life.

Pride is the absence of the fear of the Lord; its wages are poverty and shame and death.

It begs the question: what then is humility? Humility is so often thought of as a set of behaviors that look like self deprecation and self abnegation. I think this is exactly wrong. Humility is the deeply human disposition of a person who has come to know and embrace their deepest worth.

“who being in very nature God, did not consider equality with God something to be grasped, but made himself nothing; and taking on the nature of a servant, being made in human likeness and found in the appearance of a man, he humbled himself. . .”

Take a look from this angle.

Jesus knew that the Father had put all things under his power, and that he had come from God and was returning to God; so he got up from the meal, took off his outer clothing, and wrapped a towel around his waist. After that he poured water into a basin and began to wash his disciples feet, drying them with the towel that was wrapped around him. John 13.

See it there? Humility isn’t the noble decision to somehow lower yourself. It’s the audacity to embrace who you most truly are as a human being; a person whose worth is not earned from a performance but conferred upon by a Creator. The notion of earning one’s worth from a performance is the essence of pride. The notion of embracing one’s worth as a gift from God is the essence of humility. Pride enslaves me to the never ending bondage of distinguishing myself from others by becoming something other than what I am. Because all of my energy is directed at creating a false sense of self (propping myself up) I am prevented from embracing my true self. Because of my need to distinguish myself from others I can’t accept them either. James warns us about bitter envy and selfish ambition, characterizing them as the signs of false wisdom and nothing less than demonic evil.

Humility frees me to not only embrace myself but to accept others. After all, we are the same—all of us—equal. Even better, humility frees me to authentically love others because I can finally love myself. Even better, this kind of love finds its deepest springs in a love for God that flows out of God’s love for us. This is why humility is wisdom. It’s one of the things that most amazes me about Jesus washing his disciples feet. John characterizes that act as Jesus showing his disciples the “full extent of his love.”

Humility and the fear of the Lord are the beginning of wisdom, but the end of wisdom is the Love of God and the love of one’s neighbor as oneself.

I’ll see you tomorrow in Proverbs 23.

Abba Father, you had an intention and a purpose when you created me. Because I trust you I want to realize your intention and purpose for myself. Forgive me when my trust fails and I try to remake myself in the image of someone or something else. Come Holy Spirit and fix my eyes on Jesus. Teach me to behold him that I may become like him. It is in his name I pray. Amen.

1. Why are people bent on trying to make themselves into something they aren’t?

2. Is my own sense of self worth tied to my own performance or accomplishments, achievements or lack thereof?