The Thing Jesus Wants The Most From Us - Seedbed
close
Menu 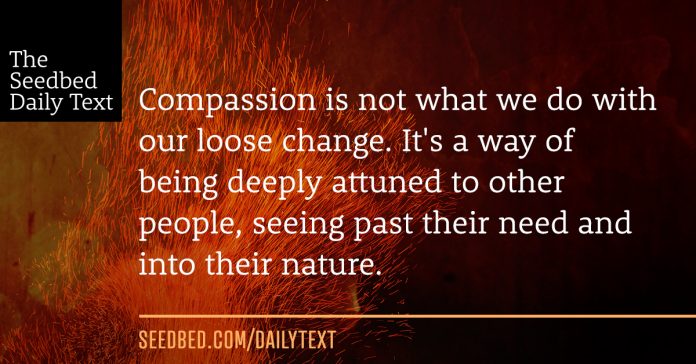 37 But he answered, “You give them something to eat.” They said to him, “That would take more than half a year’s wages! Are we to go and spend that much on bread and give it to them to eat?”

When they found out, they said, “Five—and two fish.”

39 Then Jesus directed them to have all the people sit down in groups on the green grass.40 So they sat down in groups of hundreds and fifties. 41 Taking the five loaves and the two fish and looking up to heaven, he gave thanks and broke the loaves. Then he gave them to his disciples to distribute to the people. He also divided the two fish among them all.42 They all ate and were satisfied, 43 and the disciples picked up twelve basketfuls of broken pieces of bread and fish. 44 The number of the men who had eaten was five thousand.

O.K., so this post, like yesterday’s, goes into extra innings. Refill your coffee. This one has massive implications for us if we are willing.

89. When faced with a big challenge or problem our first impulse usually involves some kind of calculation of how much money it would take to solve the problem. I think this is part of why Jesus pitched the problem to the disciples, to see how they would solve it. Predictably, they got out their calculators and determined it would cost half a year’s wages. Somehow I think Jesus was hoping they might remember that great catch of fish he engineered; the one that almost sank two boats. I think Jesus probably hoped they might appeal to him for help. There’s a good word in here for us when faced with large challenges—start with Jesus. Entreating the Lord is not a last ditch effort. It’s the starting point.

90. There’s an even better approach. Take on challenges so large that if Jesus doesn’t intervene you will fail. The disciples saw a problem. Jesus saw people. Yesterday’s text captured the heart of God for the human race.

he had compassion on them, because they were like sheep without a shepherd.

If I had been one of those disciples I would have been looking at my watch, wondering when this thing would finally end so we could get on with our plans. Remember, this was unplanned. Compassion is not a pre-planned mission trip (though these can be filled with compassion). Compassion is a Holy Spirit formed disposition deep within one’s inner person. As Jesus constantly demonstrates, compassion is the nature of God. Compassion is not what we do with our loose change. It’s a way of being deeply attuned to other people, seeing past their need and into their nature. Compassion happens when the brokenness of the image of God in me beholds the brokenness of the image of God in another. It moves me from  the posture of “helping a brother out,” to the place of holding a brothers’ pain. It’s hard. It costs us a lot more than money. It requires giving ourselves away.

Compassion is to charity as a long steady rain is to a water sprinkler. This is precisely what God is like. This is who the Holy Spirit is making us to be. It’s not about giving more, as good as that may be. Compassion is about becoming a new kind of person. Even as I write, I find myself asking, “Do I really want to become compassionate?” Half a year’s wages actually sounds a lot easier. It makes me realize how giving money can be such a substitutionary charade for true generosity.

91. Finally, we come to the miracle. I’m beginning to think this is exactly what Jesus had in mind from the get go. The retreat was a holy ruse. Why do I think that? The text was careful to tell us earlier about the extreme demands and out of control activity of the disciples. They had been pushed past their limits. Then he invites them on a retreat only to follow it with a request to feed five thousand people. The conditions were perfect for something of a miraculous object lesson.

First, Jesus gave the twelve a picture of what real limitations and scarce resources look like: five loaves and two fish. (Imagine trying to feed fifty kids with a single hotdog). I think the bigger comparison here is between these meager rations and twelve helpers.

Second, he has them sit down in groups of hundreds and fifties. Why do we need to know this detail? I think it’s because he wanted the disciples to know this detail. How else would we know there were five thousand people there? This is not a preacher’s inflated estimate of the attendance on Easter Sunday.

Third, Jesus doesn’t balk at the impossibility of the challenge at hand.

41 Taking the five loaves and the two fish and looking up to heaven, he gave thanks and broke the loaves. Then he gave them to his disciples to distribute to the people.

He did exactly what he does at every meal. Four moves: He took. He blessed. He broke. He gave. There’s a hidden curiosity here though. The verbs, “took,” “blessed,” and “broke” are past tense verbs. “Gave,” translates into English as past tense but the Greek text renders this in the imperfect tense. The imperfect verb tense points to an action done in the past that keeps on moving indefinitely into the future. In other words, the fishes and loaves were being continuously multiplied in his hands. It’s not like all of a sudden five thousand fishes and ten thousand loaves materialized on the scene. No, the miracle was happening over and over and over and over again in the movement from his hands to theirs.

92. The crowd didn’t see this, but the disciples couldn’t have missed it. I think this is the point. Just like those meager rations, so were these disciples, but upon being offered to Jesus something extraordinary happened. He would bless them and break them and make them a gift to the world—an unending source of extravagant, compassionate generosity.

These four verbs would present themselves again at the most mysterious, miraculous, meaningful meal in the history of the world.

This is about surrender.

Spirit of the Living God, fall afresh on me. Lord Jesus, I feel like I am surrendered to you but there is so much I hold on to. Something deep in me will not let go of control. I find myself bouncing between being charitable and generous, which I think pleases you; yet I know deeper down it’s not what you desire most. You want me—whole-heartedly, unreservedly, without my calculated self interest. I want this too, I think. Melt me. Mold me. Fill me. Use me. For the glory of your name, Jesus, Amen.

What keeps you from releasing control of yourself and surrendering yourself completely to Jesus? What would be the sign to Jesus and to you that you have done this?