The True Nature of Our Struggle: Psalm 18 - Seedbed
close
Menu 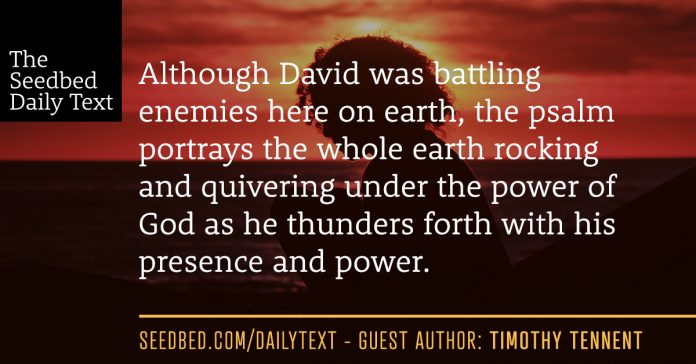 2 The Lord is my rock, my fortress and my deliverer;
my God is my rock, in whom I take refuge,
my shield and the horn of my salvation, my stronghold.

3 I called to the Lord, who is worthy of praise,
and I have been saved from my enemies.
4 The cords of death entangled me;
the torrents of destruction overwhelmed me.
5 The cords of the grave coiled around me;
the snares of death confronted me.

6 In my distress I called to the Lord;
I cried to my God for help.
From his temple he heard my voice;
my cry came before him, into his ears.
7 The earth trembled and quaked,
and the foundations of the mountains shook;
they trembled because he was angry.
8 Smoke rose from his nostrils;
consuming fire came from his mouth,
burning coals blazed out of it.
9 He parted the heavens and came down;
dark clouds were under his feet.
10 He mounted the cherubim and flew;
he soared on the wings of the wind.
11 He made darkness his covering, his canopy around him—
the dark rain clouds of the sky.

46 The Lord lives! Praise be to my Rock!
Exalted be God my Savior!
47 He is the God who avenges me,
who subdues nations under me,
48     who saves me from my enemies.
You exalted me above my foes;
from a violent man you rescued me.
49 Therefore I will praise you, Lord, among the nations;
I will sing the praises of your name.

50 He gives his king great victories;
he shows unfailing love to his anointed,
to David and to his descendants forever.

Psalm 18 emerges out of the historical account of 2 Samuel 22 when David had been granted victory over his enemies. The psalm appears in the historical account of 2 Samuel 22:1–51 and then appears here in the Psalter. This psalm demonstrates the cosmic dimensions of our earthly struggles. Although David was battling enemies here on earth, the psalm portrays the whole earth rocking and quivering under the power of God as he thunders forth with his presence and power (vv. 7–9). The picture of God reaching down from heaven to save and rescue (vv. 16–17) is a powerful foreshadowing of the incarnation. Ultimately, it is in Christ that the heavens were truly parted, and God came down to vanquish our foes.

David’s struggle, finally, was not against the household of Saul or the Philistines. The early church’s struggle was not, finally, against Pilate or the warnings of the Sanhedrin. Our struggle is not against any political party, or forces of evil arrayed against us. In the final analysis, our struggle is a cosmic one. Paul says, “For our struggle is not against flesh and blood, but against the rulers, against the authorities, against the powers of this dark world and against the spiritual forces of evil in the heavenly realms” (Eph. 6:12). Paul is speaking of the great cosmic struggle, against which God in Jesus Christ has prevailed through the cross and resurrection. We sing this psalm with Christ, God’s Son, the resurrected One! He alone was rewarded for his righteousness and is the truest voice of Psalm 18:20: “according to my righteousness” and the “cleanness of my hands he has rewarded me.” This points us far beyond any righteousness that belonged to David. Rather, it points us to the righteousness of great David’s greater son, Jesus Christ. He alone has kept the path of the Lord. When David declares that this victory was not merely for himself, but for “his descendants forever” (v. 50), this is a clear sign of a victory that transcends David’s historical setting. This psalm points to and celebrates that great victory of the Lord on behalf of his church. We, too, can fully share in this victory.