The Twelfth Apostle, Then and Now - Seedbed
close
Menu 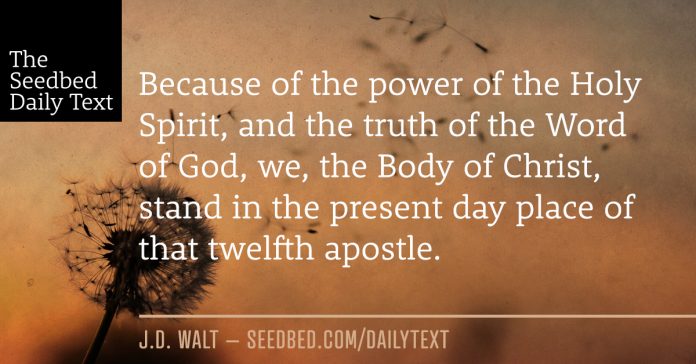 In those days Peter stood up among the believers (a group numbering about a hundred and twenty) and said, “Brothers and sisters, the Scripture had to be fulfilled in which the Holy Spirit spoke long ago through David concerning Judas, who served as guide for those who arrested Jesus. He was one of our number and shared in our ministry.”(With the payment he received for his wickedness, Judas bought a field;there he fell headlong, his body burst open and all his intestines spilled out. Everyone in Jerusalem heard about this, so they called that field in their language Akeldama, that is, Field of Blood.)“For,” said Peter, “it is written in the Book of Psalms:“‘May his place be deserted;    let there be no one to dwell in it,’and,“‘May another take his place of leadership.’Therefore it is necessary to choose one of the men who have been with us the whole time the Lord Jesus was living among us, beginning from John’s baptism to the time when Jesus was taken up from us. For one of these must become a witness with us of his resurrection.”So they nominated two men: Joseph called Barsabbas (also known as Justus) and Matthias. Then they prayed, “Lord, you know everyone’s heart. Show us which of these two you have chosen to take over this apostolic ministry, which Judas left to go where he belongs.” Then they cast lots, and the lot fell to Matthias; so he was added to the eleven apostles.

There’s one thing I want you to notice from today’s text. I want you to note the Apostles way finder. Scan the bolded words from the passage above. This apostolic community had a very simple strategy: Scripture. They were a community of one book. They understood their lives as extensions the story of Scripture.

Here they were, post Ascension, pre-Pentecost, not sure where to turn or what to do. They faced the first improvisational moment of the Body of Christ. What did they do? Peter emerged with the key leadership strategy of publicly remembering their story.

Of course they had to have a twelfth apostle. How could they lead a twelve tribe team with eleven players. And not just anyone would do. They needed real-deal first generation disciple, someone who had been there from the start, who witnessed THE BAPTISM, who tasted the water-turned-wine at Cana, who helped unload the boatloads of fish, who gathered up the twelve baskets of leftovers after feeding five thousand with five loaves and two fishes. They had to have someone who struggled with them at the oars as their boat nearly capsized on the Sea of Galilee, who witnessed the chaotic waves obey the word of his command.  They needed a twelfth man who knew Lazarus and Zaccheus and Mary and Martha. They needed a replacement, an Apostolic understudy who knew the script and sat under the teaching of the One in whom the Spirit dwelt beyond measure. These things couldn’t be explained to a Johnny-come-lately. This twelfth player needed the prerequisite class taught at the Garden of Gethsemane and the existential experience of failing  with the rest of them to show up at the cross. Finally, and most essentially, they needed someone who had seen the risen Lord and beheld  him ascend into the sky.

And they got their guy. But you want to know the real miracle? Because of THE POWER  OF THE HOLY SPIRIT, and THE TRUTH  OF THE WORD OF GOD, we, the Body of Christ, stand in the present day place of that twelfth apostle.

We are the apostolic witnesses. This is the story we find ourselves in. Oh that we might be people of one book.

What would it mean to start seeing yourself as the “twelfth apostle?” How would that change your discipleship? How would it change the way you approached the Word of God? The Spirit of God?