The Two Groups Down at the Church - Seedbed
close
Menu 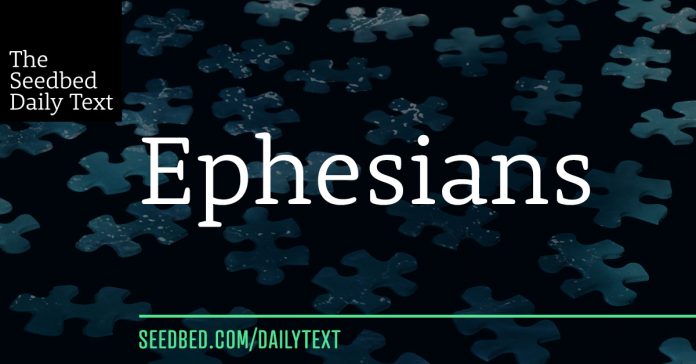 17 Now this I affirm and insist on in the Lord: you must no longer live as the Gentiles live, in the futility of their minds. 18 They are darkened in their understanding, alienated from the life of God because of their ignorance and hardness of heart. 19 They have lost all sensitivity and have abandoned themselves to licentiousness, greedy to practice every kind of impurity. 20 That is not the way you learned Christ! 21 For surely you have heard about him and were taught in him, as truth is in Jesus.

Something I have rarely considered is what it must have been like for Paul to write these letters. We know he was in prison at the time, but I have never thought much beyond. He likely dictated his letters to an assistant who captured his words, yet I don’t think this quite captures it.

Paul is not trying to pack himself into his words as much as he is trying to unleash the Word of God through them. Remember, these letters are not coming from Paul. They are coming through him. Preachers will grasp exactly what I’m talking about here because we all struggle at this point. So often I want to get my words right rather than simply allowing THE Word to dwell richly in and through me.

Paul is not so much writing here as he is preaching. He is bearing witness to a Word that is coming to him and allowing it to pass through him. The way today’s text begins signals this.

“Now this I affirm and insist on in the Lord:.”

I picture Paul rising to his feet and moving about the cell in the way a preacher moves; not for effect, but because the preacher is being moved. The Greek word behind “insist” is martyromai. It means “to witness.” You already recognize the root of the word‚—martyr, which is the same word we see in Acts 1:8 where Jesus told his disciples, “But you will receive power when the Holy Spirit comes on you; and you will be my witnesses . . .”

This notion of witness as martyr captures the whole essence of faith and discipleship. A martyr, in the New Testament sense, is not someone who is going to die for Jesus, but someone who has already died with him—and been raised from the dead! (I feel myself starting to preach, which is precisely the point I am trying to make.) Maybe someday the Lord will let me say more about this in an appropriate venue. The text beckons us onward now.

you must no longer live as the Gentiles live, in the futility of their minds.

From the little church in Ephesus to (insert your church and town here), there are two groups of people in every congregation. One group consists of the church in the world, while the other is the world in the church. Paul here speaks to the latter, those who have joined the church without letting go of the world.

Note, I didn’t say “leaving” the world, but letting go of the world and all its ways. The failure to understand and sort this is the downfall of many, resulting in a double-minded life that is neither hot nor cold. Rather than a life of joyful awakening, discipled around the indwelling Spirit of God, the world subtly yet forcefully divides our desires and affections along paths of sensual delight, ultimately leading to spiritual sleep. The “culture of indulgence” all-around us quietly becomes the “crisis of indifference” within us. It’s why so far this year I have put more money on my Starbucks Card than in the offering plate. And what does this have to do with coffee? O.K., you asked. Nothing and everything. (The problem is not the coffee. It’s the $8 Double-Venti-Six-Shot-No Water-Extra-Hot-Chai Tea Latte!) ;0)

Feel the force of the text.

They are darkened in their understanding, alienated from the life of God because of their ignorance and hardness of heart. 19 They have lost all sensitivity and have abandoned themselves to licentiousness, greedy to practice every kind of impurity.

Remember yesterday when Paul talked about “speaking the truth in love.” Well, this is that. ;0) Remember why this matters so much? Because, as the text says, “we must grow up in every way into him who is the head, into Christ.”

The problem is not the world around us that alienates us from the life of God. It’s the world within us. Jesus’ interest is not taking us out of the world but taking the world out of us. Jesus wants us to be his witnesses, fully alive “in him,” smack dab in the middle the world.

Abba Father, we thank you for your son, Jesus, whose vision for us is so much brighter and richer and more powerful than the mirage offered by the world around us. Awaken us. Awaken me to a new delight in you. Rescue me from my indifference and fill me with the life of God. We pray in Jesus name, amen.

© Seedbed 2021
The Two Groups Down at the Church
MORE STORIES