The Two Major Movements of the Gospel - Seedbed
close
Menu

42 Jesus said to them, “Have you never read in the Scriptures:

“‘The stone the builders rejected
has become the cornerstone;
the Lord has done this,
and it is marvelous in our eyes’?

43 “Therefore I tell you that the kingdom of God will be taken away from you and given to a people who will produce its fruit. 44 Anyone who falls on this stone will be broken to pieces; anyone on whom it falls will be crushed.”

45 When the chief priests and the Pharisees heard Jesus’ parables, they knew he was talking about them. 46 They looked for a way to arrest him, but they were afraid of the crowd because the people held that he was a prophet.

The Bible is remarkably consistent in its upside-down, counterintuitive realities. Down is the new up. Least is the new great. Last is the new first. Moses, the slave baby, the boy who lived, surviving genocide becomes a privileged child of Pharaoh’s palace. Later rejected by the palace, he found himself wandering as a shepherd. Again, he went from his obscure exilic reality to lead the nation of Hebrew slaves out of Egypt. It’s stunning.

Abraham and Sarah, in their aging, childless, descent to the grave are chosen by God to be the Father and Mother of a great nation. Gideon, the least of his family who was the least of the tribe and a bonafide coward is chosen to lead God’s people in triumph over the  fierce Midianite armies. And then there’s David, not even considered as a possible candidate among his brothers for Samuel’s kingly anointing, who turns out to be the King who united Israel.

The stone the builders rejected has become the cornerstone;

That which is rejected becomes radically over-accepted. The poor are lifted up. The captives are set free. The blind see. The deaf hear. The lame walk.  The dead are raised. The lepers get to go back home. Treasonous tax collectors become chosen disciples. The Son of God is crucified and on the third day he arose from the grave.

The stone the builders rejected has become the cornerstone;

The cross of crucifixion, the most cruel sign of rejection in the ancient Roman Empire, has become the central and most celebrated symbol in the story of redemption, indeed in the history of the world.

the Lord has done this, and it is marvelous in our eyes.

Over-acceptance and re-incorporation. This is the way of God, the rule of the Kingdom of Heaven, the mark of the work of the Lord. Indeed, it is marvelous in our eyes.

Heavenly Father, thank you for your Son Jesus, who shows us the way of the Cross, which is the way of profound reversal—the place where that which is rejected gets over accepted and re-incorporated in a way beyond our imagining. It’s marvelous, Lord. Teach me this way that I may walk in it. Give me eyes to see it. Come Holy Spirit and do it. In Jesus name, Amen. 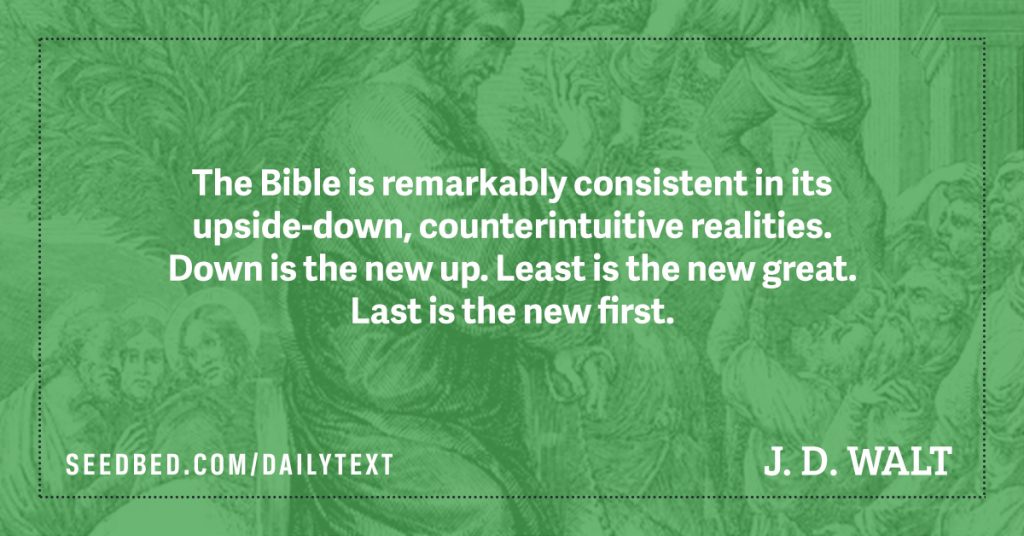 2. Can you point out ways Jesus went to the rejected and over accepted them, reincorporating them into the community?

3. How are you growing in your understanding of the counterintuitive dynamics of the Kingdom of God? i.e. down is the new up, last is the new first, etc. Do you struggle with this? Why?

** I’m indebted to Samuel Wells for this insight concerning Over-acceptance and re-incorporation as the essence of the movement of the Kingdom of God.