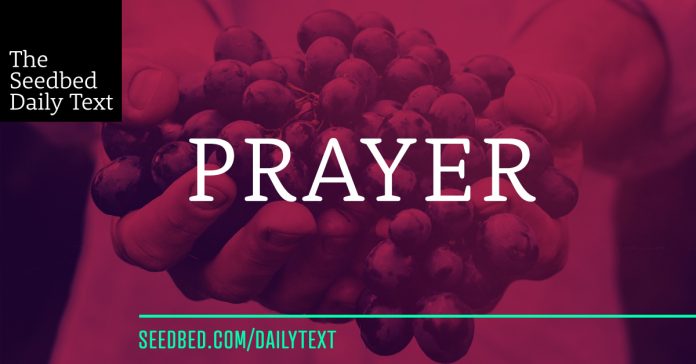 8 The Amalekites came and attacked the Israelites at Rephidim. 9 Moses said to Joshua, “Choose some of our men and go out to fight the Amalekites. Tomorrow I will stand on top of the hill with the staff of God in my hands.”

In today’s text we see a picture of what intercession looks like. In the blue corner we have the attacking Amalekites. In the red corner we have Joshua and the Israelites. On top of the hill we have General Moses and two Lieutenant Colonels in Aaron and Hur.

Traditional military strategy would tend to put all the emphasis on Joshua and his army. This battle seems to rise and fall on other factors; namely the position of Moses’ staff. When his staff is raised up, Israel prevails. When the staff is lowered, Israel loses ground. The staff is not magic, rather it is a symbol of the power of God.

Why didn’t God sovereignly cause Israel to win the battle? I think it’s because God wills to work with, in, and through people. Intercessors, servants who stand between God and people, play key roles in the Kingdom of God. It’s interesting how Moses is not on the battle field yet he plays the determinative role in the battle. Moses does nothing of apparent significance or perceived strategic importance. He raises a piece of wood in the air. Moses participates in the most essential secret strategy of identifying himself completely with God. He stands in a place where he can take no credit for the outcome yet without his standing there the outcome would go the other way.

In this way, intercessors occupy the most secret and most strategic place of all in the economy of God’s Kingdom. Their job description, if you will, is to identify so completely with the interest of the Holy Spirit in any given assignment they receive they can tend to lose touch with their own interest. As a result, intercessors can tend to be some of the most misunderstood people in the Kingdom. And yes, they can be more than a little bit weird at times.

While intercessory prayer is a general and broad practice in the church, the role of intercessor is unique and quite specific. It is both a gifting and calling. You tend to know it if you have it. It can’t be taught, but it can be trained.

They exemplify and embody two texts from the New Testament in extraordinary ways.

“But we have this treasure in jars of clay to show that this all-surpassing power is from God and not from us.” 2 Corinthians 4:7.

There is another role identified in the text that seems equally critical to the role of the intercessor. Let’s call it the intercessors for the intercessor. Aaron and Hur came alongside Moses and supported him in his intercessory role. In fact, had they not held up his arms, Israel would have lost the battle.

Finally, note the way Moses celebrated the victory. I’m sure he expressed gratitude to Aaron and Hurr and high-fived Joshua and his warriors. It would have been tempting for Moses to take a little credit and share in the glory, especially after being so vociferously criticized earlier. He resisted that temptation.

15 Moses built an altar and called it The Lord is my Banner.

Lord Jesus, you are right here, right now. You are my banner. Teach me the meaning of this truth and grace me with the humility to live and move and have my being underneath this banner. Right here, Jesus. Right now, Jesus. Amen.

P.S.  In our work we think the most meaningful and practical way to do the work of Aaron and Hurr is through a discipleship band, and we think everyone needs one. I’ve given you a rest from my regular drumbeat on this call to action. I’ll be coming back to you soon with good news and loads more encouragement on this front.