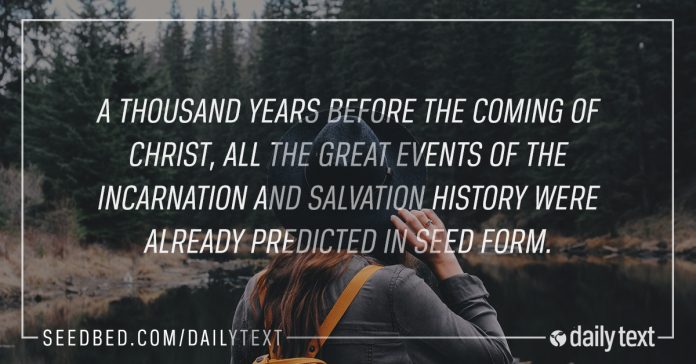 The LORD says to my lord:
“Sit at my right hand
until I make your enemies
a footstool for your feet.”

The LORD will extend your mighty scepter from Zion, saying,
“Rule in the midst of your enemies!”
Your troops will be willing
on your day of battle.
Arrayed in holy splendor,
your young men will come to you
like dew from the morning’s womb.

The Lord is at your right hand;
he will crush kings on the day of his wrath.
He will judge the nations, heaping up the dead
and crushing the rulers of the whole earth.
He will drink from a brook along the way,
and so he will lift his head high.

This psalm is quoted more than any other psalm in the Bible (17 citations). In its original setting, it was a coronation psalm celebrating the enthronement of a new king on the throne of Israel. However, the psalm uniquely has the LORD (the holy, covenantal name of God, often known as YHWH) addressing the king as Lord: “The LORD said to my Lord, sit at my right hand until I make your enemies a footstool for your feet.”

The earliest Christians in the New Testament recognized that “fuller sense” (sensus plenior) to which this psalm prophetically points (For an explanation of sensus plenior, see the meditation on Psalm 68). Through the lens of New Testament revelation, we know that this psalm beautifully celebrates the enthronement of Jesus Christ at the right hand of God the Father. In fact, it is this verse which is used as the climactic text in the very first recorded Christian sermon in history. On Pentecost Sunday, Peter declares that it is Jesus who fulfills this passage because he is now seated at the right hand of God the Father. Through the enthronement of the resurrected Jesus, he has been made “both Lord and Christ” (Acts 2:34-36).

It is here, in the very first sermon of the church (Pentecost is considered the ‘birthday’ of the church) that we begin to see that the early church saw Christ in the psalms. As Jesus himself pointed out to the Pharisees, how could God refer to David as Lord unless there was a deeper mystery to this psalm (Matthew 22:41-46)? In fact, the psalm was pointing to much more than the reign of David. It was pointing to the eternal kingship of Jesus Christ and the Father’s declaration that he would make all the enemies of God bow down at the feet of his true messianic King.

The latter part of the psalm resolves a long standing problem in messianic fulfillment. How could the messiah be both king and priest, since the kingship is always traced through the tribe of Judah (the line of David) and the priests all came from the tribe of Levi? How could one person be both king and priest? The answer is that there was an earlier priesthood of Melchizedek which even Abraham submitted to. “You are a priest forever, in the order of Melchizedek” (vs. 4). Jesus is born in the kingly line of David, but is a priest through this more ancient Order to which all the nations of the world must submit. Finally, the psalm points to the final judgment when Christ will bring justice to the world.

This psalm demonstrates that even a thousand years before the coming of Christ, all the great events of the incarnation and salvation history were already predicted in seed form. It is not merely that a few dozen psalms prophetically point to Christ. Rather, Jesus is the ultimate subject and singer of all the psalms. We will see this truth illuminated again in Psalm 118. He alone is the righteous one depicted in Psalms 1 and 15 who alone has walked unsoiled along the way of the righteous. It is Jesus who cries out in the psalms for the vindication of the righteous. It is Jesus who heralds the day when all things will be made right. It is Jesus who alone is the only truly innocent sufferer. In one bold stroke on the very first day of the Christian church, when Peter quotes Psalm 110 and applies it to Christ, the entire psalter is opened up to us in a new way. It is Jesus who is the enthroned One. It is Jesus who is the priest according to the Order of Melchizedek. It is Jesus who stands as the final judge of the world! What an assurance for those of us who have placed our trust in him.