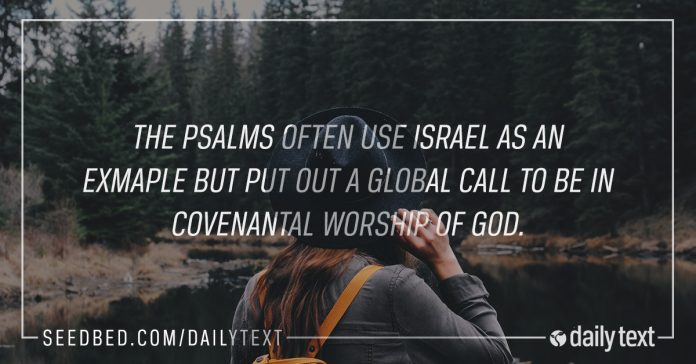 I know that the LORD is great,
that our Lord is greater than all gods.
The LORD does whatever pleases him,
in the heavens and on the earth,
in the seas and all their depths.
He makes clouds rise from the ends of the earth;
he sends lightning with the rain
and brings out the wind from his storehouses.

He struck down the firstborn of Egypt,
the firstborn of people and animals.
He sent his signs and wonders into your midst, Egypt,
against Pharaoh and all his servants.
He struck down many nations
and killed mighty kings—
Sihon king of the Amorites,
Og king of Bashan,
and all the kings of Canaan—
and he gave their land as an inheritance,
an inheritance to his people Israel.

The idols of the nations are silver and gold,
made by human hands.
They have mouths, but cannot speak,
eyes, but cannot see.
They have ears, but cannot hear,
nor is there breath in their mouths.
Those who make them will be like them,
and so will all who trust in them.

Though Psalm 135 begins and ends with an admonition to praise the LORD that is very specific to Israel, it is actually a very global psalm with a wise admonition for all peoples throughout the whole earth. After four verses of calling Israel to worship (using the covenant name of Yahweh 7 times, along with many phrases associated with the chosen people), the psalmist then declares that Israel’s God, the LORD, “is greater than all gods” (vs. 5).

What follows in the psalm is a sweeping account of the Lord’s mighty acts – from ordering the affairs of creation itself, to sending plagues upon Egypt, to killing the kings of foreign nations, to giving their lands to His people Israel. The reason given for these righteous judgments is then disclosed – because all idols are nothing, and must be shown to be nothing. This is as true for our idols today as it was for the idols described in this psalm. “They have mouths, but cannot speak; eyes, but cannot see; they have ears, but cannot hear; nor is there breath in their mouths” (vv. 16, 17). So it is with all contemporary idols—they take from us, but have no power to impart anything to us. And then comes the scathing indictment of verse 18: “Those who make them will be like them, and so will all who trust in them.”

One can hear the warnings of Jeremiah 2:5 and Isaiah 42:17 and 44:9-20. One can also hear the foundation for Paul’s great sermon on Mars Hill in Acts 17:22-31. First, the warnings of the prophets are brought into an act of worship which is sung and rehearsed by God’s people in Psalm 135. And then, Paul’s lifetime singing of the psalms comes bursting forth in the midst of a spontaneous sermon about Jesus Christ on Mars Hill. This is the great formative power of singing, and the full canon instruction through worship, which the psalms provide.

Finally, in this very Israel-specific psalm, there is also a global call to all those on earth – to join in the worship of the one, true LORD, the God of the covenant. Just as we saw that Psalm 135 opens with the first four verses invoking the covenantal name of the LORD (Yahweh) seven times, so the Psalm closes with the covenantal name, LORD (Yahweh) used seven times. However, in the close of the psalm, we see the widening, global scope of those who are being called to worship the LORD. For in the midst of the final admonitions to praise which are directed once again to the chosen people (house of Israel, house of Aaron, house of Levi, respectively), comes a fourth unexpected address – “You who revere the LORD, bless the LORD” (vs. 20, NASB).

After reflecting upon the denouncing of idols found in this psalm, all who live on the earth are called to join with God’s people in praising him – for he is, indeed, the Maker of the heavens and the earth, and the One with whom we all have to do.