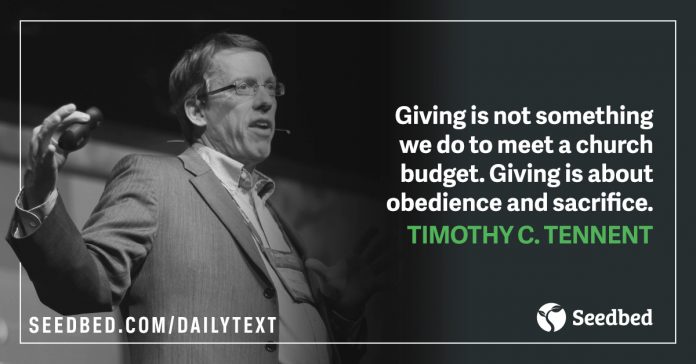 Jesus sat down opposite the place where the offerings were put and watched the crowd putting their money into the temple treasury. Many rich people threw in large amounts. But a poor widow came and put in two very small copper coins, worth only a few cents.

Calling his disciples to him, Jesus said, “Truly I tell you, this poor widow has put more into the treasury than all the others. They all gave out of their wealth; but she, out of her poverty, put in everything—all she had to live on.”

Today’s focus in on Christian stewardship. This is one of the more familiar accounts in the Gospel of Mark in which our Lord uses an actual event which happened during his earthly ministry in order to addresses the issue of giving money.

First, notice how the story is filled with dramatic contrasts. The whole passage stands in stark contrast to the displays of self-righteousness as the religious leaders are put in contrast to this quiet expression of true righteousness in the life of this poor widow. Another contrast is found in that rich are giving in order to be seen by men—they give in order to receive the praise and applause of others. The widow puts her coins in silently, in contrast to the way the rich would announce their gifts as they put them in the containers.

Second, notice why Jesus commended her. Even though she only put into the treasury what amounted to 1/8th of one cent, Jesus calls his disciples over and says, “I tell you the truth this poor widow has put more into the treasury than all the others.” Jesus commended the widow for her great sacrifice. Don’t miss that point. Because, Jesus continues, they gave out of their wealth—out of their abundance—she gave out of her poverty, putting in everything she had to live on.”

Even though most people who preach on this passage seem to draw out the point that Jesus is commending small offerings, it seems to me that they are missing the point. Some small offerings testify to people’s stinginess or to their lack of vision or their lack of faith. The point is that Jesus commended the incredible sacrifice which even this small gift represented.

Third, note that our giving is ultimately not about meeting the church budget. Obviously, we have a responsibility to maintain and nurture the church ministries to which we are connected. But even if the budgetary needs are met, it is still our responsibility to give. It is an issue of obedience. Giving is not something we do to meet a church budget. Mathematically, the two coins the widow offered added practically nothing to the total offering. It is about obedience and sacrifice.

Our giving to the Lord is actually one of God’s gifts to us. You see, giving is actually designed to be a part of God’s plan for a healthy life. It is one of our acts of worship. By giving we are reminded who is the source of everything we have. As Job said so well millennia ago, “naked we come from the womb and naked we shall return.” We brought nothing into this world, and we shall bring nothing out of it—except for our faith in God and our life before Him.

Giving makes us aware of the needs of those around us. Giving increases our capacity for compassion because it allows us to be touched by the needs around us, and, yes, to be a part of God’s work. It gives us a proper perspective on those things which God has entrusted to us.

I have called the widow’s gift ‘the mighty mite.” We can learn much from this poor widow. The owner of nothing, being watched by the owner of all things.

1. Do you see all that you have as a gift from Him? Is everything you have available for His use?

2. What practical steps can you take to enter into the joyful stream of God’s bounty as you give?