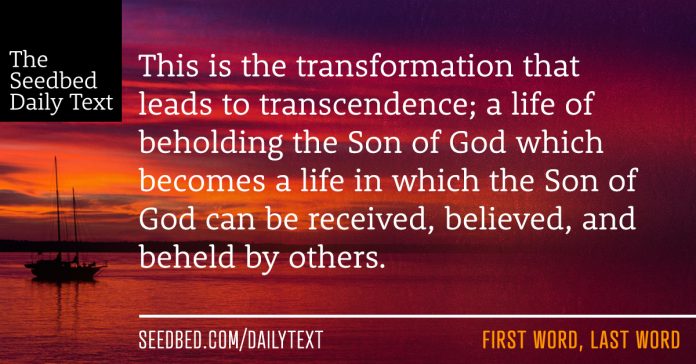 (John testified concerning him. He cried out, saying, “This is the one I spoke about when I said, ‘He who comes after me has surpassed me because he was before me.’”) Out of his fullness we have all received grace in place of grace already given. For the law was given through Moses; grace and truth came through Jesus Christ. No one has ever seen God, but the one and only Son, who is himself God and is in closest relationship with the Father, has made him known.

It is impossible to overestimate the revolutionary impact of these four words:

The eternal Word of God, the preexistent Son of God, the second person of the Trinity became a human being. The uncreated Creator became a begotten creature; conceived by the Holy Spirit, fully God, born of the Virgin Mary, fully human.

Let’s return to this cosmic creed Paul gave to the Colossians:

For God was pleased to have all his fullness dwell in him, and through him to reconcile to himself all things, whether things on earth or things in heaven, by making peace through his blood, shed on the cross. (Col. 1:19-20)

All the energy over the last hundred years or so has gone into leading people to believe in Jesus, the importance of which I do not wish to diminish. The trouble is we have settled into a transactional understanding of the Jesus and the gospel. To be sure, there is a transactional dimension—his righteousness for our sin, his suffering for our salvation, his death for our life. John 3:16 couldn’t be more clear: “For God so loved the world that he gave his one and only Son, that whoever believes in him shall not perish but have eternal life.”

The gospel has a transactional dimension, but the minute the gospel is reduced to a transaction is the minute it becomes something less than the gospel. Notice also the thrust of John 1:12 couldn’t be clearer: “Yet to all who did receive him, to those who believed in his name, he gave the right to become children of God.”

We have focused on the eternal part and neglected the life part. We have emphasized believing and short-sold becoming. We have championed getting people into heaven while forgetting about getting heaven into people. The gospel of Jesus Christ is not a transaction. It is an invitation to the kind of transformation that leads to a transcendent life—the glorious spectacle of real holiness.

The Word became flesh and made his dwelling among us.

This is so in order that the Word might become flesh in our own lives and communities. See how Paul weaves this same story with the Colossians:

I have become its servant by the commission God gave me to present to you the word of God in its fullness—the mystery that has been kept hidden for ages and generations, but is now disclosed to the Lord’s people. To them God has chosen to make known among the Gentiles the glorious riches of this mystery, which is Christ in you, the hope of glory. (Col. 1:25-27)

Father, thank you for your Word, which endures forever. Thank you for these four words that changed everything: The Word became flesh. This is such good news! And I know that as this same Word of God dwells in me I, too, become good news. Transcend my flesh with the glory of your presence that my ordinary life may become a place for your extraordinary love. Forgive me for settling for anything less. I pray in the name of your Son, Jesus. Amen.

Do you believe it is possible for the Word to become flesh in your life? Why or why not? Think of a time when you have experienced this? How might you experience this more?