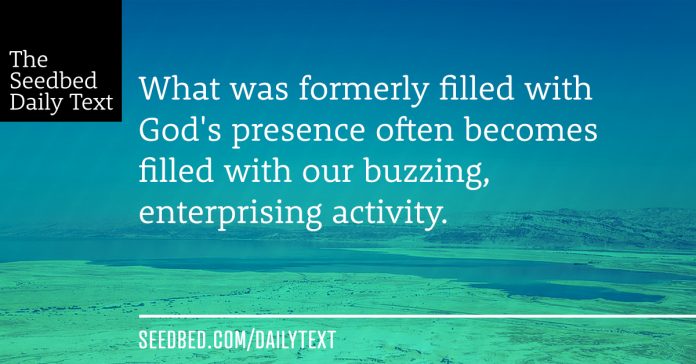 When it was almost time for the Jewish Passover, Jesus went up to Jerusalem. In the temple courts he found people selling cattle, sheep and doves, and others sitting at tables exchanging money. So he made a whip out of cords, and drove all from the temple courts, both sheep and cattle; he scattered the coins of the money changers and overturned their tables. To those who sold doves he said, “Get these out of here! Stop turning my Father’s house into a market!” His disciples remembered that it is written: “Zeal for your house will consume me.”

This feels like a ripe moment for a well-placed flashback. Let’s go back and visit this site about a thousand years earlier. Let’s remember the dedication of Solomon’s temple, predecessor to the one at issue today.

Yes, on this day a thousand years later, the glory of God was filling the temple again. The Word made flesh, the literal temple of the living God, had come to dwell in his own temple. Try this: The Temple paid a visit to the temple where he discovered that the temple had become something less than the Temple.

Stop turning my Father’s house into a market! he said.

The temple is the dwelling place of God and in the absence of God dwelling there we will fill it with everything under the sun.

According to today’s text, before the church was even the church it was already quite an enterprise. In the absence of the manifest presence of God, the best we can seem to come up with is some kind enterprise. I think that’s what happens when God leaves the building. What was formerly filled with his presence becomes filled with our buzzing, enterprising activity.

Stop turning my Father’s house into a market!

Could it be that before the temple can be filled again, it must first be emptied? It was as though on that day in Jerusalem Jesus was putting everyone on notice: there was a new temple in town—not a fixed building for religious observance but a moving tabernacle of demonstrative power.

Before we end today, let’s flash forward to another Temple-filling day, the day of Pentecost.

Suddenly a sound like the blowing of a violent wind came from heaven and filled the whole house where they were sitting. They saw what seemed to be tongues of fire that separated and came to rest on each of them. All of them were filled with the Holy Spirit and began to speak in other tongues as the Spirit enabled them. (Acts 2:2-4)

Notice how the glory of the Lord did not come to fill the building but to fill the disciples of Jesus.

The same is true now.

Abba Father, thank you for your Son, Jesus, the Temple of the living God. We can hardly grasp the fullness of your presence dwelling in Jesus, and now you ask us to imagine this same glory dwelling in us who follow him. Stretch our feeble minds and shallow hearts to begin to grasp this mystery: We are the temple of God. In Jesus’ name, amen.

1. What would it mean for Jesus to come cleanse or empty his temple today?

2.  Is your life being filled with other things that might be usurping or even displacing the presence of God?

3. Do you think we can be the temple of God by ourselves?