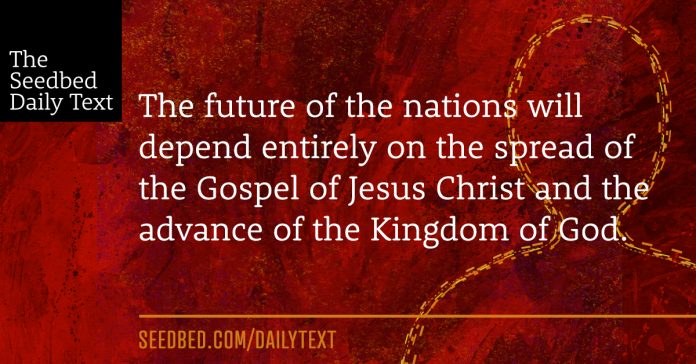 James, a servant of God and the Lord Jesus Christ, To the twelve tribes scattered among the nations.

To the twelve tribes scattered among the nations:

No, there is no such thing as a Christian nation. Before you denounce me and stop reading, ask yourself, what would a Christian nation be? A particular parcel of land? Could Tennessee be a Christian state? Is it the constitution or the governing structures that make a state or nation “Christian?” Is it the oaths a leader swears (which the bible seems to forbid) in the name of a certain God that makes a nation Christian? Would it be that a majority of the people in a nation subscribe in some capacity to some form of the Christian religion that make a nation Christian? We read regularly of territories or regions or nations declaring themselves an “Islamic State.” And they don’t seem to need a majority. Would a “Christian” state just be a different form of what they are talking about?

So maybe if everybody in a given nation and all of its laws and ordinances were taken exactly and explicitly from the Bible and its leaders were ordained by God to carry out the governance of such a place we might be getting closer to some concept of a Christian nation—but—is not this getting close to the idea of the Church? Was not this country founded, at least in part, on the wishes of its people to escape from a state-run by the church—which almost always invariably becomes a church run by the state? When people speak of America being founded as a “Christian” nation they mean that many of its founders and early leaders were real Christians and they acted accordingly as only a real Christian can do.

No, I don’t think a nation can be properly considered a “Christian” nation. So why did I answer the question as both no and yes? I believe the only entity that can actually be Christian is a human being and that a nation can only be “Christian” to the extent that its people are, in fact, real Christians.

What do I mean by “real Christians?” Thanks for asking. That’s exactly where James comes in and what James is all about. Over the holidays I began reading a book I had not known of before written by William Wilberforce. The title says it all:

“A Practical View of the Prevailing Religious System of Professed Christians, in the Middle and Higher Classes in this Country, Contrasted with Real Christianity.”

Wow! Don’t you wish we had book titles like this one today? Back to James. James opens his salutation as follows:

To the twelve tribes scattered among the nations.

The problem we have in the United States of America (and most every other nation on earth) is we don’t have enough real Christians. It is because of the failure of “so-called Christians” to be “real Christians” that we now have a disastrous welfare state trying to take care of the widows and orphans and the poor and aging. The failure of America (or any other nation) will not be laid at the feet of the non-believers. The success of America (or any other nation) will not come as a result of Christians somehow “taking back the nation,” as though the non-believers were our enemies. The future of the nations will depend entirely on the spread of the Gospel of Jesus Christ and the advance of the Kingdom of God. This will happen only to the extent that our churches cease trading our birthright for a pot of middle and upper-class suburban stew.

But you are a chosen people, a royal priesthood, a holy nation, God’s special possession, that you may declare the praises of him who called you out of darkness into his wonderful light. 1 Peter 1:9

When James talks to the twelve tribes scattered among the nations, that’s what he means. Let’s determine to take this very personally.

God our Father, forgive us for delegating the responsibility of being Christian on some nation or group or organization when only we can be Christians. I want to be a real Christian. Come Holy Spirit and lead me in this way. In Jesus name, Amen.

1. So what do you think about this idea of “no such thing as a Christian nation?”
2. Are you ready to begin (or deepen) your praying for great awakening in our land, from “so-called Christianity” to “real Christianity?”
3. Where do you find yourself these days? Are you a “comfortable” Christian; content with middle to upper class prosperity, or are you dissatisfied with the prevailing status quo of how the Christian faith has come to be practiced?