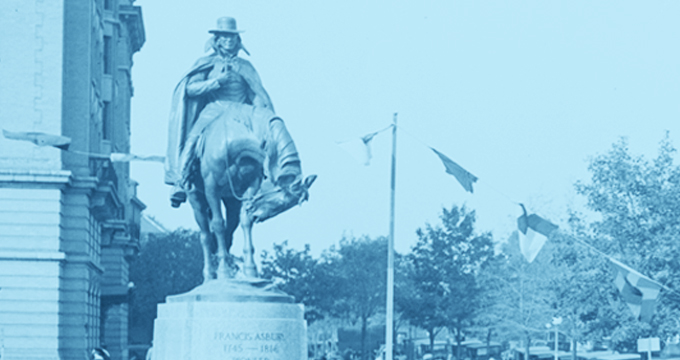 In October 15, 1924, Calvin Coolidge, the thirtieth president of the United States, stood to make a speech at the intersection of Mt. Pleasant and Sixteenth Street in our nation’s capital. He was there to dedicate a statue of a horse and rider. In this inspiring speech, the president remarked of Asbury, “He is entitled to rank as one of the builders of our nation.” Read part of the speech here then download the free Seedbed Short to read it in its entirety.

“Our government rests upon religion. It is from that source that we derive our reverence for truth and justice, for equality and liberty, and for the rights of mankind. Unless the people believe in these principles they cannot believe in our government. There are only two main theories of government in the world. One rests on righteousness, the other rests on force. One appeals to reason, the other appeals to the sword. One is exemplified in a republic, the other is represented by a despotism. The history of government on this earth has been almost entirely a history of the rule of force held in the hands of a few. Under our constitution, America committed itself to the practical application of the rule of reason, with the power held in the hands of the people.”

“It is of a great deal of significance that the generation which fought the American Revolution had seen a very extensive religious revival. They had heard the preaching of Jonathan Edwards. They had seen the great revival meetings that were inspired also by the preaching of Whitefield. The religious experiences of those days made a profound impression upon the great body of the people. They made new thoughts and created new interests. They freed the public mind, through a deeper knowledge and more serious contemplation of the truth. By calling the people to righteousness they were a direct preparation for self government. It was for a continuation of this work that Francis Asbury was raised up.”

“Just as the time was approaching when our country was about to begin the work of establishing a government which was to represent the rule of the people, where not a few but the many were to control public affairs, where the vote of the humblest was to count for as much as the vote of the most exalted, Francis Asbury came to America to preach religion.”

“When several of his associates left for England in 1775, he decided to stay. ‘I can by no means agree to leave such a field for gathering souls to Christ as we have in America,’ he writes, ‘therefore I am determined by the grace of God not to leave them, let the consequence be what it may.'”

“What a wonderful experience he must have had, this prophet of the wilderness! Who shall say where his influence, written upon the immortal souls of men, shall end? How many homes he must have hallowed! What a multitude of frontier mothers must have brought their children to him to receive his blessing!”

“America continues its own way unchallenged and unafraid. Above all attacks and all vicissitudes it has arisen calm and triumphant; not perfect, but marching on guided in its great decisions by the same spirit which guided Francis Asbury.”

Get the entire address here for free.