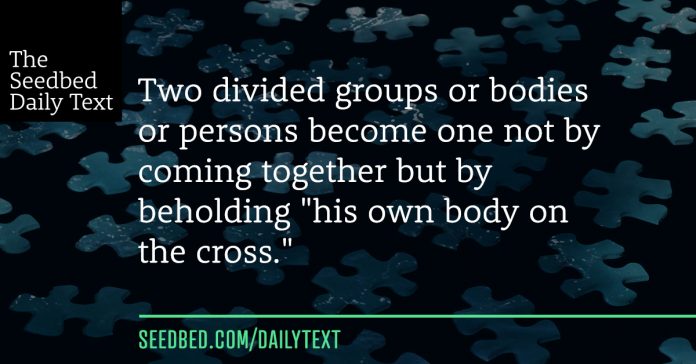 14 For Christ himself has brought peace to us. He united Jews and Gentiles into one people when, in his own body on the cross, he broke down the wall of hostility that separated us.15 He did this by ending the system of law with its commandments and regulations. He made peace between Jews and Gentiles by creating in himself one new people from the two groups. 16 Together as one body, Christ reconciled both groups to God by means of his death on the cross, and our hostility toward each other was put to death.

Those words—they say more than words can even say.

he broke down the wall of hostility that separated us.

If he did this between entire groups of people (i.e. Jews and Gentiles), how much more can he do it between individual persons (i.e. brothers and sisters, husbands and wives, Hatfields and McCoys).

Anyone who has been around for any length of time understands— either from personal experience or the evening news—the meaning of the the term, “the wall of hostility.” There are those Frostian “good fences that make good neighbors,” and then there are the “walls of hostility.”

We see them everywhere these days. Walls of hostility rage between men and women; between nation and nation; even between kids in school.

It’s not new. The walls of hostility rose up as we turned the page onto Genesis 3 with the hiding, blaming and shaming. In no time the hostility wall rose up between brothers as Cain murdered Abel. It’s the same song with endless verses. There’s nothing original about sin and death.

16 Together as one body, Christ reconciled both groups to God by means of his death on the cross, and our hostility toward each other was put to death.

There will be no peace apart from Christ. We may declare a truce, agree to a cease fire, sign an armistice, even manage an amicable divorce, but no real peace.

14 For Christ himself has brought peace to us.

We will not find peace built on the principle of Christ. We will not find our way to peace based on some kind of conceptual or forensic or ethical understanding of the death and resurrection of Jesus Christ.

The secret to Peace is found here:

Two divided groups or bodies or persons become one not by coming together but by beholding “his own body on the cross.” We must see in the deepest way of seeing the unutterable cost of these walls of hostility.

When my oldest son was young (maybe 5), he picked up a small crucifix from my desk. He asked me, “What do you use this for?” Before I could get out a wrong answer, he revised the question, asking, “Or is this for looking at?”

BOOM! I was undone. As I beheld the tiny crucifix in his small hand, I answered, “Yes, David, this is for looking at!”

“When I survey the wondrous Cross, on which the Prince of Glory died; my richest gain I count as loss, and pour contempt on all my pride.

“See from his head, his hands, his feet; sorrow and blood flow mingled down. Did ere such love and sorrow meet, or thorns compose so rich a crown.

O the Wonderful Cross, bids me come and die and find that I may truly live.”

LENTEN INSIGHT: Beholding the Cross is the essence of Lent. When is the last time you spent time simply looking at a crucifix or an image of Jesus crucified? It’s not about thinking any particular thoughts or conjuring up an emotional expression. The simple act of looking upon Jesus lifted up on the Cross for extended periods of time is a very Lenten thing to do.

Abba Father, we thank you for your son, Jesus, the one who became broken so we could be made whole. He is our Peace. Save me from the ideal of peace, and show me the way of Peace as a person; in his own body on the Cross. We pray in Jesus name, amen.